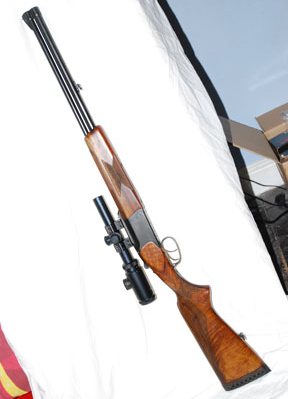 All the usual jokes about Baikal guns aside, they do make a solid and workmanlike product that (although not the sexiest thing in the world) will do the job come rain or shine… I think shotgun reviewer Mark Stone proved this when he looked at their over & under 12-bore a few months ago, as despite its poor relation looks and feel it can break clays with the best of them. Sometimes better; as it’s more about the pilot than the plane…

Baikal importers York Guns sent me two rather different guns for the hunter on a budget, multi-use keeper, or those wanting a knock about or client gun, it’s all here. First up the single shot IZH 1/8 in 308 Winchester.

I first encountered the IZH in 308 a few years ago as I used to shoot deer on ground up near Stratford upon Avon and the land owner had one. I commented that it looked rather basic and I would not fancy the recoil from this short, light cannon. Much to my surprise he came to the defence of the Baikal and told me it was his preferred gun as it was light, easy to handle, accurate enough and recoil friendly – given the build. I naturally tried it and he was correct; OK it was never going to win any beauty contests but it had the right stuff no doubt.

The IZH is based unsurprisingly on Baikal’s single barrel, 12-bore shotgun and uses the same butt and action. All they have done is to substitute a rifled barrel for the smooth bore tube. The woodwork is beech and plain in finish and design, the forend is a sort of beavertail and the butt shows a neutral build with a slim plastic butt plate.

The hammerless action opens by squeezing up on a lever at the rear of the trigger guard. A pin pops out of the tang to show when it’s cocked, the safety is a cross bolt inside the guard. For a basic design the barrel is fancy as it shows the classic spiral, hammer-forged profile, that is perhaps more familiar on Steyr Mannlicher guns…

Sights consist of an elevation-adjustable blade on a ramp up front and wide, U-notch plate at the rear which gives lateral correction. Backing this up is a short, 11mm dovetail over the chamber for scope mounting. Fixed sling swivels feature front and rear and the action is 'extract-only', with the fired case beign raised about 3/16” from the chamber where it has to be removed by hand.

As I recall my friend’s IZH had a one-piece scope mount, however York Guns supplied a set of Hawke rings to suit the slim base. Being quite long at about ¾” there is not enough room on the short rail to allow the normal fitting of a scope (one ring either side of the saddle) which is not ideal. You can just about do it with ½” long versions. If you were serious about this rifle the best bet would be to fit a length of Weaver rail to simplify things…

I managed to cobble together a mount as I has some slim rings which fitted the 11mm base. I used some Prvi Partizan 150-grain 308 soft tip and at 100 yards (rested) the rifle was printing 1-1 ½”. Not amazing, but good enough for 200/250 yards. The Baikal was well behaved, and though far from soft it was not terrible in the shoulder either. OK it’s no Remy 700, but at under £250 you can get yourself a tough working rifle that will do the job.

By comparison to the IZH the over/under Sever is far more up-market. Based on their O/U shotgun chassis the gun shows acceptable, oil-finished, walnut furniture with rather ugly but effective chequering. Odd is the fact that the upper (22 LR) barrel has a matching handguard over the top with finger grooves in it. Fittings go to a ventilated rubber recoil pad, sling swivels, basic front/elevation rear/windage iron sights and an 11m dovetail for scope mounting. By comparison to the rifle this is longer and did not pose the same problems the 308 did.

The action is totally familiar with twin triggers (forward top, rear bottom barrel), top lever and sliding, tang-mounted automatic safety catch. Opening up the action shows a single/combined extractor that lifts both cartridges up about ¼” where they have to be removed by hand. Barrels are separate and only joined at the muzzle and monobloc.

On the subject of combination guns and calibres the 22 Long Rifle barrel will be good for rabbits etc. and even the occasional close range fox. The 20-bore, though perhaps not carrying as much shot weight as a 12, is nonetheless highly effective and its slimmer size allows for a reasonably well proportioned gun in the hand. Baikal also offer other rifle calibre options that include 223 Rem, 308 Win, 30-06 and 9.3mm though I am not sure of the case length on this one…

For a 22 LR the barrel is long at 24”, which conversely is short for the shotgun side of the equation… One slight disadvantage being you cannot fit a moderator; personally I do not see that as a huge problem. The 20-bore tube is a multi-choke and comes with a key and three, flush fitting tubes. These are marked in the European fashion with slots around the edge to denote size as follows; F (full) 1-slot 0.581”, M (modified) 3-slots 0.605” and IC (improved cylinder) 4-slots 0.611”.

As primarily a rifle hunter I can see the advantage of a gun that gives you the option of fur and feather in a single design. However, I can also see the ability to be able to use solid slug too, as it really makes the Sever even more versatile. For a keeper checking traps etc. this looks like a great gun, likewise for the short range pot hunter it will give mastery of rabbits and pigeons etc.

Quite the most awkward choice on the Sever is sights. The irons are basic but they work, though probably limit the working range to about 40 yards with 22 LR, so a scope is near mandatory. However, glass is hardly the thing for shotgunning, so what do you do? One option is a red dot, which though not magnifying the quarry gives a decent aiming point. Here you zero the rifle barrel and then pattern the shotgun tube to see what sort of aiming point the dot gives.

Workable, but it does not solve the problem of longer shots with the 22. One possible solution is a low magnification, driven game scope and such an optic is the Luger 1.5-4.5x20. With its illuminated, dot/circle reticule with lead arms it gives a working optic for rifle use and at a pinch can be wound down to 1.5x which will allow you to use the shotgun too. This is what I fitted.

At 50 yards the rifle barrel was printing around ¾” which I thought acceptable for the general build and scope used. This could be pushed out to 75 yards if required. I’m no shotgunner but the Sever patterned well at 25 yards and out of interest I tried a few rounds of rifled slug through it too. With the Improved Cylinder choke fitted it shot well. As can be seen, this is a handy and versatile tool for many shooting occasions; personally I would go for the 223 Rem/20-bore set up, which seems to be the most practical choice.

Well built, tough and reliable, if there is a down side to these two guns it’s their lack of capacity and totally manual operation. Fiddling with a 22 LR or 308 cartridge in a break-action gun might not be your idea of fun. Likewise the lack of a second shotgun barrel means you had better be good. However, they are what they are and if you can see the advantages they offer, which they do, then they will not break the bank either.

We Say:
Built to last
Basic yet Practical
Worth consideration