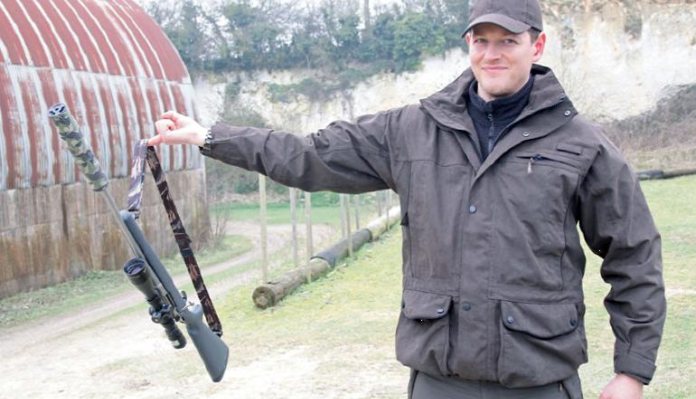 Weight and size are big considerations for hunting rifles; as your average gun tips the scale at between 6 and 8lbs bare-backed, with scope, mounts and moddy probably adding 2-3lbs on top. Fine for high seat work or a quick stroll around the woods but, believe me, when you carry it a long distance up and down hills, every ounce counts!

So, what’s this got to do with Barrett, who gained their rep with big bore, sniping rifles and have traded on it ever since? Their latest model, the Fieldcraft is a total departure from their normal line-up, plus, it’s aimed exclusively at the hunting market.

On opening the box, I had not seen such a compact rifle for many years. Feed is from a blind, box magazine, which does away with a hinged magazine floor plate, so everything goes in and out of the top. Bit of a pain on the unload, but if you are trying to save weight; then a good place to start!

On that point, everything is slimmed down, with the receiver showing angled sides with a rounded top, the width is 1.25”, which is slimmer than a Remy 700s at 1.38”. Likewise, the fluted bolt, its body diameter is just 0.584”, by comparison a Mauser M12’s is 0.810”. It locks by twin lugs and shows a Sako-style extractor claw and a spring plunger ejector. The handle too is long and slim and there’s a faceted shroud at the rear and the barrel tappers quickly from the re-enforce to a muzzle O/D of 0.561”, where it’s cut for ½ x 20 UNF. All the metal is stainless in a matte finish, the trigger guard too; thought they might have substituted polymer? Without anything on board, it weighs a mere 5.2 lbs; now, that’s light and without recourse to a carbon fibre-wrapped barrel! The fat boy of the range is the 25-06 at 5.75 lbs!

The stock is a real piece of work; its 26oz of hand-laid carbon fibre with recoil pad and sling studs; length of pull is a generous 14”. Inspection shows the comb is subtly angled up towards the recoil pad with a substantial cheek piece; so, as the gun fires, the angle moves away from you to stop you getting smacked. The pistol grip shows a medium angle and offers a good hand/finger position. The forend is deep and long, so should suit most people. The blind box magazine has a steel liner and gives 100% feed.

However, the most unusual aspect of this build is that the barrel is not free-floated and it and the action are full-length bedded from tang to forend tip with pillars as standard. This is done to stop that slim tube moving when it gets hot. It’s a similar principle to pressure bedding; here, the front of the channel in the forend was configured to put upwards pressure on the barrel, or pre-load it if you will!

If you buy this rifle, I’d recommend reading the hand book, as Barrett are very specific about action screw pressures. They say the front should be 80 inch/lbs and the rear 36, I have read elsewhere that experimentation with these settings can have a significant effect on accuracy, both good and bad. As I do not have a torque wrench, I decided to leave well enough alone!

Controls are all very normal here, there’s a 2-position safety rear/right of the action; like a Remy 700; forward to FIRE and rearwards for SAFE with bolt operation. At the rear of the shroud, is a cocked action indicator pin that can bee seen and felt, on the opposite side is the bolt removal catch. Barrett have not stinted on the ‘go switch’, with a Timney trigger in place! The break from the wide and curved blade was a pleasing 2.5-3 lbs, with no trace of hesitation or creep; put your finger on it with confidence, feel the weight then pop, it’s gone! It’s also user-adjustable, let’s face it this sort of mech inspires confidence!

I teamed the Fieldcraft up with a Bushnell Elite 6500 2.5-16 x 50 in Talley mounts and a Hardy Gen IV moddy. In real life, I would fit a smaller and more practical hunting optic, something like a 2-10x42. But the x16 mag would allow me to see how it could shoot off the bench. On mounting the scope, I noticed that the forward receiver bridge has three holes in it, so it’s possible to push it as far forward as possible. Being a long-armed shooter, all my glass is set in this position.

I must admit, I did not really warm to the gun at first, thinking it too light, simple and for that matter expensive, at well over £2K. However, researching the article I was soon appreciating what Barrett has achieved, as to a greater degree they have made a production version of a Melvin Forbes design from the 1980s at considerably less cost. His New Ultra Light Arms company was the first to offer such a concept, with some revolutionary materials and ideas.

Barrett has kept calibre choice sensible and surprisingly generous. You get both long and short action options, along with two barrel lengths (short action) at 18 and 21” and only one in long at a pleasing 24”. Nice to see a company who realise rounds like the 30-06 etc do better with longer tubes and have also resisted the urge to offer Magnums!

My tester was in 6.5 Creedmoor and at the time Edgar Brothers did not have any factory ammo, due to the high demand in the US and as you read this hopefully their back ordered stock should be in. Being a Creedmoor owner, I found some Hornady 120-grain A-MAX, but Edgars kindly supplied me with Hornady cases and 129 and 140-grain Interlok bullets, so that I could reload. Grudgingly, I donated some of my prized 143-grain ELD X bullets, which are probably the best 6.5 hunting pills I have ever used! The provide superb accuracy and energy retention.

Even fully rigged, the Fieldcraft weighed 8.2 lbs and it feels lovely in the hands and like a feather on the shoulder. I suspected it might be a bit lively though; we shall see! Accuracy testing was not as clear cut as I had expected and marred by the fact someone at my range had killed the chrono (not me this time) so I could not ascertain velocity! But I feel that 21” tube will rob a bit of speed apart from the 308 version.

Starting off with the 120 A-MAX it was shooting just over the ½”, pretty good. Reloading data was taken from Hornady’s 10th manual and I used Ramshot Big Game powder for all, which was one of the options. The 129-grain used 41.8-grains and produced an L-shaped 2” group. The 140/41.4-grains was about the same, as was the ELD X 143/41.4-grains, this one shoots bug-hole groups in my 6.5 Swedish Mauser M03. I cleaned the barrel and things improved, the 120s stayed around the ½” and the 140s dropped to ½” and the ELD X came in at under the inch. However, the 129s only shrunk to 1.5”. Charge weight and COL were from the book, but like most rifles you need to find out what it likes! But the three loads that worked, you could say were shooting an average .75”, which is not too shabby!

Recoil was good even with the 140/143 pills, my heavier Creedmoor custom in its GRS stock kicks a deal more even with my 123-grain reloads, proving that Barrett got the butt geometry right. One thing I did notice was that ejection was not exactly positive and it seemed the spring/plunger lacked power. I’m left in several minds about the Fieldcraft; it’s lovely and light and handy and in the right calibre is comfortable, however, not sure I’d want one in 270/308 Win or 30-06! General accuracy at .75” average was good enough, though I’m a little confused as to why it did not like the 129-grainers, when it shot well with the 120s and 140s.