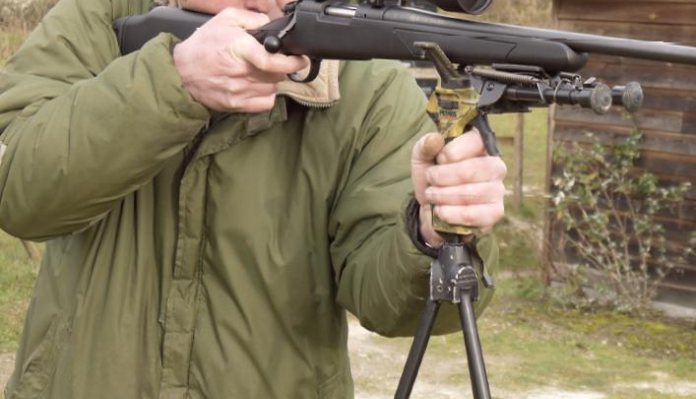 Bergara of Spain’s rep in the UK started a few years ago with barrels, which has now gone on to become one of the top choices for gunsmiths, offering as they do cost-effective and accurate tubes. These are distributed to the trade by Fox Firearms. However, Bergara also offer a range of rifles that is handled by RUAG AmmoTec U.K Ltd. Their most radical product was the switch barrel BX11 Multi-Calibre, which testing showed to be an accurate design. However, not everyone wants this sort of system, with the majority of Brits preferring a standard, fixed-barrel build; something that was missing from their portfolio. This changed in 2015 as at the British Shooting Show I was shown their latest B14 and I liked what I saw! Remy-niscent!

The B14 puts me in mind of a Remington 700, which I suppose it is, as that’s what it takes its general cues from. However, from the box I do not remember any modern Remy being so well-executed or presented and there are a few subtle styling changes and what I consider improvements incorporated! My first ever UK hunting rifle was a semi-custom 700 (Riflecraft Light Sporting Rifle) and I loved it, but over the years I have very much cooled off from the brand, as I had two more that showed serious accuracy/consistency problems. The B14 is in fact a series of rifles offering three stock options: walnut (Timber), synthetic (Sporter) and green synthetic (Hunter) stocks in a number of action/barrel lengths and calibres, with options on threading too. The Timber and Sporter show a right-hand, Monte Carlo design, whereas the Hunter is ambidextrous without the raised comb of the other two.

My tester was the Sporter with a black polypropylene and fibreglass furniture with Bergara’s Crush Zone® recoil pad in 243 Win Short Action. This shows a light/medium, 22-inch barrel, threaded 14x1mm in a pleasing, flat black/grey finish, as is the receiver. This is the same for the other two options in this group; 6.5 Creedmoor (no thread) and a 308 (14x1).

The Timber and Sporter stock layout is near-identical in design, with a medium-height comb and slim cheekpiece. The Hunter does not have a raised comb though. The pistol grip section shows a comfortable angle, with a rectangular section, medium build, tapered forend. Length of pull is 14.25-inches, which will suit most shooters. The Timber is checkered for grip, as is the Hunter, whereas the Sporter has moulded-in, textured panels, either option offering a comfortable and secure hold. QD sling studs are fitted fore and aft and the barrel is fully floated. You also get the choice of bare backed or iron sights.

My tester came with the familiar top-loading, hinged-floor plate magazine system, with a capacity of 4+1 (on any 308-type case head) and 3+1 on the 9.3 and the magnums. Very soon all B14s will come with a detachable box magazine, which I prefer, speaking to Phil Unwin (MD) of RUAG UK, I found out that if you buy a rifle now they will send you the box mag conversion FOC. This is easy to fit, as just two screws are removed to swap the floor plate with the box mag bottom metal. Though if you prefer the simplicity of a top-loader then you can opt for that on purchase too. Just to note prices quoted are for the box mag gun and on average are around £20 more than the top-loader; a small price to pay for a more efficient feed system.

Pulling the action from the stock shows a good and rigid build, with a full recoil pocket and commensurate lug at the front of the receiver. Something I have not seen before is a pressed steel plate that sits between the lug and front of the magazine box; I assume it’s a spacer or stabiliser? The trigger is adjustable and appears to be a pure Remy 700 clone (old-style), it’s factory set at 1.4 kg, which is smooth and broke crisply. so no complaints and no need to fiddle with it either!

The bolt shows a twin lug lock up, with plunger ejector and separate extractor claw, as opposed to the 700 system. The body is solid and the handle is long and slightly angled back with a plastic bolt knob, which promotes smooth operation. The rear shows an aluminium shroud with a visual (red tab) and physical (tag protrudes) cocked action indicator. The safety is a 2-position, forward FIRE and rear SAFE rolling lever, rear right of the action, which does not lock the bolt, so good for safer unloading! Nice is the large bolt release catch (rear left) which is easily operated. The top of the receiver is configured for Remy 700 bases and the B14 will accept pretty much any other accessories for the 700 too. Overall smart thinking!

Fit, feel and presentation are excellent; this is no radical or exotic design, but a very standard recipe and example of how a hunting rifle should be built! I like the fact the barrel is just a tad heavier than normal, which offers more stability without being too heavy. Equally, bolt operation is smooth and slick and it seems to glide effortlessly in the action and the safety is well positioned and will not break your firing handgrip to any real degree.

Along with the B14, RUAG supplied a Kahles Helia CSX scope with Automatic Light illumination, always a pleasure to put some good glass on any gun and Kahles is always well up to the task. A little surprise was the Hausken JD224 reflex moderator or lyddemper as the Norwegians call them, which is new. A final item was GECO 76-grain Express ballistic tip with a small hollow point, not bad fodder for we British, as it addresses the need for speed with a bullet good for both fox and deer.

The Hausken shows a slightly different approach to fitting. Unlike all other cans I have used (and there have been a few!) this moddy is not thread-specific to the rifle. Instead a top hat adaptor cut internally for the individual muzzle thread engages with the larger standard thread inside the moderator. Clever in some ways, as for example you could get the 243 version and use it on say a 223, that might have a slimmer thread like ½ x 28 UNEF or similar. In use, the moddy worked well and was light, so not affecting balance significantly!

Being a 243, I reckon that to easily achieve large deer legal energy levels of 1700ft/lbs +, a 22-inch tube is just about entry level, as this calibre is very velocity sensitive in shorter barrels; especially with lighter bullets. The 76-grain Express was shooting ¾-inch groups at 100-metres, so well up for most work, over the chrono it gave an average 3250fps/1780ft/lbs.

The forend was a tad flexible but rigid enough not to interfere with the barrel, even when shot off a bipod, so I don’t see any big issues on change of point of impact from various shooting positions or supports! Overall a very pleasing rifle and exceptionally well priced for what you are getting, with the Sporter giving change from £700.