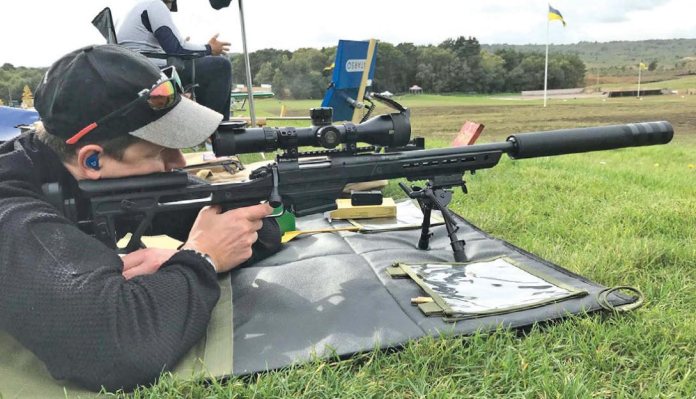 You may have recently read Peter Moore’s review of the Bergara B14 Hunting Match Rifle (HMR) variant, which I must say impressed us both with its dual role ethos, build quality, fantastic stock, accuracy and especially price! However, it wasn’t until I got my hands on the BMP (Bergara Match Precision) that an instant decision was made. I must have this rifle! I did not need to fire it to know it was going to be a real performer. There also happened to be a print out of its test target from the factory in the box, showing a very healthy 3-shot group with a diameter of just 7.3mm at 100 yards!

Bergara made the smart move a few years ago and based their action and its footprint on the tried and tested and best-selling rifle of all time, the Remington 700. This decision allows the user to make the most of all the aftermarket parts; triggers, stocks, rails, magazine conversions etc. They have however, made some tweaks and improvements to the design and of course incorporated their own high quality, buttonrifled barrels. The B14 range features several models - Sporter, Sporter Varmint and Hunter, HMR and of course the BMP, same action, just different stock material and barrel options.

Now, it is immediately obvious from the furniture that the HMR and BMP take a few steps up from the rest of the series with regards to performance. As mentioned in Pete’s article, the HMR is designed to be dual-role rifle, hunting and range use. The BMP however is primarily intended for range work, which is evidenced by its chassis system and the weight that comes with it! It is clearly aimed at the ever-growing audience that is the precision rifle community and takes the fight to the Ruger Precision rifle, Sabatti STR, Tikka T3x Tac A1 and the Savage BA Stealth.

I always find that a good chassis system really increases your confidence in a rifle’s capabilities and more importantly means you can be certain when purchasing one. This is because it removes the variables that may sit in the back of your mind such as how well the barrel is floated and the action bedded? The BMP’s chassis is manufactured from aeronautic 7075 aluminium, to a very high quality and is constructed of three sections (butt, main housing and forend) secured solidly in place by Allen screws.

Starting from the back, it incorporates three adjustment systems. A heightadjustable cheek piece from 0 to 1.5” and set via a thumb screw; simply undo it and pull the cheek piece up to the desired height then tighten it. It is at this point that I quickly learned of one minor but annoying feature, you must remove it each time to take out the bolt, however I was pleased to discover that one of the guide rods incorporates small grooves along its length and a circlip can be used to remember your chosen height. The length of pull (LOP) can be adjusted from 13 to around 15” via another thumb screw, so no tools needed! The height and angle of the butt pad can then be set to your requirements by a hand wheel. Being 6ft 6”, all of this is critical to me, as I need the extra LOP and because I like to be as low as possible when in the prone position, this height-adjustable butt pad is a godsend!

Moving to the centre of the chassis, we find an AR15-style pistol grip, the one which comes with the rifle is pretty good, filling my hand reasonably well, while also allowing for a repeatable trigger finger position. However, if you don’t like it, then it can be swapped out with one of the many aftermarket offerings, such as an ERGO or Magpul. Still in the centre, everyone will be pleased to see a 5-round, AICS pattern magazine included with the rifle and kept in position via an ambidextrous mag catch at the front of the trigger guard. If you find yourself wanting a spare or 10-round model, they are readily available from Magpul. Rifles like the Tikka T3x Tac A1 have dedicated magazines, which happen to be very expensive, so a good move from Bergara!

Moving forward, there is a rigid U-shaped forend, which offers up some substantial space for the barrel to float in. It features a sling stud in the appropriate 9 O’clock position, as well as socket-type, QD swivel attachment points on both sides. It is also M-Lok compatible, offering slots at the 3, 6 and 9 O’clock for the attachment of Picatinny rails and various other items as well as threaded holes to accommodate a night vision hood if required.

As mentioned before, the action has the DNA of a Remington 700, the bolt shows a twin-lug, coned design with a spring/plunger ejector for ultimate reliability. At the rear is a cocked action indicator, operation shows a well-proportioned tactical bolt handle. The trigger is of Bergara’s own design and is a pleasure to use; the blade is curved and comfortable. Pull is adjustable and set at 3.7lbs from the factory, with an adjustment range of between 2.8 – 4.4lbs. The safety is a 2-position rolling lever positioned rear-right of the receiver, forward to FIRE and rearward for SAFE (with bolt operation). All of this, combined with the single stack polymer magazine, means that the BMP offers smooth and reliable operation!

Not included is a scope rail and unsurprisingly the BMP accepts all that fit a Remington 700 action, so plenty to choose from! I opted for a Barton Works 20 MOA one-piece model, married to a pair of Tier One, medium height rings, with one of their anti-cant bubbles; every little helps for the long-range stuff!

By choosing 6.5 Creedmoor, I was joining one of the fastest growing trends in our sport, especially in the USA. So, for me this was a test of both calibre and rifle and neither disappointed! Due to the lack of available factory ammunition, I loaded up with some new Lapua brass with Hodgdon H4350 a 123-grain Lapua Scenar match bullets. After running the barrel in, and working my way through my new loads, it was not long before a wide grin appeared on my face, as I stared at three consecutive 5-shot groups measuring under 0.250”, the smallest just 0.238”! Not only did I discover the accuracy potential of the BMP but also this fantastic cartridge too. Not too loud, and with low recoil; but the question remained, how would it do at long range?

Bisley would be the testing ground, with the intention of pushing the Bergara out to 600 yards on Century range, whilst pitting it against a Tikka T3 TAC in .308. Myself and a friend would start at 200 then move to 300 and then 600. It quickly became apparent however that these distances were no challenge, with the first 3-shots at each distance landing in the V-bull! So, after some quick thinking, we booked the new electronic target facility on Stickledown range at the somewhat more challenging distance of 1000 yards. With just 20 rounds left, and after getting dialled in, it was not long before I was achieving regular V-bulls at this extreme distance; the grin returned!

With a well-made action and a barrel from a world-renowned manufacturer, chambered in a great calibre, the accuracy that I achieved during load development and at Bisley seemed pre-ordained, almost obvious! Though that didn’t stop it surprising me, reading about it and taking an educated guess to a rifle’s performance is no substitute for experiencing it yourself! It also became apparent during testing that this particular chassis system is without a doubt the most comfortable I have ever used, which goes a long way to helping the barrelled action in achieving such excellent accuracy.

To put this in perspective, I purchased a £1500 factory rifle, got it out of the box, went to the range that weekend and spent an afternoon developing a load, then the following week I was repeatedly putting rounds into a 5” circle at 1000 yards; what more can you ask for? Just wish I didn’t have to remove the cheek piece to get the bolt out!