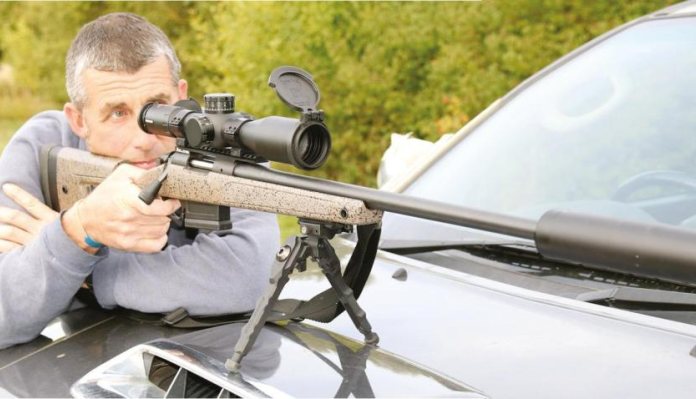 Since their introduction into the UK, Bergara’s bolt-action rifles have caused quite a stir. Copying the successful Remy 700 platform with some subtle tweaks turned it into something special. Equally, keeping the action footprint and trigger mechanism means nearly all 700 accessories and after-market components are compatible.

In late 2017, I was sent two of the newer B14 models, the Hunter Marksman Rifle (HMR) and the Bergara Match Precision (BMP). The HMR was a 20” with a medium barrel in 308 Win and it had potential, the BMP was in 6.5 Creedmoor and though a bit heavy for my liking, proved it could shoot. Although I already have a Creedmoor semi-custom for longer range precision/ varmints, it has a shorter 22” barrel and a 1-8.5” twist rate, which does not support bullets heavier than 130-grain, which was not ideal, so it will be going.

You may disagree, but I like longer barrels, as if I want to reach out I feel the extra tube will offer more benefits. To illustrate this, Hornady’s 129-grain SST Superformance load from a 22” Remy 700 heavy barrel gives an average of 2871.5 fps/2372 ft/lbs and from the 24” BMP 3010 fps/2606 ft/lbs. Giving an extra 138.5 fps and a whopping energy increase of 234 ft/lbs; so, when I saw that the HMR came in a 24” heavy barrel version in 6.5 Creedmoor, I was very interested. Combine this with its decent, Remy 700-type action, 5-round AI-type box mag and simple adjustable stock, I was seriously considering it.

The HMR is what I would term as a VT (varmint target), mating a standard action with a medium/heavy barrel and heavier stock that can be used for target work and double as a hunting or varmint gun given the calibre. I doubted if I would be punching paper at Bisley, but ringing steel at distance is fun and challenging; plus, for varmints with light bullets and longer range hunting with slippery, high BC, VLD-type bullets would be an enjoyable technical exercise.

The 24” barrel has a muzzle diameter of 21.2mm and is threaded 18x1mm with a protector and the required 1-8” twist rate for 140-grain+ bullets. It’s a big lump of metal, but I didn’t intend it to be a walk and stalk tool, but a more stand-off piece, where weight and handling is less of an issue.

I prefer the HMR with its quality moulded stock, with what Bergara calls a ‘mini chassis’, which is an integral, aluminium bedding block that the barrelled action bolts to that extends into the forend. The action void is precisely finished and, pleasingly, the B14 action uses a fixed (Remy 700-style) recoil lug. I was surprised it was not also synthetically bedded, which is something I would do as a matter of course! The stock is an excellent compromise between the HMR’s stated abilities and good looking too! The colour is brown with a black, splatter pattern over the top that also gives a deal of grip. There are also cast-in textured panels in the usual places. The butt is under-cut to form a rear grasping hook, which is excellent for prone shooting and the pistol grip is near vertical and fills the hand nicely. It also offers a good trigger finger position.

A height-adjustable comb is controlled by a thumb screw on the right side and length of pull (LOP) is by three, removable spacers and a thick recoil pad. Maximum LOP is 14.5”, so more than enough! The forend is medium width, seriously rigid and free-floats the barrel all the way to where it exits the receiver. The tube sits dead centre in the channel, with no metal touching anything. Three QD sling studs are fitted; one under the butt and two up front, plus four, flush cup/sockets for QD swivels (two either side) at front of forend and rear of butt. Overall, a very nice piece of shootable furniture!

The action is a copy of the Remy 700 with a twin lug, coned bolt that uses a Sako-style extractor and spring/plunger ejector. The bolt lever is extended with a large handle, offering some slick manipulation! The trigger mech looks very 700 too and although set for a quoted 3 lbs is adjustable, much like a Remy is. The blade is mid-width and well curved and comfortable on the finger. The safety is a 2-position rolling lever, rear right of the receiver and pushes forward to FIRE and reverse for SAFE. With the safety on, bolt operation is still possible, and its position means little disturbance to the firing hand.

Had to get one

The overall feel of the HMR was most pleasing and to say it feels just right would be an understatement! It’s one of those rifles that you wish you had, and soon after I added it to my armoury. I fitted it up with a Minox ZP5 tactical scope in Sportsmatch 34mm low rings, a Haukson 6.5mm Reflex moderator and an Accu-Tac, BR-4 QD bipod. It’s quite a departure from my usual choice of a Harris BRS, but given the roles I had elected for it, I wanted as much stability as possible, which the BR-4 gives in spades. To maximise this, I fitted their Picatinny Rail Mount.

Like any new rifle, there’s a period of running in and getting to know it and the HMR was no exception. The standard trigger felt pretty good, so I ran with that for a bit, but and even when adjusted for a lighter release, I still felt a bit of hesitation. Sweet enough on a hunting rifle, but with a longer ranger like this you have more time to think about the break and realise it’s not ideal. I think I’m going to end up getting an adjustable with a wider blade soon.

One thing that did surprise me was the ejection stroke, which for a spring/plunger system like this, lacked power. Normally, on this sort of system, the empties come powering out, no matter how fast or slow you work the bolt, but not on the HMR. However, a re-think of my technique with a more positive and consistent movement solved it to a greater degree. But, as I said, it’s early days yet and there’s a lot of experimentation and load development to do.

I’m looking to produce two or three loads; one a lighter, flat-shooting varminttype, probably a Hornady 95-grain V-MAX or Sierra 107-grain TMK. Then, something around 129/130-grains and for longer distances Hornady’s 143-grain ELD-X. This one shoots like a demon in my 6.5 Swedish Mauser M03 and I have high hopes as it appears to combine the better performance of a match bullet with its higher BC of G1- 0.625/G3 – 0.315 with what is a hunting-legal ballistic tip design; so, the best of both worlds. I had heard was the B14s have a longer chamber throat, which could have issues with cartridge overall length (COL). The maximum COL measured using the 143 ELD-X was 2.925”, which would probably need backing off a little. However, maximum magazine COL is 2.886”, Hornady quotes a figure of 2.800”, so plenty of room for experimentation and fine-tuning. I did an initial barrel break-in of 30-rounds on a shoot one/clean one basis, then shot for group/speed with Norma’s 130-grain Match ammo, which I’d used before. Shooting sub-1/2” groups, velocity was an impressive 2933 fps/2492 ft/lbs; OK, I’d not used this on live game, but it gives a good idea of what a reload can do. So far, I’m impressed with the rifle; it looks good, feels good and has some serious potential!