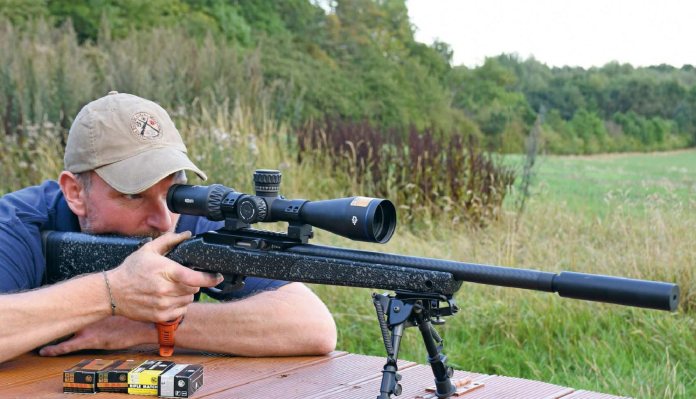 I think it’s fair to say that in the semi-automatic .22 rimfire world, a Ruger 10-22 is a rite of passage. For better or worse, these guns were functional, reliable and easily modified, with the latter factor being very important for ultimate performance and improved accuracy. Bergara has now produced a similar gun called the BXR, which is available with a plain steel barrel as well as a carbonwrapped, tensioned barrel (on test).

A ½”x28 thread tips the fully freefloated barrel with a neat, recessed crown to ensure a clean bullet exit. A threaded cap is supplied in blued steel to match the muzzle and breech surfaces of the barrel, where it emerges at the limits of the carbon fibre jacket, which is 21mm in diameter and parallel along its entire 16” length. I fitted a DPT moderator on this lightweight rifle, which tips the scales at just 2.3kg/5.1lbs without accessories.

The polymer stock shows a matte, speckled finish in black/grey. For an effective grippy surface, there is some tactile stippling inlaid along the forend walls and grip to assure comfort and security. The forend is square in profile, with plenty of space to hold on to without your fingers or thumbs detrimentally contacting the barrel.

QD sling anchor points are recessed on the left and right sides as well as a conventional stud underneath for a bipod. These are all securely anchored in the stock, with no fear of breakage. Plus, the inside of the stock shows significant triangulation and webbing within the injection moulding to assure stiffness and durability. If you aren’t a bipod fan and appreciate using a rest bag, the underside is flat to ensure stability without rocking side to side.

Blued steel emerges from the carbon fibre as the barrel reaches the action, and upon further inspection, shows more secure anchorage into the receiver than a 10-22.

A 30 MOA Picatinny rail is machined as part of the receiver and this has been well specified to hang forward over the barrel, providing plenty of mounting space for larger scopes.

The cocking handle on the right side of the receiver has recesses to aid fingertip grip, and when manually operating the action straight from the box, the cyclical nature of the bolt’s motion was smooth, without any perception of undue friction.

On a blowback action like this, the physical recoil of the cartridge brass itself is what forces the sprung bolt backwards. Next, it hits its stop before springing forward, after re-cocking the trigger, to strip a fresh round from the magazine and chamber it. Bergara has used a white polymer bolt stop, rather than steel (always a popular modification), to buffer the metal-on-metal slap experienced on Ruger rifles. This helps to mitigate undesirable mechanical noise.

The bolt shows right side extractor, ejector operation and for the record, I shot over 500 rounds through this gun over three days and it only misfed once, and this only happened because of a round I had not quite pressed fully into the magazine. I was impressed, although this is partly down to clean-burning, appropriately lubricated RWS ammunition!

Bergara has wisely chosen to use a magazine system that’s 100% compatible with Ruger’s 10-22. The one supplied as standard is a similar 10-round rotary magazine that can be dismantled for cleaning if required. If kept clean, this is a reliable, fast-operating magazine with a compact layout. Plus, 15 and 25-round Ruger or other aftermarket magazines are easily purchased and fully compatible. An ambidextrous mag release sits to the front of the trigger guard and the underside of the rifle is recessed to allow a fingertip to grasp the empty mag.

Bergara advertises a 3.5lb trigger on the rifle, but to my delight, this was not the case on mine. This one had the tactile feel of a 2-stage unit, with the smallest first stage take up and then a reasonably crisp second stage that broke at 680 grams. This significantly aided shot timing when I was trying to shoot steel targets swinging from previous bullet impacts. There is a cross-bolt safety above the trigger - right for SAFE, left for FIRE.

The full pistol grip shows almost vertical geometry and is a fantastic version of the company’s B14 HMR unit that I have always liked, mainly because it is itself pretty much a Macmillan A3/5 layout. The comb is tall, slim and well aligned for good scope address, and although the stock is short (13.5” length of pull), it’s certainly appropriate for a fast action rimfire.

The stock is compatible with Bergara’s spacer system and three are supplied, adding approximately 10mm each to the LOP. Also, there is nothing to stop you removing them for small shooters or adding them for taller shooters. The recoil pad is medium/firm, without any soft spots. There are two fitting screws that also pin the spacers in place. To this day, I still think this is one of the best stocks on the market.

Finally, the underside of the butt shows a hand stop and bag rider for adaptable support. There is another (removable) sling stud and two more QD sockets - one on either side for easy sling carriage flat to your back. Well done, Bergara.

I love shooting .22 rimfire, it’s such a low cost, low noise joy, yet still has all the challenges of good technique and ballistic calculations as different distances are engaged. I had four types of RWS ammunition to investigate.

Subsonic hollow point ammunition showed the largest group size, yet with 10 rounds at 50m, not totally unrealistic for hunting ammunition designed for expansion on quarry, rather than ballistic purity and ultimate target punching capability. Switching to RWS Match was a slight improvement, mostly with extreme bullet speed spread and noticeably less vertical dispersion than the hollow points that were over 100 fps slower. RWS hollow points have always been one of the slowest in my experience and very definitely subsonic, plus one of the quietest.

Moving to more focussed target ammunition, R50 showed superb performance, with a single clump of a group spanning just 10mm centre-tocentre and an extreme spread of less than 10 fps. R100 was very definitely supersonic, well over 1100 fps and would have shot the smallest group at 8.5mm, but for a single flyer that may well have been me. The simple fact is the gun shoots really well!

As well as from the bipod on a bench, I took some prone shots and enjoyed shooting from a tripod with the gun clamped in, as well as bag rests on barricades. I really enjoyed shooting the rifle extensively on a fine day with a light breeze at steel gongs up all over the harvested field. I think the greatest compliment I can give the rifle is that it was reliable and fun.

The 30 MOA rail makes scope mounting easy and there is plentiful space for correct eye relief, even with big scopes. The action is retained in the stock with a single screw ahead of the magazine and when tensioned, sits firmly in the inlet with a flat base to ensure consistency without stress applied. This and the barrel’s stiffness, even with such light weight and free float, are all part of that versatile consistency.

This is a thoroughly good rifle with a snappy and fast semi-auto action. Plus, it’s reliable with the notably clean burning RWS ammunition types. The stock is a perfect partner to a more tactical, precision rimfire and other than having to collect a lot of brass from the floor, I didn’t miss bolt-action precision. On the contrary, I enjoyed fastfire precision like never before.

The steel barrel is tensioned within the stiff, thermally insulating carbon fibre, but heat never appeared to create any problems, although it takes serious work to get a rimfire problematically hot. Hats off to Bergara, you have impressed even ‘Picky Parkin.

In 500 rounds, I only cleaned the rifle once, because it had to go back in its box all sparkly to RUAG. The barrel cleaned easily and more so, it was noticeable how little debris was left on the breech face and around the aluminium feed lips on the magazine, often the Achilles heel of semi-auto rimfire reliability. The bolt shows a gold coating that avoided sticky lubricants, improving cycling efficiency without full disassembly, and although slightly noisier than a bolt action, the light weight makes this a very attractive hunting rifle.