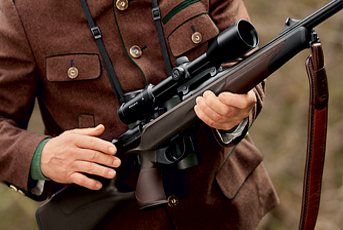 My views on Blaser’s R93 straight-pull rifle/switch-barrel are simple – an unusual but practical action, potentially accurate but I don’t like the magazine system as it can only load/unload from the top. Would I buy one; doubtful, especially as by that time I had invested into what I considered a better design the Mauser M03. Again my thoughts on this one are on record! Given the unconventional nature of the R93 system I have always found it odd that it’s so popular in the UK over a wide range of shooters, who in the main are quite conservative in their choice of equipment!

In 2008 Blaser added the R8 to the mix, which for me solved the major problem as it had a detachable magazine system. It was a little unusual in that it incorporated the trigger guard and blade in the design, a feature that caused some controversy. Along with its green synthetic (Professional) stock the design was getting interesting, but I still considered my M03 the better gun.

Next came the R8 Professional Success, which was another quantum leap forward in terms of the design. Mechanically identical the big change was its thumbhole furniture, which Blaser invested a lot of money and R&D into to produce one of the best, multi-positional handles I have ever used. I considered this the game changer in terms of a practical hunting rifle stock, especially as it had a synthetic build with rubber griping inserts!

The high/straight comb, generous thumbhole aperture and ergonomic pistol grip made it probably the most shootable rifle I had ever used. Always wanting a Blaser, but up until this time never being totally happy with what was on offer I was seriously considering the R8 Professional Success. But did I really need one; no, but since when has that been a factor as I think most shooters will agree?

However, I fought the urge as my M03 and the rest of my diverse arsenal where more than up to any tasks I asked of them. But an epiphany occurred in 2012 on a chamois hunt in the Austrian Tyrol with Swarovski, and with all things and my least favourite of the Blaser family the R93. Ironically I could have brought my own rifle but did not, funny how thingsturn out…

I got my chammy and made the shot with my guide Walter’s R93 Professional in 7mm Rem Mag. Nice rifle but no big deal and I did not think any more about it. But the epiphany came and suddenly I realised I wanted an R8 Professional Success just like that! It wasn’t one of those 5 minute fantasies either; you know you see a new toy and want it, then realise you don’t. In my job this happens all the time, but this was different and I knew I wanted one!

With the hardware selected the next important choice was calibre. I had most already from the bread & butter 223 Rem and 308 Win etc. up to the more exotic like my 6.5 Grendel and 8.5x63 REB. Some time ago I wrote a series on what might or might not be the ultimate calibre, an interesting exercise that really did not prove anything I did not already know. However, it proved useful in my choice and sent me in a direction I had not really considered.

What I wanted was something hard-hitting, flat-shooting and flexible in terms of bullet weight and species, and found this in the 270 Winchester. Yes I know it has a supposed bad reputation – too small for big deer and too big for small ones some might say! Oh yes also a ‘meat mangler’ according to urban shooting myth, but that as ever is down to bullet choice and type. It has been around a long time with no sign of going away so I reckon it has something going for it!

As a calibre 270 is not new to me as I have owned two 270 WSMs (Winchester Short Magnums), essentially a super 270 Win it’s at its best for bigger game. My gut feeling with the 270 Win with 130/140-grain bullets would be ideal for most needs, but with the possibility of lighter weights for foxing! Hornady for example offer a 110-grain V-MAX.

Despite the fact the R8 is a switch barrel it was not bought for that purpose and I had and do not have any current plans for new calibres/barrels. I got the Professional Success for my own reasons, primarily the thumbhole stock, which is very shootable and secondly it’s lighter and handier than my M03 in any configuration.

It’s not a replacement as the Mauser has proved its worth over the years as a boar gun in 8.5x63 and I would choose no other system as it’s tough and reliable. Equally the moderated, 223 barrel makes an excellent, dedicated small deer, varmint and fox gun. The only thing that is likely to become redundant is the 6.5x55 barrel. Though maybe not as it’s threaded so gives me a fullbore, centrefire suppressed option if required. As I purposely elected not to use a moddy on the R8.

I have only had the R8 Professional Success a few months and am loving it. On top is an old favourite a Swarovski Z6i (Mk 1) 1.7-10x42, which suits the package nicely. I have started reloading for it but currently I’m using factory Winchester 130-grain Ballistic Silver Tip. This is proving excellent on muntjac and roe as the bullet is well constructed and even at high speed is not a meat mangler and delivers serious knock down power. Plus I am confident it will be equally as effective on fallows and red! If I want a bit more I have plans or a 140-grains Barnes TSX handload and have been promised some GECO 150-grain PLUS, which should offer different possibilities.

So any regrets? Yes I would like a slightly longer barrel as at 22” I don’t think it’s realising its full potential; 24” would be better. Cosmetically I chose the green and black stock; on reflection I would have preferred the brown. My daughter who’s into design reckons I should have gone for the version with leather inserts, hmm maybe a bridge too far…

I purposely chose the R8 with iron sights and don’t want the option of a moderator. The idea being a light, totally shootable walk about gun in a versatile calibre that was not solely reliant on optics, which I think has been achieved. I jokingly refer to it as the last sensible rifle I’m likely to buy!