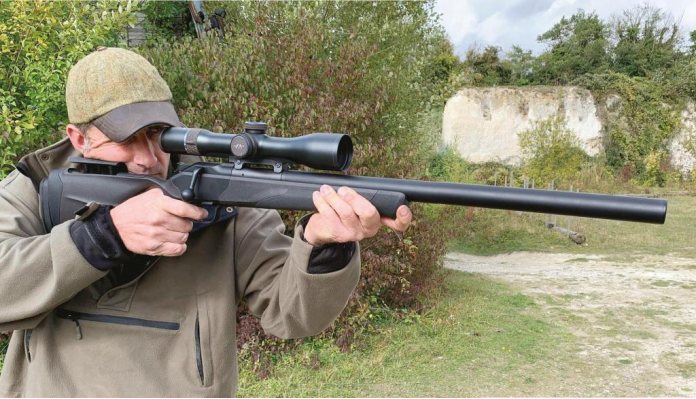 When it comes to getting in new kit to test, I’m like a dog with a bone, I just won’t leave it alone. I guess I must be doing something right, as importers still send me stuff! Something I had been pestering Blaser for earlier this year was their new R8 Silence, their fully moderated hunting rifle and I eventually got a wood stocked version. I own the standard Professional Success model, which I love, and the Silence turned out to be quite some machine too, offering superior accuracy, excellent moderation effect and surprisingly good handling.

Well, a bit later on Blaser launched its new innovations, amongst of which was a series of new stocks, for not only the R8, but also their sweet little, K95 Kipplauf single-shot. Called the Ultimate range, they followed the basic layout of the thumbhole Professional Success model, with some subtle redesigns and four options; two complete stock units; standard fixed and adjustable comb and two butt modules; length of pull (LOP) and recoil absorption.

The standard, Ultimate unit offers a fixed butt and length of pull, with a medium rubber recoil pad and the high, straight comb with cheekpiece on the left of the butt. This is near identical to my R8 Professional Success. However, the Ultimate also allows the fitting of the aforementioned options, so you can mix and match, to a degree. To either stock set you can fit the LOP or recoil modules, it’s down to you to decide what you prefer. However, the adjustable comb is not a retro fit, as it comes with that specific stock option, so must be nominated pre-order.

The two modules just screw in at the rear, replacing the standard, fixed recoil pad unit, this can be done by the end user, so the rifle does not have to go back, which is a result. Furniture is a brown synthetic with either Elastomer (rubber gripping inserts on pistol grip, comb and forend) or with leather, the latter looks really sweet. Plus, two sling studs in the tip of the forend and under the butt, as normal. Although not the subject of this review, the K95 Ultimate Carbon, which I have been promised to test later, comes in the same butt configuration in a carbon fibre finish and leather inserts and the same modules options and, like the rest of the range, looks the dogs!

I already tested the R8 Silence, but did not like the traditional wooden furniture, which seemed at odds with this modern design, so welcomed the Ultimate option. But like I said, with the right ammo and calibre choice, it’s one hell of a rifle. I was sent the stock with adjustable comb and LOP module, which I feel are the two best options; at a later date I hope to test the recoil unit too.

My game plan was to see how the Ultimate compared to my fixed Professional Success unit, as I have always found that stock suited me well. The question being, would I change up to it if I could? However, a friend of mine always found it too short in the LOP and also too low in the comb, so much so, he could not shoot it well. We shall see, but first the rifle!

The concept is not that of a fully suppressed rifle relying on dedicated, sub-sonic ammunition for its lack of signature. Here, there are issues with reduced energy levels and lack of expansion, due to mandatory lower velocities. The Silence uses a short barrel and a highly effective, full-length, slim-line, reflex moderator, but with standard ammunition, so strikes for a halfway position rather successfully, between the two and is still, effectively UK large deer legal and all presented in a reasonably normal package, in terms of length and handling.

Visually and mechanically, the Silence is a standard R8 build, with its straight-pull, 13-collet, radial locking system, detachable magazine and de-cocker, with the ability to swap barrels, bolt heads and magazine inserts and therefore calibres; so, it requires their dedicated QD scope base, which is extra. The action and receiver are matt black with a gold R8 on the former, with the barrel and moddy matt blued. The stock is in two pieces and not one like my Professional Success and sadly the furniture will not swap between models; pity! The forend is naturally wider/deeper, to accommodate the moderator and does not feature the option to fit Blaser’s, spigot Carbon Bipod, which is something that needs to be addressed in my opinion. There’s also a standard/slimmer version for normal barrel profiles too.

The reflex moderator is long and slim at 20 x 1.2” and threads to the M15x1 muzzle and is supported at the rear by a short step that drops down vertically from the end of the reinforce to the compact, 16.5” barrel that’s 0.68” in diameter, with a twist rate of 1-10”. Clearance between the moddy and the barrel channel is minimal, with just a hint of free-float. Being short, the tube is nice and rigid, doubtless aided by the over-sleeved moddy and I found you could shoot it hotter with little appreciable bullet deviation usually found on longer, lighter, unmoderated builds.

Visually, you get the impression of a heavy gun, due to moderator size, which is not so; yes, it’s a bit weightier than a standard R8 at 8.3 lbs (bare-backed) but at 42” (shortest LOP), still quite compact, which is aided by the fact that any R8 is around 2” shorter than a comparable turn-bolt type, due to its action build. Weight is well distributed, with very little muzzle-heavy feel that you might find on a conventional design with a moddy hanging off the end.

Despite its specialist nature, the Silence is a rifle that you can easily ‘walk & stalk’ with. As a comparison, I measured my Professional Success with its fixed 14” LOP and 22.5”/243 Win tube and reflex moddy and it comes to 46”, so 2” longer with that can. Weight-wise, fully bombed up with scope, full magazine and suppressor, the Silence is lighter at 10lb 9oz, compared to my gun at 11lbs 1oz. Regardless of model, the R8 offers a sophisticated and well-engineered rifle made to the highest standards and I’ve yet to find one that does not shoot well or have a decent trigger as standard!

The real news is the butt, which shows both subtle and radical changes. Most noticeable is the removal of material from the underside, however, it’s angled back, so does not offer a decent grasping hook function. The thumbhole aperture is marginally more rectangular in shape and has a more angled palm support that allows the thumb to wrap around a tad more. So, in the standard, fixedlength, 14” version, nothing earth shattering. However, the LOP module increases overall adjustment to 15.5”. For me, it was very much the case of; I did not know what I was missing. It moves in 2.5mm increments, so precise enough to tailor your exact position.

This is controlled by a flush lever on the left that lifts to unlock, and you just pull/ push the pad to suit. The movement is smooth and will easily account for summer and winter clothing differences and most body sizes. Integral, is a height-adjustable recoil pad, controlled by a slotted button, on the left. Movement is generous, offering an inch above and below the heel and toe, which allow near perfect shoulder positions. Useful too, if you are using high mounted optics like night vision. The recoil pad can be angled left or right from the base by undoing the bottom screw (3mm Allen key) and sliding it in the required direction, so, further refining things. For me, an LOP of 14.75” proved ideal with the pad fully down and off set to the right, so a near perfect gun mount! Although these features are about getting a comfortable shooting position, with a bit of trial and error, they will also help to dial out recoil effect, as subtle changes in fit can make huge differences.

The adjustable comb further aids gun fit. I have one on my M03 and it does allow me to tailor my head position depending on the optic I am using. It’s a basic design that uses twin jam screws on the support rods and is bomb-proof. The Ultimate’s is more technical, a spring-loaded, horseshoe shaped section, supported on three pillars, controlled by a 2-position button forward left, that allows you to use the memory function. Here you press it all the way in to make a height setting, then use a short push to put it back down and another to activate the pre-set you first selected; read the manual. It offers 1.5” of total movement; again, more than enough.

In my earlier test, I ran through four different ammo types and it soon became evident that the Silence prefers the heavier weights. Hornady’s 178-grain ELD-X Precision Hunter was the clear winner in terms of accuracy, speed and energy at 2435 fps/2353 ft/lbs/0.5”. GECO’s 170-grain soft tip, though only 8-grains lighter and 57 fps slower came in at 2378 fps/2152 ft/lbs/1.5”.

By comparison, a 22” barrel firing the same load gives 2078 fps/1726 ft/lbs at this distance; more agreed, but it shows the versatility of the 308 Win for most needs. I’m thinking of building some heavier reloads; 180, 200 and maybe 220-grains to see what happens. But it confirms my feelings that if I had a Silence then it would be A – in 308 Win, B – the 18.5” barrel and C – I’d use the Hornady, ELD-X, 178-grain Precision Hunter loading. However, anything that shoots around the inch is going to get the job done, so you have plenty of choice in this weight bracket from 165 to 178-grains.

The rifle came fitted with a Blaser 2.8- 20x50 IC (illumination control) scope, which is proving to be a nice optic. Although looking a bit different, the Silence should be considered more a normal hunting rifle than a specialist design, if you want the ultimate in moderation combined with an effective ballistic output.

Blaser have done a good job with their Ultimate stock system, no doubt, which combined with the Silence offers a most practical and effective moderated rifle!

Sadly, I can’t get one for my Professional Success as explained, which would mean all new furniture. I have no problems with my R8 as it is, but if I could, would opt for the adjustable comb and LOP module, but if I could only have one it would be the latter. The recoil unit uses an absorbent material that compresses under load, which can be selected as to calibre; we shall see!