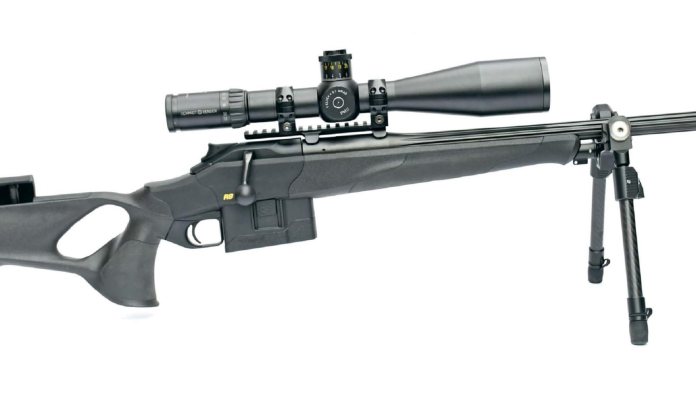 Although Blaser has long been known for their original, R93, with its fast, slick, and versatile straight-pull, multi-calibre action. Some felt its fixed, top-loading-only, 3+1 capacity was missing out, as it did not offer a detachable magazine (DM) system. This all changed in 2008 with the introduction of the new and improved R8 with its 4+1 DM. It was an unusual design that incorporates the lower trigger linkage and guard with the magazine, done to retain the original R93’s ability to offer a shorter action with no sacrifice in barrel length.

Never satisfied, some people still thought the capacity was too small. Blaser has now responded with the Ultimate X, which has a 10-round, detachable, box magazine (five also available) and how have they done this? When theoretically, the trigger and guard were exactly where the mag needed to be? They have effectively added a spacer in the action/chassis mechanics to extend the grip and trigger rearward, behind the magazine.

This can be top-loaded in situ, thanks to the spacious opening above the open breech and sprung magazine feed lips, or just clipped in and out, via its twin catches. Realistically, in terms of handling dynamics, the grip position of the firing hand is placed about 45mm further away from the bolt handle, which was always a literal, flick of the finger, adjacent to the trigger guard. Close proximity like this was one link in a long chain of features that made the rifle feel so homogenous and fast.

The big question is, has this had a detrimental effect on the inherent speed of the R8 system and ergonomic interaction with it? No, is the simple answer. It’s just as fast as before and although perhaps a fraction slower in terms of fingertip access to the bolt, its reciprocating mechanics still leave most rifles in the rear-view mirror.

Addressing the other major differences on the Ultimate X, this is a heavy barrel at 22mm diameter, fully fluted for its 600mm length. It’s threaded 18x1 for a brake or moderator and remains fully free-floating within the detachable forend, which is compatible with various Blaser bipod systems, and stiff enough to support the rifle without intermittent harmonic disturbance!

As before, the action chassis/rails are within the polymer thumbhole, right-handed stock, that offers an adjustable length of pull (LOP) of 30mm and cheekpiece height (37mm vertical) and recoil pad (50mm vertical and angle) for comfort. These are all features of their recent, Ultimate Stock system, which is a beauty in itself. As before the scope attaches directly to the barrel reenforce, with Blaser’s quick detachable (QD) mount, via recesses, in a number of options: QD with rings, or European rail, Picatinny rail that allows the fitting of dedicated rings, NV optics and inclined bases for long range use.

All metallics are colour matched in deep black finish and although heavier than ‘sporting’ versions at 4.14 kg, it retains quite fast handling character and is not unusable in a dynamic situations thanks to centralised mass distribution. The heavy barrel balanced by the adjustable thumbhole stock, even if the moderator, bipod, and heavy precision LR scope, soon bulks up more centrally.

Heavy for a reason

With a light barrel, you would get this muzzle speed back for hunting and I’d like to think people realise that nice as heavy tubes are, they are called that for a reason, with relevant handling compromises. Operation is as before, with a simple, push/pull movement achieving reliable feed and extraction/ ejection, certainly smoother and slicker than some conventional turnbolt systems. Also, this slightly longer layout keeps the bolt shroud farther from your face, which is appreciably pleasant with any big .338 Lapua.

I prefer the polymer stock to laminate versions, having shot both, you get more vibration damping from the Ultimate, also it cuts hollow, clunky harmonic resonance too. The slim comb fits under your cheekbone without lateral jaw displacement for excellent scope alignment, factors which make a physically large rifle feel intuitively deft, unlike some of its hulking competitors. All adjustment works without tools too, a push button for the cheekpiece and levers for the LOP.

iCing on the cake

An iC de-cocker offers illumination control for Blaser optics, although I fitted this rifle with a mechanically versatile, 34mm tubed Schmidt & Bender PMII that seemed to suit its long range precision character. I used the one-piece Picatinny base and Tier One rings for a really secure set up, a Wildcat EVO mod was also added. I set length of pull at 365mm and raised the pad a little above central for my preferred prone shots. The additional Ultimate bipod has long slim carbon legs, pivoting above the barrel for cant stability, which I prefer loading up firmly to take up play and fully stabilise aim in recoil.

This allows superb linear transit of the gun, softening muzzle rise and stabilising field of view to spot fall of shot and aimpoint for follow ups, the gun naturally returned to battery after recoil was transferred to the shooter. I don’t think the X hankers towards the PRS market, as there is no extensive forend accessory rail for balance weights, but it is available in the fast 6.5’s that are so appealing now.

308 seems quite pedestrian these days, but still performs well, easy to feed with ammo and I don’t like zero recoil, especially on a fundamentally heavy gun which feels neutered. It has just enough phut to show its character and whether you may or may not like it in larger calibres. This will be an absolute cracker in 338, maybe not as an all-day range rifle, but one for use in open country, a bit of fire and movement, long range prone, which is what whets my appetite for the R8 Ultimate X!

Performance on target was reliable, with no forend flexibility to interrupt barrel harmonics. Ammo was limited to the three Hornady loadings, with their 178-grain Precision Hunter ELD-X winning the small group prize. From a box fresh rifle that any buyer (I certainly would), would undoubtedly tune far more extensively, probably handload for it too, yet the key initial advertised sub M.O.A. capability is verified. Although the excess luxury of a Blaser is hard to deny, it is a superbly made rifle. The detail and complexity of the bolt’s underside mechanics are a great example of where your money is going, hidden intricacy and design rarely seen elsewhere.

Detail of the integral latch for bolt head swap is just one of these factors to demonstrate the cost, certainly for anyone desiring a multicalibre rifle. Twin, 5mm, captive Allen nuts in the forend facilitate barrel change and there’s a recoil lug in the chassis to mate with the underside of the reenforce. Like the scope mounts, Blasers can be interchanged with reliable return to zero and no inbuilt mechanical bedding stresses harming precision, or day to day accuracy after realistically bumpy handling or in transit. Machining and surface finished throughout are faultless, perhaps characterised by the trigger which breaks with consistent weight and delicacy beyond many custom rifles. With 600 grams on the display screen of my scale, +/- 35 grams every time.

Just when you thought Blaser had everything covered, with the R8, another option is introduced. Will it suit all users, perhaps not? But it’s nice to see them returning to the precision rifle, fold for those wanting a heavy barrelled, super stable, machine that recoils with sublime linear tracking from just a bipod. The butt has enough underside space for a support bag and a stud mounting point for carriage.

Adjustability is often promoted as a quick fix to ergonomic problems on rifles, but it can’t change the external profile of intimate contact surfaces where again, Blaser’s investment into the Ultimate stock system is a huge financial commitment. There is no quick fix, and the addition of adjustability, especially LOP, but particularly recoil pad height and angle, allows far better tactile perception of bipod loading pressure and relaxed aimpoint retention with just shoulder pressure when prone.

Shooting from a tripod with clamped forend, no issues arose of compressing the stock and affecting zero. Blaser’s Picatinny rail is not a QD system as it bolts to the reenforce just using straightforward Allen nuts. It maintains a low railto- barrel distance allowing the rings to control scope height for the corresponding objective lens diameter. There are also no problems if you have irregular scope tube space for rings (items like the illuminator on the S&B take up tube space) and you also have space when something like NV, or a onepiece mount is used that requires full movement back and forth to set eye relief. I doubt any readers will be surprised by my appreciation for the Picatinny rail system.

The final decision is value. Well, if you want a rifle I can’t really find fault with, and there are plenty of expensive makes, I just don’t see the point of! One that is different for creative mechanical concept, excellent ergonomics and manufacturing standards that seem to leave no stone unturned, here you go. Now with five extra shots and fast magazine changes possible, plus no worries about leaving half the trigger mech at home!