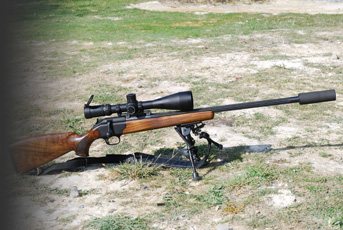 To briefly recap, I have a Blaser R93 on long term loan to use as my main hunting/varmint rifle for the next few months. As it’s a switch-barrel I opted for two tubes that would suit, first a general use 22”, standard weight in 25-06 Rem that would do the occasional fox if it got in the way, but would be more than enough for all UK deer species. More specific was the 222 Rem, which offered a 24” Match/fluted build.
Heavier but potentially accurate this was to be the main fox gun, that could also take muntjac and CWD legally in England. Plus given its ability would also make a great longer range rabbit and crow buster.

Up Front & On Top

Though it’s easy enough to use one scope and mount and simply swap it from barrel to barrel and wind in the different zero corrections, I opted for two optics. The 25-06 got a Swarovski Z6i 1.7-10x42, which struck me as a good general use spec and a brand I am very familiar with. A Night Force NXS 3.5-15x56 was used on the 222, commensurate with its accuracy potential. This combined with the heavy tube makes it a less walk about design, but that was OK due to the way I was going to use it. The final items were a pair of Ase Utra moderators from Jackson Rifles. The 25 got a North Star reflex and the 222 the new CQBS ultra compact, which is specifically for 223 Rem.
The next choice was ammunition as from past experience I knew my Mauser M03 could be fussy on fodder. I say this as the SIG groups owns Mauser, Blaser and Sauer with all the barrels being made on one machine. Not being a 222 user I had little ammo, so used what I had and decided to make the rest. The 25-06 was not such a problem as I already shoot that calibre so had a good choice, plus my pet reload.

To be honest I have always written off 222 Rem as a poor man’s 223; ‘nice little round but it’s definitely had its day’… Well I’m eating my words now, as performance was impressive; certainly with handloads. I started off with the two factory choices both 50-grain soft points; Remington Express and Federal Powershok.
The Remington’s shot around an inch with an average of 3108 fps/1072 ft/lbs, just making deer legal and certainly useable. The Federals were running at 3140/1094 but the group was edging out to two inches, so not worth consideration. But I was convinced the rifle could do better with reloads and it did.
Bullet weights ran from 40 to 55-grains using Sierra, Hornady, Nosler and Barnes with Vit N130, N133 and Hodgdon H322 powders in PPU cases with Lee Precision dies. The idea was to get an idea of potential followed by narrowing the load down to a single weight/type for all work. I decided to reject anything that stepped over an inch at 100-yards too.
Though the Hornady 40-grain V-MAX and 45-grain Hornet SP made small deer legal the bullet weight is too light as its 50-grains minimum, though the figures are good enough for fox busting. However the 50 to 55-grain group with one exception proved very promising

As can be seen there’s no shortage of winners here, with the two most promising being the 55-grain Blitz King (20.7-grains of Vit N130) and Nosler 50-grain B/T (23.9-grains Vit N 133). In terms of trajectory either load offers a 200-yard zero with around an inch either way out to 225-yards. The 50 shoots a tad flatter, though the 55 carries a bit more energy out to 400-yards, which is probably either ones effective ceiling. Given normal foxing distances, it’s just a case of point and shoot. The 222 tube shows a 1-14” twist so I was pleased it shot 55s as well as it did.

Like the 222 I discounted anything over an inch, which ruled out the reload for my Ruger Hawkeye in 25-06, as you can see it shot a disappointing 1 ½” while in the M77 it pulls an easy ¾ ”. Best was the Hornady BTSP, which clearly out performed the same weight SST load, though velocity was a little disappointing with both. Ignoring the +1” groups it looks like this barrel prefers heavier bullets and is a little fussy on shape, so I might also try some 120-grains. But as a solid and workable load the Hornady factory 117-grain BTSP is more than adequate, with a 175-yard zero point. In the end I opted for the 50-grain Nosler BT load in 222 Rem, so am now set up for both barrels. Time to put the Grendel and M03 away…

So far I have few complaints with the general R93 mechanism, with head position, butt length, trigger and general shootability being good. However, I do find filling the magazines a bit of a pain; especially the 222 Rem, as you really have to apply some effort to get the rounds past the stiff feed lips, this is less apparent in the 25-06. Finally an apology; last month I said the 222/223 magazine holds three, it’s actually four; sorry about that!
Next month hands on and walk about.