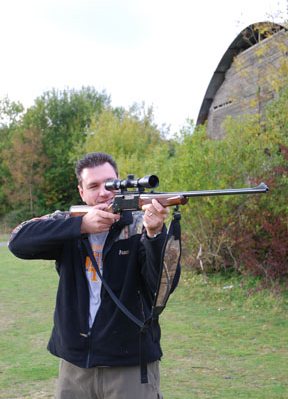 The lever-action rifle is a curious beast and as a design pretty much 99.9% American in concept and execution. First appearing in the mid/late 1800s and made famous by Winchester and Marlin, it has had a long and fruitful life. Feed-wise the standard build goes for a fixed, under-barrel tube mag that loads through the side of the action. To my knowledge only four box mag examples have been produced and of these only one exists today, as the elegant Winchester 1895, Savage 99C and the unusual Ruger 96/44 have all fallen by the wayside. With Browning’s striking and slightly unusual BLR (Browning Leveraction Rifle) being the only survivor and still currently in production.

The BLR has been with us for quite some time and gone through a few changes, but is recognised today as the only mechanism of its type that is chambered for proper magnum calibres. What sets the design apart is its blend of ‘old and new’ looks and technology, as it has an external hammer and no safety catch with more than a hint of the old Winchester 1887 lever-action shotgun and 1895 rifle about it. Yet it offers a proper box magazine and a gear-driven rotary bolt, which is not unlike that of the AR15. In essence you have a semi classic build with a fast and practical mechanism; certainly for a manually operated rifle.

I have a BLR 81 Lite with a straight-hand butt and slim, square forend chambered in 300 WSM, which makes a very handy running game gun. OK it’s a bit kicky and not the thing you would want to shoot tight groups with at long range. However, it fires a highly effective cartridge, points and swings well and offers quick back up shots with no loss of the firing position if required.

New for 2008, and now just in my hands in Jan 2009, is the BLR Light Weight Take Down, with first impressions being a much nicer rifle than my older 81 Lite. The major changes are the full pistol grip stock with right hand palm swell, rounder/wider semi Schnabel forend, longer, 23 ½ ” barrel and the fact the gun can be broken down into a compact package quickly and easily. What remains the same is the black alloy receiver and elegant but rather fragile satin/varnish finish on the walnut.

Checking out Browning’s website shows that they have cut back on the BLR and now only offer three versions. The BLR 81 Lite has now gone with just the Battue, which is a short barrelled boar buster in 300 Win Mag only. Plus the standard (fixed barrel) Light Weight and the Take-Down. Overall calibre choice covers the following; 270 WSM, 300 WM, 308 W, 30-06, 358 W and 450 Marlin. As can be seen power is the rationale here…

Due to its take-down ability, the locking mechanism, which on the fixed barrel models is a block pinned into the front of the action with the barrel screwed down onto it, has been moved to the chamber extension. Logical really, as now the bolt locks directly to the barrel (like an AR15) which means greater strength and integrity. This design as we shall see also simplifies cleaning…

Locking is by a 6-lug, rotary bolt in a long, 6-flute carrier, this engages with slots inside the receiver to stop any twisting effect. The operating lever with the lower section of the trigger mech inclusive operates a rack and pinion system. Here an internally toothed quadrant rotates a gear wheel that engages directly with the underside of the carrier which is toothed for the purpose. This imparts the forward and rearwards moments that rotates the bolt head out in and out of battery by a cam and follower, just like the AR15. This mechanism is smooth and fast no matter what calibre you have.

Feed is by a detachable box magazine with the release catch at the front and in 300 Win Mag loads to a capacity of 3+1. The only safety feature is the hammer, which has half and full cock positions. The spur is hinged and at half cock can be folded forward to move out of line with the tail of the firing pin, this is a bit different from an applied system but it works well enough. I found the best way to carry in the field is with one up the spout and the hammer at half cock with the spur folded down safe in the knowledge there’s no way it can go bang. However, it’s the work of a moment to thumb back to full cock; hardly any more effort than flipping off an applied safety catch.

The butt is deep with a high/straight comb, thick rubber recoil pad and a generous length of pull. Both grip and forend, which are nicely chequered, fill the hand well and provide a secure hold. QD sling studs are fitted front and rear and the rifle comes from the box with iron sights – a windage-only blade on a ramp up front and a basic windage/elevation U-notch at the back. This unit is identical to the one to be found on the old Browning High Power pistol and later Buckmark rifle. The top of the receiver is drilled and tapped for scope mounts and what I did like was the fact Browning have not relied on the soft alloy for this purpose but put steel, Helicoil inserts into the material for greater integrity.

Given the bolt locks directly into the chamber extension all the QD system has to do is hold the barrel in the receiver, which is does by a rising lug that engages with a slot on the underside of the re-enforce. This is actuated by a pull down lever in front of the mag catch. The job is simple; open the bolt, pull down the lever and slide the tube forward and out. One concern as ever with a switch barrel system is return to zero, as the scope mount is on the receiver, so let us see…

Big But Not Unpleasant

I fitted the Take-Down with a Kahles 1.1-6x42 CSX with automaticlight reticule, with ammunition going to Winchester Supreme Elite using a 180-grain XP3 bullet. Knowing my BLR 81 was generally a short range performer I was keen to see how the heavier/longer barrel in 300 Win Mag would do. Experience had shown me that the tube gets hot all too quickly with a subsequent loss of consistency, which is unsurprising. Plus the forend screws directly to the barrel, so no form of floating is possible.

Firing a few rounds standing showed me that this BLR was surprisingly well behaved, so I proceeded to go prone supported. At 100-yards the first two shots stayed within 1 ½-2” of each other, with the third stepping out noticeably. Again hardly surprising due to accelerated barrel heating. However, if you can’t nail it in the first two shots then; well you know… Fitting a more powerful scope would have doubtless tightened up the group size as at X6 you don’t really have enough mag to get a decent aim on a precise point. Fine for deer and the like but not for paper punching. The ammunition was producing an average speed of 2945 fps that generates 3460 ft/lbs, which lives up to the 300 Win Mag rep.

The issue iron sights are more than adequate for short range use and if driven game and boar is your main aim then you don’t really need to put glass on top. Closer inspection shows that the barrel is drilled and tapped, doubtless a standard feature that will allow the fitting of a Battue rear sight for that model. I have seen on the web mention of a rear base designed for intermediate eye relief (scout-type) scopes and red dots, which for close/medium work could prove well suited.

Feed and ejection along with cycling effort were smooth and fast with no hesitations or problems, you’ve got to hand it to Browning; they have certainly designed a superb lever-action system. The rifle sits stable in the firing position so all you do is throw your hand forward and back to cycle the action. This combined with the more than acceptable recoil makes staying on target and firing more than one shot effective. Trigger pull was not light at around 6 lbs, but was reasonably crisp and useable.

Mag changes are easy with the clip falling free and also being easy to insert on the load too. For driven and especially wild boar I would invest in a spare, as if you need more shots there’s no time to be fumbling for loose cartridges…

Though not that heavy the BLR comes over as a big rifle at 46”, which it is. I did not have any problems operating it, but someone of smaller stature might find themselves reaching for the trigger and maybe having to really stretch out to crank the action.

Taken down for stowage shows the barrel at 24 ¾” and the butt/action at 21 ½”, so just find a gun box that suits. The fixed barrel BLRs can be a pain to clean as unless you remove the bolt system you have to rod from the muzzle. Taking out the bolt is easy, but putting it back properly is not! If you don’t get the teeth/carrier in the correct relationship you will get an incomplete lock up. I found this on my BLR 81 and had to send it back to the importers as neither me nor my gunsmith could get it right. However, the take-down facility means no problems at all, as you can go in from the chamber end. On that point I could discern no real zero shift after removing then replacing the barrel for the time I had the gun on test. Only time will tell on that one…

In the UK a lever-action hunting rifle is a rare sight and frankly guns like the Marlin 336 and 1895S do not have the ability much past 100 yards in terms of acceptable accuracy. The BLR in 300 Win Mag would probably shoot about 1” at this distance with the right scope, so would be capable of reaching out further, as this calibre is a serious long range performer. However, barrel weight and heating concerns must be taken into consideration.

For me this model represents a superb wild boar rifle; hard hitting, ample accuracy for close in work with a super fast and slick action for rolling over those running piggies, or at close to medium range in Africa it would be a nice choice too…