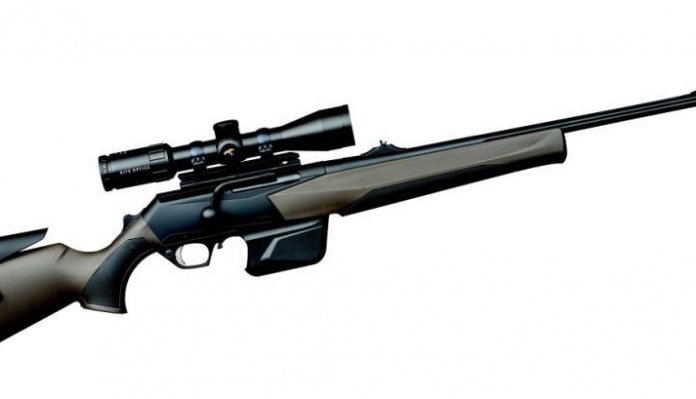 In the world of straight-pull rifles, Browning’s Maral is a unique design! Based on their semi-automatic BAR (Browning Automatic Rifle) it is however manually-operated, using a side-mounted charging handle, with the action returning to battery by a spring inside the forend. I suppose you’d consider it a hybrid, like our manually operated AR15s.

I bought their Big Game SF version last year in 30-06, primarily for driven shooting, as it’s fast action and high capacity magazine makes it ideal. The stock is good quality walnut and the sides of the receiver have engraved plates depicting red deer and boar scenes. It’s quite a departure for me, but oddly enough I like the looks and smell of the oiled timber!

The Maral line is like this with good wood and finish and at around £2k is a top-end product. It comes in a combination locked travel case and a tool is supplied so the butt can be removed, making it a handy piece of airline-compatible, gun luggage. I’ve added Browning’s Nomad QD base and have two mounts. One with a Kahles Helia CSX 1.5-6x42 scope, the other a Picatinny rail with a Vortex Razor red dot. Plus, the rifle comes with Hi-Viz iron sights, so I’m ready for anything.

Up until now, the Maral SF has not offered synthetic furniture, which I thought a pity, as it was much more up my street. But I wanted the rifle ASAP, so went for the wooden Big Game option. Recently, they announced they were going to make a synthetic (composite) version and now I have the Maral SF Nordic HC on test; so, should I have waited? Let’s see…

The basic rifle remains the same, with a high strength aluminum alloy receiver, its 7-lug rotary bolt is like an AR15s with a linear carrier that cams it in and out of battery. The newer SF designation includes an improved fluted barrel, re-designed charging handle and Browning’s Super Feather Trigger.

Instead of a standard safety catch, all Marals have what’s called a ‘hand cocker’. It’s positioned at the rear of the receiver slope and a bit like the Blaser R8, slides up and forward to ready the rifle. It puts tension on the hammer springs and can be quickly disengaged by pressing in the button on the top where it slides down.

Feed options are detachable box magazines, that depending on capacity laws in various countries, offers 4+1. Where allowed, a 9 or 10-shot version is available, which was one of the gun’s USPs for me! But where the compo really differs is in stock material and what you get in the package, which pleasingly today is significantly less money than the original wood-stocked SFs.

There are two versions, both available in two barrel lengths, 20 and 22” and two calibres - 308 Winchester and 30-06 and here’s what you get. The furniture is similar in layout to the wood version, the butt shows a straight comb, as opposed to the Hog’s back of the Big Game and is hollow with a well-shaped pistol grip and interchangeable butt spacers and three Inflex II short, medium and long recoil pads, plus QD sling swivels. The forend is the long, tapered tulip-type with QD swivel in the tip. Instead of chequering, there are rubber/elastomer inserts on the grip and forend. This build is weather proof and secure, but considerably lighter than the original. Also, new, is Browning’s adjustable comb/cheek piece, which is a useful addition.

My favourite version is the Composite Brown HC Adjustable! As the name suggest, the stock is a light brown, which does look good, which is off set nicely by the black barreled/action, grip inserts and butt pad. This model wears Hi-Viz iron sights and is threaded 14x1mm and includes a radial, multi-hole, muzzle brake and thread protector. A low (hybrid) Nomad scope base is included, but not the top mount. Smart move Browning; as when you’ve got them by the balls; their hearts and minds will follow! The base is lower than the one on my Big Game and they have had to remove the handle of the integral T-key that locks these two together. This has doubtless been done to clear the sights, instead they have slotted the shaft, so you use a screw driver to remove the optic. No big deal!

What impressed me what was also included; as you get the 4+1 and 9 or 10+1 magazines (calibre depending) a plastic travel case and mine also came with a trigger lock. Unlike the original SF, the butt on the Compo is not removable, which is not a big deal. The SF Nordic HC is identical but has a black stock with green rubber inserts and no iron sights, which will have its own appeal. Though a fan of 30-06, I think the 308 Win option will be the most popular, whatever model you choose.

Given the Big Game SF costs £2150, which is less than a Blaser R8, the Compos are considerably cheaper (given the version) as the Nordic is £1749 and the Brown £1899. Plus, if you add up the cost of the big mag, Nomad base, threading and muzzle brake and rest of the accessories that represents a big chunk of value for money.

So, you could certainly afford the top half of the Browning/Nomad base. I guess that most of this is saved by the moulded stock, which is much cheaper than quality walnut and the basic gun case!

My tester was the Nordic HC in the 20”/308 Win format, to be honest 308 can stand that barrel length, but in 30-06 a 20” tube is a bit short to say the least! And in a perfect world I would have preferred the 06 to offer a 23 or even better a 24” barrel and if I was going for the 308 then 22” please! A pleasant surprise; Browning also supplied some of their new hunting ammo; the BXR Rapid Expansion with a copper/polymer Matrix Tip similar to Winchester’s Extreme Point and BXC Controlled Expansion with an aluminum activator tip, doubtless inspired by Winchester’s old Silver Tip. They both have nickeled cases, in 308 Win you get a 155-grain BXR and a 168-grain BXC. It’s available in a number o

I was first concerned about felt recoil, as 308 can be a bit hard in the shoulder. Shooting plain muzzled with both weights, I was pleasantly surprised by the 20” Nordic HC, as it was very well behaved! I put this down to the hollow butt, which was probably flexing, so absorbing the energy. Putting on the muzzle brake did not seem to make a hugh difference.

The rifle came fitted with a Kite KSP HD2, 2-12X50i scope and accuracy testing was all done supported from a bench at 100m. The Super Feather trigger feels a bit soft, but none the less offers a reasonable break. To be honest, and apart from velocity, there was little in it for accuracy, as both loads shot around the inch. I get the impression Browning have put a bit more effort into quality control; I say this, as the 155 BXR bullet is like their Extreme Point’s with its massive, polymer nose cone, which is not the most consistent performer! The 20” barrel showed the 308’s usual tolerance to shorter tubes and lighter weight bullets, the BXR was averaging 2767 fps/2647 ft/lbs, with a sweet extreme spread (ES) of just 8 fps. The BXC averaged 2542 fps/2424 ft/lbs with a much higher ES of 44 fps. Out of interest, I shot both through a 24” barrel and got 2925 fps/2959 ft/lbs (BXR) 2670 fps/2658 ft/ lbs (BXC). Interestingly, the ES’s were similar at 16 and 51 fps respectively. Bombing up the 9+1 mag I checked the Nordic’s fast-fire credentials and that hybrid Maral action is slick and quick as always!

I see the Maral as primarily a driven game rifle, even though Browning doesn’t and in that role, it offers a lot; high capacity, fast action and good sighting options with the Nomad system. The compos score over the wooden guns on price and features!