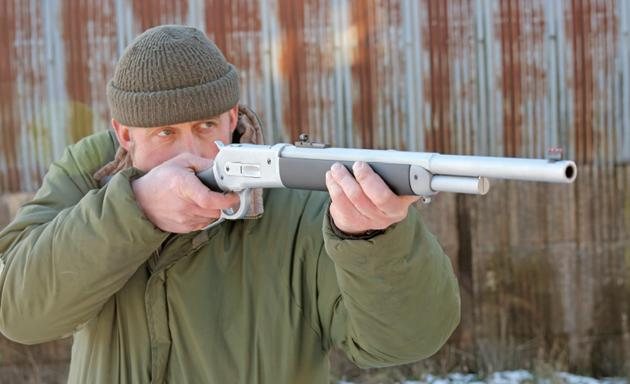 I have to admit to being a devotee of lever-action rifles; probably to do with all the cowboy films I watched as a boy! Winchester was the name of the game and these days I laugh at the fact the rifles most used back then were either Model 92s or 94s, which appeared after the end of the cowboy era as we know it. In truth the guns that did the work were the 44 rimfire Henry, which was morphed by Winchester into their centrefire 1866, brass-framed Yellow Boy and the improved, steel-framed 1873.

These were in pistol calibres and Winchester realised that to stay competitive they needed something that could handle the fullbore rifle cartridges of the day like 45-70 etc. Thus the 1876 was born, which was just a stretched 1873, and was probably on the edge of ability given its locking mechanism. Wanting more, they approach John Moses Browning, who designed the 1886. The much stronger action locked at the rear by twin rising lugs, with a solid, one-piece receiver too.

To me, the 1873 is the epitome of the classic, pistol-calibre lever-action, but without doubt the more modern 1886 is mechanically superior! I have owned both models – Uberti 73 in 44-40 WCF and a Winchester 86 made by Miroku of Japan in my favourite, big bore calibre of 45-70 Government. This cartridge was born in 1874 and is still massively popular today, some 142-years later. I think its continued success is in its ability to throw 250-500-grain bullets with devastating effect on larger and dangerous game. This calibre, combined with Marlin’s large framed 1895 and MXLR lever-action series, has become the preferred choice of Alaskan trappers and guides even to this day.

It’s easy to see why, as the guns offer a reliable and simple mechanism with a fixed and easy to fill tube magazine. Though Marlin’s 1895 Guide Gun and similar have ruled the roost, Chiappa of Italy has breathed life into the concept with their 1886 Kodiak. This model is aimed at hunters and those who require protection from dangerous animals like bear that need some stopping!

The build reflects this, the basic design remains unaltered but Chiappa has upgraded the finish to offer a gun that’s tough inside and out! The Kodiak series is distinctive with its matt, ‘hard chrome’ coating on the receiver, bolt, operating lever and barrel, that protects the metal parts from corrosion. It also contains ruthenium, a metal of the platinum family, which yields an opaque finish that will not highlight finger marks.

At first glance you’d think the furniture is black plastic but it’s hard wood with a ‘soft touch’, outer layer of matt black rubber, which makes it waterproof and also offers a good grip. The build shows a short (13.25” LOP) straight hand butt including the thick, rubber recoil pad. Up front the forend is long, deep with a rounded profile, which slots into a nose cap with a QD sling stud in its base, another sits under the butt. The 18.5”, ½-octagnoal/ ½-round barrel shows a heavy profile, with a tall, windage-adjustable blade with red fibre insert. The rear sight is a Skinner’s aperturetype, with a windage/elevation-adjustable ghost ring. The top flat of the barrel is drilled and tapped; doubtless for a scope base, though Chiappa’s catalogue does not show one. Feed is from a 4+1 under-slung tube magazine, with a loading gate in the right of the action.

This example, though short, is heavy at 8lbs. There are also 16.5”, 22” and 26” options, with the 26” tipping the scales at a hefty 9 lbs, with a capacity of 8+1; now that’s a lot of firepower! There’s no safety catch, with the hammer offering half and full-cock notches, the former acting as a condition 1 (loaded chamber) safety, as it has to be thumbed back to fire. The trigger is firm but breaks crisply at around 6lbs and the ejection path is vertical from the open-topped receiver, which precludes fitting optics over the action! Overall this is a clean and well presented design, though very much a horse for a course.

To load - rounds are pressed down and forward into the gate, a system that allows topping up at any time, though if you need more than five you’re probably in serious trouble! I used Hornady’s, LEVERevolution, 250-grain, FlexTip, MONOFLEX ammunition. This gets over one of the main issues of tube magazine lever-actions, which by necessity had up until the advent of LEVERevolution use flat-nosed bullets, as the ammo is stacked nose-to-primer in the magazine to negate a possible chaindetonation if using more ballistically efficient pointed bullets.

The nose has a flexible, polymer point, which means better down range ballistics, easier loading and no chain fire problems. Hornady quotes figures of 2060 fps/2310 ft/lbs, to its credit the short, 18.5” tube produced 1915 fps/2066 ft/lbs. Compared to a 308 not that impressive, but you have to consider you are chucking a big bullet, that what it loses in speed and energy, makes up for in sheer weight of metal. Recoil was also pleasing, though with heavier bullets things can get a bit lively. You need to be firm with lever operation too as if not the shell lifter does not rise to feed the next round. I found it best to feel it bang against the stop as you open up for best reliability!

The iron sights work well and are easy to pick up on and centre, at 50-yards the Kodiak was turning in 1.5/2” groups, but an intermediate, eye relief (IER) scout scope would be my choice and also offer a lot more accuracy potential. Saying that and despite the LEVERevolution’s greater potential, this is a close up and personal gun. As a long term 45-70 shooter I would sooner have the 22” Carbine as they call it, which offers a 7+1 payload and strikes a good balance between handling and ballistics.