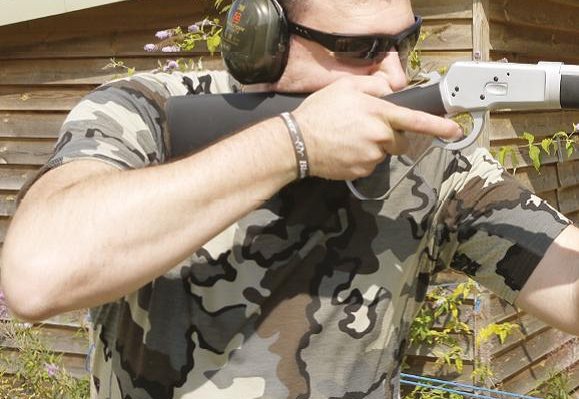 The expression ‘horses for courses’ is never more true than with what many see as an archaic design - the lever-action rifle. Slower to load than a box magazine system, yes, but reliable and you can top up the mag at any time. In the real world many Alaskan hunters, guides and dog mushers favour big bore (45-70 & 450 Marlin) lever-guns with the Marlin 1895 being at the top of the tree. Chiappa of Italy covers a huge range of gun types from muzzle-loading muskets, black powder cartridge rifles to .22 semi –auto rifles and pistols also offer two types of lever-action.

The majority of their family of lever-action are based on the Winchester 1892 as designed by John Moses Browning (JMB). Many feel that the 92 was/is superior to the most famous Winchester the Model 94. Personally I like the twin, sidemounted locking lugs and the fact the ejector is strong and incorporated into the breech face. The receiver is round bottomed and the opening for the lever is small, so and unlike the 94 there’s less chance of getting crud inside the action. The only real downside for today’s shooters is the fact you cannot mount a scope over the action as the rifle ejects up and back. Side mounts are available but not that good as they place the scope to the left of the action, which I have never found conducive with ease of use.

What I have here is not your usual, run-of-the-mill cowboy gun! Called the Alaskan it shows all the features of the 92 design, but has improved on the sighting system and finish along with a few other significant features. They are available in 16” carbine and 20” rifle variants with medium weight octagonal barrels. Calibres are 44 Remington Magnum (16 & 20”) and 357 Magnum (16” only) and are take-down actions using the original TD system thought up by JMB.

As a slight aside they also offer the larger framed 1886 (yet another JMB design for Winchester) chambered in that true classic calibre that just won’t go away – the 45-70 Government. Called the Kodiak it’s identical in build to the Alaskan in style and finish though shows a half-length magazine tube and no take down facility. It’s also slightly larger and heavier. Importers Edgar Brothers sent me one of these too, which will be on test in the near future.

Visually the Alaskan range is distinctive as it has what looks like a black rubber stock and a brushed stainless finish. The furniture is actually wood with a thin, rubber, over-mould on top and does give a high level of protection to the timber underneath. The barrel/action looks stainless but is carbon steel with a hard chrome (matte) finish that appears to be highly corrosion resistant. Chiappa says that the rifle is built for hunting and I would agree.

My example came in 44 Magnum, which in a rifle like this is a great calibre; Chiappa also says that it’s optimised to be used with Hornady’s LEVERvolution ammo. This covers a range of lever-action calibres using special powders and bullets optimised for maximum efficiency and tube magazines that stacks the ammo point to primer. They say that it can give 200-250 fps more velocity over standard calibres.

Hornady’s 44 Magnum load uses a 225-grain FlexTip bullet and in a 20” tube generates 1870 fps/1747 ft/lbs so large deer legal and a good if non-British choice for close-in work. Plus 44 Mag has always been an accurate cartridge!

I did not have any LEVERevolution and used PPU 240-grain jacketed, truncated cone, which is a target load, which produces a healthy 1541 fps/1290 ft/lbs. Good enough for small deer species too with an expanding bullet!

There’s no doubt the Alaskan is a good looking rifle! Most notable and as can’t be ignored is the large, triangular loop on the operating lever. This I hasten to add is not done for cosmetics nor for swinging the gun around and in true Rooster Cogburn (True Grit) style saying: ‘fill your hands you sons of bitches’! It has a practical function for cold weather usage as you will be wearing gloves if not mittens and the large loop allows your hand to fit inside easily and work the action. In truth there’s very little difference in operating speed when compared to a standard and slimmer rectangular loop.

The action is slick to operate, with a smooth wide trigger blade that breaks at a crisp 4-5 lbs. There’s no safety, which is not really required on a rifle like this as the hammer offers half and full cock positions. Meaning you can carry with one up the pipe at half cock, here the hammer is locked in place, when the shot presents itself it’s a moment’s work to thumb it back to full cock and fire!

Loading is by a sprung gate on the right of the receiver and rounds slide in easily enough, spring tension on the gate allows you the old lever gunner’s trick of pushing the round half in to keep the gate open and so on until full. On that point the rifle hold a generous 10 + 1 in either calibres and 8 + 1 in the 16” variant.

Take-down rifles have an appeal and also a place certainly in the hunting environment. When disassembled they pack down into a smaller space and are also easier to clean properly. The process on the Alaskan is classic Winchester – open the bolt and flip the lever at the end of the mag tube down and rotate it/the mag tube anti clockwise until the tube is free and can be pulled out. In this position rotate the barrel/forend assembly though 90° where it’s interrupted thread will disengage and pull it forward and out of the receiver. Just to note when the mag tube is fully engaged its nose sits about 1mm lower than the muzzle!

The sights consist of a Skinner Express at the rear and a tall blade up front in a transverse dovetail with a day glow orange bead. The Skinner offers an aperture set on a low base, which is both windage and elevation adjustable by screws, you can also get different size aperture inserts. To me it’s like a ghost ring system, as the aperture is big enough to easily pick up and centre the orange dot. Compared to the more traditional V-notch you can see a lot more of the target and both acquisition and line up is quicker too. At 100-yards standing I was easily and regularly hitting 4” clay pigeons!

Chiappa have also drilled and tapped two more holes on the barrel and I would imagine there are bases to suit, so you could fit a red dot or an intermediate eye relief (IER) Scouttype scope, which would be my choice. I thought it a pity that this was not supplied with the rifle as it would make it more appealing!

According to Chiappa’s tech spec sheet the 20” Alaskan weighs in at 6.6 lbs, which is not a lot, but the barrel puts most of that up front and the gun does feel a bit nose heavy. Not a problem as this offers good stability in the aim and aids recoil control, as a full patch 44 Mag can be a bit lively!

The ammo thumbs in easily enough with little hesitation and I feel 10+1 is a generous payload. The action cycles smooth and easy and I have to say on some other Win 92 clones I have found the guns clunky and stiff, which is not conducive to shootability. Recoil with the PPU load was very agreeable and I would expect a bit more grunt from the LEVERevolution given its’ running around 250 fps quicker.

I zeroed for 50 yards and I doubt that you would want to be engaging live targets past 100 with the irons! Though at that longer distance the Alaskan proved it could easily shoot into a 4” circle. With an IER scope on top then 200 yards would not be an issue. I also found myself liking the larger operating loop, in fact preferring it to the standard style. There’s’ less wear and tear on the hand and it loses little in speed and scores in easier access. For me 44 Magnum is the only pistol-type calibre for this sort of brush-busting rifle and I’d go with the LEVERevolution 225-grain load for any form of hunting. Though I imagine the looks and build of the Alaskan will apply to many club shooters, the truth is it’s a bit wasted in that role as it’s built to hunt and not count the cost!