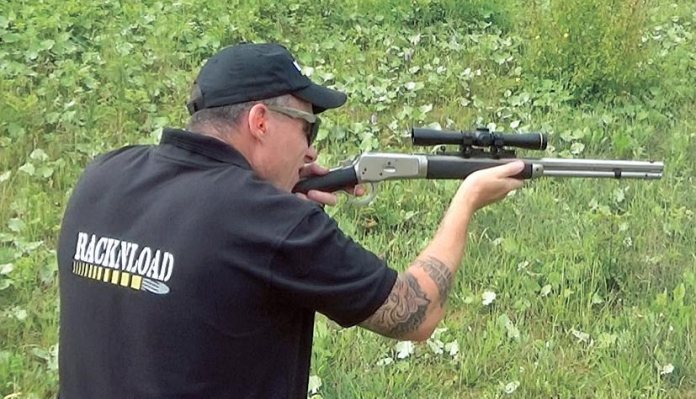 I’ve reviewed quite a lot of lever action rifles in the past and the most memorable has to be the Henry .45-70, that thing was an absolute beast. In fact, it makes this puny .44 magnum look like a peashooter! But, the .45-70 is just as painful in the wallet as it is in the shoulder with the cost of ammunition! Whereas the .44 magnum, especially in a rifle, is more forgiving on both. Chiappa bring a nice practical package with the Alaskan Takedown.

So then, let’s take a look at the Chiappa Alaskan Takedown. Like I said, this one is chambered in 44 magnum, .357 magnum models are also available. So, as you can see, the Alaskan looks pretty weatherproof what with its tough exterior. The stock and forend are actually rubber-coated wood or soft-touch, like what you get on some airguns. I do like the feel of soft-touch, but it does make me wonder how the rubber will stand the test of time, what with extreme cold and UV sunlight. I’ve not actually heard of any bad reports about stocks deteriorating as of yet, so that’s a good thing. The black stock does look good though against the chrome matte finish. The stock has traditional 1892 lines, and to me that means a pretty straight pistol grip. My personal preference is to have a shaped pistol grip, if that makes sense, as I personally prefer a more rounded grip. What does surprise me though with this rifle being an all-weather, is the fact that there is no checkering on the pistol grip or on the forend. But to be fair the soft-touch is quite grippy and does offer good traction in the wet – blimey, I make it sound like a tyre!

Now, just in case you were wondering why the scope is a little forward of the action, it’s because this rifle is a top ejector, so if the scope was in the traditional position it would interfere when cycling the rifle and spent cases would obviously hit the scope, which would not be good. Moving on to the actual action itself, it is steel, feels solid, and the finish seems pretty good, but this rifle is certainly not a Henry nor is it a Marlin. As you can see, there is a big loop on the lever, this would obviously be to accommodate a gloved hand, and also the trigger guard is somewhat bigger, again to take into account the wearing of gloves, hence why it’s called the Alaskan!

Moving on to the top of the receiver, you can see all the top side of the action and bolt what with this rifle being a top ejector and, to be honest, it is a bit weird when you cycle the action whilst looking through a scope, as spent cases jump out of the top and through your line of sight. But that said, after a few rounds you hardly notice it.

As you can see, this rifle had a small Leupold scope fitted and was really quite effective. I would personally have a red dot sight or something like, but the rifle does come with open sights with a fibre optic front and a Skinner Express rear, which is just like a ghost ring. Moving onto the barrel, you can see it is octagonal and, whilst being a modern rifle, it still looks great with its classic lines. The forend has the usual classic looks as any 1892. Again, it is in soft-touch which is basically rubber over moulded wood.

Now this is where it gets interesting! At the muzzle end, looking at the end of the magazine tube you will notice that there is a little lever that is folded away. Once opened out you can then unscrew it fully until the magazine tube can be pulled away from the rifle. Once you have done this all you have to do is hold the pistol grip and the forend and twist. the barrel and forend will then come apart in two. Now here in the UK it’s not like you can then just throw it in a backpack and go up into the mountains hunting is it? But having a takedown rifle certainly makes life easier for storing, carriage and for cleaning and maintenance. Worth noting too, if you have an optic mounted on the rifle, it will not lose zero when the gun is taken down.

So how did it shoot then? Well, pretty damn good! I set up a paper target at about 50-yards and various steel gongs between 30- and 50-yards. I was using Magtec 240gr rounds and they were pretty consistent on paper, leaving group sizes at 50-yards of around 3.5-inches or so, so that’s not too bad, especially what with me shooting it and in a standing position too. But, of course, my steel gongs attracted most of the lead! And those 44 Magnum bullets were clanging those steels very satisfactorily! I had no issues loading the rifle and cycling the action was pretty smooth. It just takes some getting used to the fact that this rifle is a top ejector and that you have brass flying past your eye!

Overall, I think the Alaskan is a good rifle. Yes, I get the fact that it’s not a high-end gun, but the quality is very good for the price that you pay. It’s a practical rifle that is tough, and the fact that it is a takedown gun is an added bonus. Safe shooting! Rack.