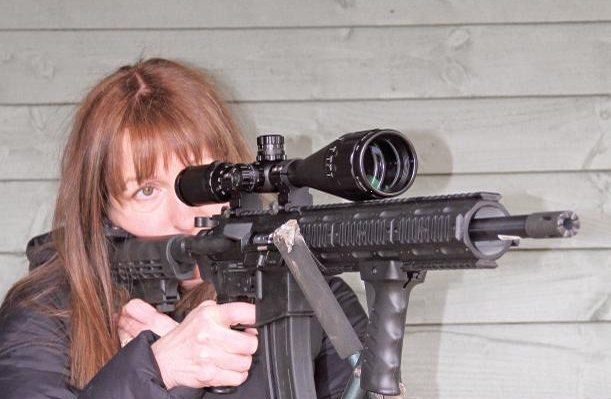 Chiappa are an Italian based firearms manufacturer, famed for their reproductions of classic guns and in this case the legendary AR15 in the modern form of the M4 chassis. It allows lovers of the M16 genre rifle to shoot this style of rifle with cheap .22LR for some really fun shooting.

This model comes with two 28-round magazines and has a collapsible stock and full length Picatinny scope rail and aluminium forend. It offers all the familiar M4 controls, some functional and some not, for an authentic look and feel. As with all of this type of semi, it is recommended to use .22LR high velocity for best results and allow a break in period of 100-150 rounds.

If you enjoy shooting a semi-automatic rimfire with that Tactical look, then the Chiappa has a good build for a keen price.

The Chiappa action is made as a moulded, two-part polymer shell, made from a toughened synthetic that has a black semi textured finish. It splits into lower and upper sections but is only compatible with Chiappa uppers. It has the overall design and look of the original M4 but some of the features are faux. The bolt assist works but does not touch the bolt itself and the bolt stop lever is nonmoving, but you can change the pistol grip if you like for an alternate M4 aftermarket type.

You have a pressed steel cover on the ejection port that flips open when the Chiappa is cocked and exposes the bolt itself. This is polished alloy with a single claw extractor and an ejector stud fitted to the left side of the receiver and ejects the cases as the bolt retracts and the slotted bolt allows this spur to hit the cases rim and flicks it out.

To cock the M4, you have the cocking lever at the rear of the action as usual and to release and pull back you ned to pull and hold down the steel blued lever first and the cocking handle can then be redrawn. With a scope fitted, this operation is very tight. You can lift the upper receiver by removing the securing pin sited above the pistol grip, which tilts the action and allows access to the bolt and trigger mechanism for cleaning.

The barrel is 16-inches long, 1 in 16-inch rifling twist rate, medium profile and has the forend support around its rear end via an aluminium collar. You have a matt blued finish and the muzzle is threaded for a muzzle brake, which sets it off well. If, however you wanted to fit a sound moderator, unscrewing the brake reveals the ½ UNEF thread beneath and I therefore fitted a MAE 22 stainless steel suppressor

The trigger is pretty simple, no need for ultra-precision here and the blued, smooth steel blade gives a length of pull of 13.5-inches with the butt stock set at mid-way position. This is a single stage unit and has a pull weight of 5.5lbs and it breaks quite cleanly and has a distinct reset or return to sear engagement between each pull.

The safety is your standard AR15 platform type, with a positive lever type unit with serrated raised section that points to fire in the up-right position. Turn to 9 o’clock and the trigger is blocked and the Chiappa is safe. You also have an indication of the safety position on the right side too, as a small circular indicator shows with an arrow where it is safe or not.

The magazines are available in 10 or 28 sizes, I had two 28-shot magazines with the semi banana style and open view cartridge follower/reloading catch. They are all polymer with a polymer follower and spring captive in the front end of the magazine recess. They are easy to load but, yes, as the instructions said, you need to run them in for best functioning, see field test.

The two-piece stock is your typical M16 type with a removable rear and front section. The rear stock is the collapsible type and as such allows a degree of flexibility as regards fit to the shooter by altering the length of pull. You have a metal central buffer tube, on which the sliding rear butt moves. This rear section is polymer, so light and weatherproof. You have a single large operating lever to the base that is sprung loaded on a knurled spur. Push in the lever and the butt can be slid into position and located in holes drilled into the underside of the buffer tube.

There is a built-in metal sling swivel loop set into the bottom and there is no recoil pad; instead, just an angled plate with a chequered surface for grip. There is no cheekpiece to speak of, but the in-line nature of the butt section allows a good eye alignment to the scope.

The forend is a one-piece aluminium casting that screws into the front of the action face. It is wide and allows the barrel beneath to free float for most of its length for better accuracy. On the four faces to this forend grip are three separate Picatinny sections screwed to each side; 12 in total, allowing plenty of space per side to add lasers, lamps, NV kit or additional grips. I had the forward pistol grip section moulded from polymer and it certainly is more comfortable than gripping the Picatinny railed forend.

No sights were furnished with this model but Armex did send down an Enfield scope that they wholesale. This was a 4-16 x50 AOEG model, which for £92.99 is a bit of a steal with clear optics, adjustable objective and illuminated reticle.

I fitted the Enfield scope with the mounts provided and started to zero in at 30-yards to start with. First up with a scope fitted the cocking handle becomes awkward to access. I would fit the scope further forward than normal to allow better use. However, with a bit of practice I managed a thumb to unlock and then extended finger approach to cock the Chiappa.

I choose a variety of ammunition, both high velocity and subsonic, to see how the Chiappa functioned and how accurate it was down range. First up, you do need to run it in; the magazines, as with all the semis I have tested, need a degree of use to smooth themselves in to a perfect function. Polymer on polymer can lead to wear and unburnt powder and grit can hang up the mag follower causing hang ups.

After a few boxes of ammo, the Chiappa had got itself together and mag failures were reduced significantly. I would still use HV as stated and use a rounded, lightly greased/lubed bullet for better function. Some of the truncated designs were problematic to feed reliably.

First up were the RWS HV hollow points, which are always accurate and function well in semis. I had a few hang ups but good accuracy of 0.85-inch for five shots at 30-yards. Velocity from the 16-inch barrel was 1221fps for 133ft/lbs energy with that 40-grain bullet.

Federal also make a couple of HV loads and these are really for hunting use but the heavier of the two, the 38gr Game- Shoks functioned well in the Chiappa. I had 1244fps and 40ft/lbs energy, with just under an inch grouping at 30-yards.

Eley also make a subsonic semi auto friendly round; due to its heavier 42-grain bullet, it provides more inertia to cycle the action. This Contact round shot 0.55-inch groups for 1073fps and 107ft/lbs energy; a good all-rounder in the Chiappa.

I wanted to try some subsonics, as these are what I shoot the most and it would be interesting to see if they functioned and how accurate they were. I removed the muzzle brake that revealed the ½-inch UNEF thread and fitted the really good MAE 22LR STS rimfire moderator; with this MAE, subs became a whisper.

Subsonic ammunition can cause functionality issues, due to the lower velocity but some rounds use slightly heavier bullets to cycle the action correctly. Eley subs made 1027fps and good accuracy at 0.55-inch but a few didn’t fully cycle; this is not the Chiappa’s fault, it states HV only.

The Winchester Max 42 grainers fared better, with good functionality and accuracy at 0.75-inches but the long, truncated bullet hung up a few times.

As far as M4 22 rimfires go, this Chiappa is a good representation of that iconic rifle and is also good value. It shoots HV ammunition well after the run-in period as stated and accuracy was impressive. The Enfield scope was also a surprise, but I think a shorter scope or red dot sight would be better.

A good all-rounder and fun rifle that will burn through a lot of rimfire in a morning’s shooting!