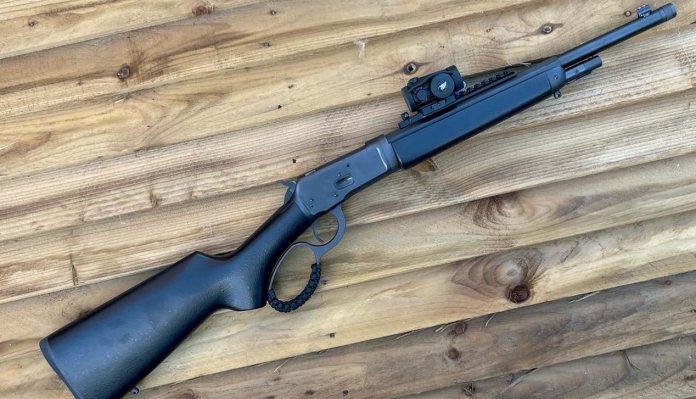 The history of Winchester’s leveraction rifles is a long and winding road indeed and was very much a case of cherry-picking and improving from the earlier 1860 Henry design. Without a doubt, their 1873 was the flagship and a beautiful rifle in its own right, but it was only chambered in pistol calibres, meaning it was lagging behind other manufacturers, who were offering big bore/full power alternatives for both hunters and lawmen alike.

Their solution was obvious, scale up the 73, so the 1876 was introduced. However, its toggle locking system, although beefed up, was at the limit for the more powerful calibres. Enter John Moses Browning, who took the brand in a better direction that still exists today. His Model 1886 used twin, vertically rising lugs that locked the large, rectangular bolt at the rear of the action, along with dispensing with the 1873/76’s rectangular feed block. Add in a larger and stronger steel action and you had a solid design that could handle most calibres of the day. I had the pleasure of owning an 1886 in .45- 70 Government with a 26” octagonal barrel, and what a lovely piece of work!

Six years later, Browning introduced the 1892, which was very much an 86 in terms of locking and design but scaled down slightly for those wanting a lighter, pistol calibre gun, or for the smaller rifle rounds of the day (32-20 and 25-20 WCFs). Two years later and Browning did it again with the 1894, which like the 30-30 WCF, is what people even today associate the brand with.

The current Winchester website shows all of the models from the original 1866, through to the 1895 box mag gun, including the 1892 in five options. How hard it would be to get them into the UK remains to be seen. But if that’s your poison, we can look nearer to home, as what I have on test is the latest lever-action from Chiappa of Italy, the WildLands, which uses the 92 action in a semi-modern format.

Amongst what is an eclectic choice of firearms, both historic and modern, Chiappa offers two centrefire Winchester types with their 1886 and 1892, in both traditional build and finishes, plus something more modern too. These latter guns seem to address the current fashion for compact carbines aimed at those who want a survival-style rifle or hunter. Calibre choice is limited, with the 1886 Ridge Runner offering the venerable .45-70 Government and the 1892 Alaskan and latest Wildlands in .357 and .44 Magnum. There’s also the option of a take-down model, which like the gun, faithfully follows the Winchester design.

My tester came in .357 Magnum, with a medium/heavy, 16.5” half round/ half octagonal barrel. Unusual is the fact it’s threaded, so you can fit a moderator or a muzzle brake, which addresses a need for modern users. A great cartridge for the UK market, as it very much suits the club shooter who wants a handy and compact, pistol-calibre, lever-action carbine for action-type shooting. Equally useful, it can also feed the shorter .38 Special too, which is identical apart from the COL (cartridge overall length). Its capacity, however, is a bit of a conundrum, as it’s just five, which is probably a bit low when compared to the more generous 10+1 of a 20” 1892.

The layout is pure 1892, with its twin, rear-positioned locking lugs and a half/full cock external hammer. As per the original, there’s no safety catch. The receiver is open-topped and ejects up and back, which precludes the fitting of an optic over the action. Loading is by a Hall-type gate on the right of the action and the operating lever has a large loop with the underside wrapped in Paracord, which makes it a bit more comfortable on the backs of your fingers when you operate it. The size of the aperture allows easy operation with heavy gloves on.

This may seem odd to us Brits, but guns like the 1886 and Marlin 1895 in .45-70 are the chosen firearm of Alaskan game guides. This is due to their reliability in all weathers and the devastating firepower provided by this old, ex-military cartridge, especially for larger bears etc.

However, a little academic for the UK market, as .45-70 is probably too powerful for your average UK, pistol calibre range. So, the attraction of the .38/.357 Magnum pays dividends - easy recoil, fast action. Plus, with more people using red dot sights and/or low-power compact scopes for this sort of use, manufacturers of lever-guns are now offering barrel-mounted Picatinny rails. It may look a bit odd on a 130-year-old design, but modern optics seem to be preferred over the traditional, semi-buckhorn, elevator wedge irons sights.

In the case of the Wildlands, there is a short section of Picatinny rail, backed up by a fully adjustable, Skinner’s Ghost Ring rear sight. Up front is a tall front bade in a transverse dovetail with a hi-vis red insert.

For those unfamiliar with a Ghost Ring, I’ll explain. It consists of a large, threaded aperture that inserts can be screwed into to vary the size. The large diameter allows easy and instinctive target acquisition and fast line-up with the front blade. However, the downside is that being an aperture, it doesn’t work as well in low-light conditions. I fitted a GPO (German Precision Optics) Spectre 3MOA red dot, which really suited the rifle.

Cosmetics will appeal to some, as the wooden furniture looks like it has a textured black finish. The barrelled action is semi-matte too. Personally, I prefer the stainless/ grey laminate found on some of the other models. My example was the take-down model, again, a bit of a mixed blessing as it adds to the price and is really not something very useful in the UK. Perhaps the best feature is it allows you to carry the gun in a short bag, but it’s really aimed at US outdoor/survival types.

Mechanically, the take-down feature is a time-proven design. The barrel and forend complete, attach to the receiver by an interrupted screw thread, this unit is locked in place by a removable magazine tube. The process is simple, just open the lever to clear the breach block, flip the locking lever down at the end of the mag tube, and unscrew it until you can pull it out. Now, grasp the forend and action before twisting the former up 90 to separate the two parts.

In use, I found this operation very stiff and had to kneel on the receiver to give enough purchase to do the job, equally so on insertion. On reassembly, you must ensure that the two components are exactly aligned, otherwise, the mag tube will either be hard or impossible to screw in. In fairness, it does ease up after time, but I’d sooner save the money than have this option!

Chiappa has done a good job of recreating the 1892, as it’s well made and offers a smooth action from the box. Rossi of Brazil also makes a 92 repro, which has a rep for being very rough and can take some time to run in. For me, the Wildlands in .357 Magnum is neither fish nor fowl, as its capacity is a tad low for club competition use, which puts it more in the hunting realm.

I was on a retailer’s website and they bill this model/calibre as the ‘ultimate woodland stalker’. This is very misleading, as your average factory, 158-grain .357 load, even from this 16.5” barrel, would be hard pushed to make 1400 fps, equally so a reload. You would need to generate in excess of 1700 fps to comfortably make the small deer legal, 1000 ft/lb requirement, and reaching 1700 ft/lbs is a pipe dream. You’d be better off with this gun in .44 Magnum, if you have hunting in mind, but even then, maybe not!

For paper punchers, I’d suggest the Alaskan, as is the same but features an 8+1 capacity, which is better. That aside, the rifle loaded easily and worked well, with its smooth and slick action. Ammo went to PPU’s 158-grain, fully-plated, truncated cone and a reload using a 158-grain, lead semi-wadcutter, with a maximum charge of Ramshot True Blue powder, giving around 1380 fps. The ammo and components were both supplied by Henry Krank.

One thing I would say is don’t baby the action, as that causes problems. It’s best to slam the lever fully open and closed with authority, as this way you’ll have no feeding/ejection issues at all. The price for the Wildlands is around £1400, which is a chunk of money, but then again a comparable Marlin 1894 is around the same.