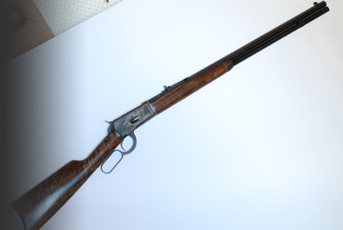 I think regular readers will know by now that my favourite lever-action rifles are the Winchester 1873 and 1876. Not perhaps the most advanced designs as both can trace their parentage back to the Volcanic and Henry guns of the 1860s. But to my eyes gorgeous and technically Winchester’s last, in-house design.

After that the legendary John Moses Browning stepped in and gave them the big 1886, which was the first Winchester to show twin rising lug locking at the rear of the action and an improved shell lifter system. In truth the 76 which was just a big 1873 was nothing more than a stop gap design to give them a large cartridge rifle, until the 86 took over. However, this gun was not in the popular pistol calibres of the 1873 – 44-40 WCF, 45 Colt etc and 6-years later JMB gave them the 1892.

Many people feel the 92 was the pinnacle of Winchester’s lever-action rifles, even over the later 1894 and certainly the modern AE versions, which suffered badly from a weak ejector design. Though using mainly pistol calibres the action is long and strong enough to take rounds like the 30-30 too.

In terms of classic reproductions it’s Uberti’s Henry, Winchester 66, 73 and 76 that are the most popular. I have only seen two examples of the 92; one I believe was from Armi Sport and the other the Brazilian Rossi Puma. Chiappa have really gone to town on this model as they offer a number of versions from 16” carbines to 24” rifles in both solid and take-down configurations. Plus engraved and chromed options too. They also make a John Wayne style, Rio Bravo carbine with the big loop (saddle ring) lever, plus the cut-down, Mare’s Leg. This shows a 12” barrel and abbreviated butt and is UK legal as it’s 24” overall, though what good it is remains to be seen.

What I have here is the newest example chambered in 44 Magnum, which attests to the strength of the 1892 action as the Uberti guns can handle 357 Mag and 45 Colt but currently are not cut for this big magnum.

The rifle shows a blued, 24”, octagonal barrel with a full length magazine tube that connects/stabilises by a ring as opposed to a full band, which I think looks a lot cleaner. The straight-hand stock is walnut and both pieces match pretty well. The action, operating lever, trigger, crescent butt plate and forend cap are all colour case-hardened. Overall fit and finish is good with decent wood to metal joining. Sights are the familiar, semi-buckhorn elevator wedge at the rear and a medium width blade up front in a dovetail for coarse windage.

Loading is through a sprung gate on the right of the receiver to a capacity of 10-rounds. The action is open-topped and empty cases are ejected straight up and back. There is no safety catch as is to be expected, but the design uses a half cock notch on the hammer (pull back one click) to keep it from contacting the rear of the firing pin. Operation is smooth and easy with none of the graunchy feel and mandatory running in time of the Rossi Puma.

Apart from 44 Magnum calibre choice covers 38 Special, 38/40 Win, 357 Magnum, 44/40 WCF and 45 Colt. For range and western-type shooting 38Spl/357 Mag is more than enough and easy off the shelf ammo too. Frankly unless you fancy a short range hunting lever-action 44 Mag is wasted, as it’s a bit over the top.

I used Magtech 44 Mag through the 1892 and the rifle shot very well indeed. At 100-yards supported off the bench you can keep it all inside a 4” circle. With more precise sights that could probably be improved too! Recoil was a little noticeable; not perhaps helped by the slim, steel crescent butt plate that does pinch in the shoulder a little.

Feed and function were fine with a reasonably smooth and easy action stroke that you did not have to force to chamber etc. Though apparently accurate in terms of dimensions; I found the size of the loading gate a bit small and my fingers and thumb got sore after filling a few magazines. But overall this is a good reproduction of the Winchester 1892 and one that some western and classic shooting fans will doubtless welcome as it adds yet another model for consideration.

Earlier on I mentioned the trouble the current Winchester 94AE rifles have with ejection. Given the 94 was based on the 92 the two ejectors are like chalk and cheese. On the latter there’s a big and strong plunger that makes up part of the breech face, which pops out as the bolt comes to rest to kick out the empty. The AE uses a flat, slotted plate that sits under the bolt and after not much use this bends as it has no inherent strength. It’s hard to believe that the general good design has been down-graded so much over the years…

Price-wise nothing is cheap these days, I recall paying £400 for my Uberti 1873, 30” Sporter when I competed in British Western Shooting Society (BWSS) competitions back in the mid 90s. Today a comparable 24” version costs around £1000. The Chiappa 1892 comes in at £895, so is still quite expensive. However like most classic guns it’s a specialised item; so if you are looking for one then I feel you are more prepared to pay the going rate.

The importers Western Shooting Supplies also bring in Sharps variants and the Chiappa catalogue shows the Armi Sport Spencer rifle and carbine in the more sensible calibres of 44/40 WCF and 45 Colt as well as the original 56/50 and ersatz 45 Schofield offerings. I am not sure if they are going to bother with this unusual lever-action but it would be nice to have a play…

We Reckon:
• Nice repro of the 1892 Winchester
• Gives more choice to classis and Western shooters
• Very much a niche market product