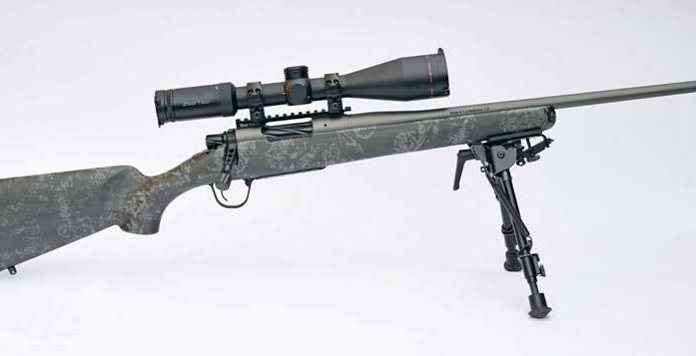 I quite like design and engineering purity. I appreciate when no excess is added above and beyond the critical details required to make a device function. The Remington 700, which was first released in 1962, has forever symbolised this for me, yet although I have owned, borrowed and appreciated many, the purity never evolved alongside modernised manufacturing capability. Many were customised and the core dimensions of the design and its bedding ‘footprint’have been assumed by many other rifles now. The Christensen Arms Mesa FFT is a great example of what Remington’s rifles might themselves have become.

The twist rate on this 6.5 Creedmoor is 1:8, to stabilise common 6.5mm bullet weights and longer copper slugs. Christensen offers a sub MOA guarantee on this rifle and advertises a hand-lapped finish to the button rifled bore, plus a ‘match’ chamber.

The composite stock forms an excellent visual contrast and offers a stiff forend, which fully free-floats the barrel in all conditions. There is a solidly anchored stud on the underside for a bipod or sling, with a similarly secure fitting under the butt.

The familiar, Remington-like cylindrical action has a recoil lug sandwiched by the barrel’s tenon. Highland Outdoors supplied a Tier-One Picatinny rail for the review and everything fitted in position with precise threading on the action bridges.

Twin lugs lock the bolt into the action’s abutments, meaning a 90º lift opens the receiver and cocks the firing pin. The skeletonised bolt handle is 70mm long, with a fluted teardrop tip. Fluting also features along the bolt shaft, which has a push-feed face with a right-side extractor claw, and plunger ejector on the left. The external bolt release catch is on the left of the rear action bridge.

Some chamberings available for this rifle are offered in full left-handed format, which is an attractive selling point for Christensen.

Trigger Tech’s singlestage blade has a deep curve with longitudinal ribs for grip. It is user adjustable from 2.5-5lbs/1100-2300- grams and can be altered using an Allen key. It broke crisply at 1360-grams. When delivered, there was no thread lock blobbed around to discourage tuning on these excellent triggers.

The 2-position safety catch moves forward for FIRE and back for SAFE (without bolt locking). It’s positioned on the right side of the action. The spiral fluting on the bolt’s black shroud continues styling cues, with the silver rear of the striker acting as a visual and tactile cocked action indicator.

You can’t lose a floorplate

There’s a serrated release catch inside the front of the trigger guard. With a quick press, the contents of the mag are dropped into your waiting palm. The cover itself carries a carbon-like pattern.

You load the rifle by pressing rounds onto the follower through the ejection port, where they alternate in two staggered columns within the stock’s liner. The ejection port has been scalloped at the rear to improve loading and ejection performance. The magazine follower is polymer to reduce brass damage and to minimise noise as the rounds slide along it. No stoppages or damaged bullet meplats were encountered throughout the review, as each rose smoothly onto the feed ramp toward the chamber. The bolt’s raceways along the action walls were all smoothly finished, without sharp edges to snag your fingertips when loading.

It’s ambidextrous, with a slim, open-radius grip, transmitting linear recoil impulse through the recoil pad and your shoulder. 6.5 Creedmoor produces minimal recoil, but if the rifle was chambered in .300 Win Mag, it would be much livelier. Saying that, buyers have to accept this is a featherweight hunting rifle designed for solitary shots after a long carry. It’s not designed for long shot strings at the range.

Stainless steel bedding pillars are fitted within the inlet, as well as small regions of ‘spot bedding’ compound around the recoil lug pocket, easing any action stress within the precisely machined inlet. I tested action screw tension to assess bedding stress and I’m happy nothing untoward was present.

The Mesa’s dark grey tungsten Cerakote contrasts gently with the lighter highlights on the stock that break up the overall shape. I like the styling a lot. It’s a matte finish throughout and remains grippy even without additional stippling. Christensen also offers a burnt bronze Cerakote version with green and tan colour tones too.

The length of pull measures 13.5”, but the recoil pad is screwed in position so spacers can be added. The recoil pad dampens the recoil effectively, showing a medium/soft texture.

The slender comb fits under your cheekbone but isn’t particularly tall, so in terms of scope alignment, doesn’t offer much cheek weld for large scopes without something like a cheekpiece bag added.

I shot conventional copperjacketed lead ammunition as well as solid copper alternatives in both controlled expansion and varminting projectile styles. I found the rifle inviting to use, with a predictable trigger and the ability to shoot close groups straight from the box. It’s clear to see from the results that the Christensen exceeds its MOA guarantee. The 90º bolt lift and associated mechanical advantage offer minimal positional disturbance to the rifle through the reload. Plus, the light recoil makes it an easy gun to shoot, with a fast return to the target aim point. The light barrel heats up quickly, but I judged 3-round groups were appropriate for a hunting-oriented rifle anyway.

The RCC moderator weighs 381-grams and it cut even more recoil and associated blast/lift, with excellent noise reduction. It made the gun even more appealing and appreciably calm when shot from quad sticks, allowing good impact visibility.

Like for like, short barrels fundamentally offer less expansion space for the burning gases, yet this one retained muzzle velocities close to published figures that are usually measured in longer barrels.

The lapping and internal finish also accumulated very little fouling once run it. It was easily cleaned to a satisfactory consistency every 20 or so rounds. I rarely clean relentlessly to bare steel on hunting rifles! Christensen publishes barrel run-in instructions on their website, and it is worth following the procedure if you don’t have your own ‘style’ already. This rifle was brand-new, so it was nice to get a box fresh item, as many review guns are already well used before they reach me.

Christensen’s rifle is a nice option for any shooter wanting a light gun. It has brand exclusivity, yet doesn’t seem unreasonably priced given the stainless-steel construction, composite stock and Cerakote finish. This last factor alone gives the rifle looks beyond its price point because it has been done without too much artistry, yet it softens the rifle’s otherwise utilitarian looks.

Fast and smooth bolt operation, plus the fantastic trigger, highlight errors that are quite obviously those of the shooter, not the rifle. A Picatinny rail makes scope mounting very simple and the calibre range is versatile, although it’s a shame that .223 is not offered.

The forend is satisfactory for a good grasp, without any fingers or thumbs touching the barrel. Being stiff enough for bipod or other supports, it gave confidence in the gun as a hunting tool for use in all kinds of shooting/support positions. It’s balanced correctly, neutral with the brake and slightly muzzleheavy with a moderator.

However, the length of pull was a bit short for me. The grip is quite slim and I would have preferred a bit more meat to it, but this is a lightweight rifle at the end of the day.

The fact a true left-hander is available opens the order books to many prospective buyers on a rifle whose overall manufacturing standards are hard to ignore. Lastly, you can’t lose the magazine and I think it’s a refreshing balance to find a no-nonsense rifle with not an ounce of excessive form preceding reliable function.