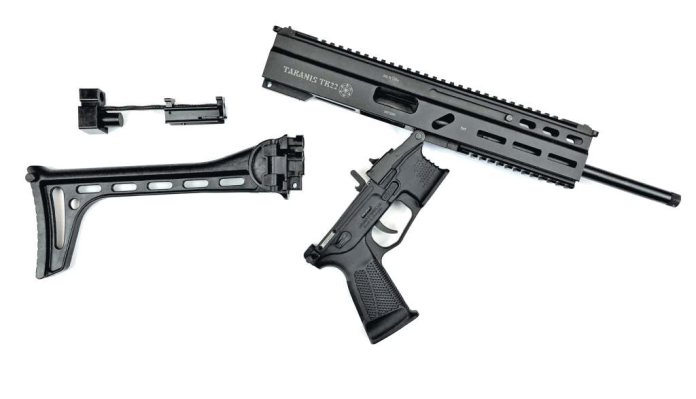 As you may or may not know, I am a massive fan of .22 rimfire guns, be it bolt actions, semi-autos or long-barrelled pistols (LBP’s). Mainly because they are cheap as chips to run! So when I got the chance to test the Taranis TR22 from Grand Power, I jumped at the opportunity.

Now, I will mention that I’m an AR platform fan and I think the Smith & Wesson M&P 15-22 always sets the benchmark for reliability when it comes to semiauto rimfire rifles. Mini-rifle shooters generally go for the AR platform as it is simple to use and there are tonnes of upgrades available. Yes, they are fast to use as far as reloading and pointability are concerned, but probably the fastest semi-automatic .22 LR I have seen in action was a Ruger 10/22 race rifle used in a ‘V’ drill competition. It was literally bare-bones and minimalistic with a skeleton stock, short barrel and super lightweight accessories. I think that the Taranis is somewhere in between and may just appeal to those who want something a little different from the normal guns that we see at the range. Could it be a competition gun? Yeah maybe, as it is very manoeuvrable with easy controls and it can be shot pretty fast. Not much in the way of upgrades though.

The stock is all-polymer, very minimal and shows no adjustment, plus it is non-folding. Interestingly, the TR22 has an upper and a lower just like an AR and breaks open in a similar fashion. The lower is also polymer while the upper is aluminium, giving the gun a very solid feel.

The lower has a very nice feel to it and has the same profile as an AR, but does not include the option of being able to swap out the pistol grip. However, saying that, I do like the one you get which has plenty of grip moulded into it, plus it is comfortable.

Above this pistol grip is the ambidextrous safety catch which is similar to a 15-22. The trigger guard is moulded into the lower and is big enough for a gloved finger, while the blade shows a textured finish. In use, the trigger is pretty good and proved predictable.

The magazine well is part of the polymer lower and shows an ambidextrous release catch positioned so that it can be easily manipulated with the trigger finger. When depressed the mag drops free. On the outside, the well has a similar textured surface to the pistol grip and offers a comfy place to put your hand, depending on how you wish to hold the gun.

The handguard is not separate to the rest of the upper like on an AR. Instead, it is one solid piece of aluminium, and this is what gives the TR22 such a solid feel. There is a 6” section of Picatinny rail underneath to attach accessories to, plus three M-LOK slots on either side giving the user even more options for attachments.

The cold hammer forged barrel protrudes about 5” from the front of the guard and is threaded so that a moderator can be fitted. The charging handle is positioned at the top of the handguard and can be swapped to either the left or right-hand side, which is a nice touch.

The receiver includes a Picatinny rail which almost extends the full length of the handguard. This provides loads of room for either a red dot sight or a scope. The gun does come with iron sights as standard which are very good. They are quite subtle, well, the post and notch ones are but you can flip them up and change them to a rear dioptre style one and a white guarded post at the front. Unfortunately, they are not adjustable.

Thing is, you are probably going to attach an optic of some description anyway!

So how did it perform out on the range? Well, very good! Out of around 400 - rounds, I only had two, maybe three, failure to feeds. To be fair, that is good going when it comes to semi-auto .22’s, plus it was a brand new gun!

I set up several sets of steel gongs at various ranges from 20 to 60 yards. Loading of the mags was nice and easy, especially with the easy load tabs that you can pull down. With 25 rounds loaded and you are good to go!

The slightly flared profile of the magazine well is comparable to aftermarket types and made inserting the magazine easy. Pull back on the charging handle, then release it and the gun is now hot. The safety catch is positive and can be upgraded to any AR safety if required. The trigger was nice and crisp although a little heavy for some. For a gun of this type, it was fine for me.

I mixed and matched various brands of ammo with assorted mags of standard and high velocity, the Taranis spatt the lead out with no issues. In fact, the more mags that I put through it the better and smoother it seemed to run. Last round hold open is a nice feature and for the price point of this gun, it’s to be expected.

All in all, I think the TR22 is a great little gun. It is solidly built and so pointable. Its compact profile will really appeal to some who want something halfway between an AR and an MP5 clone. Safe shooting! Rack.