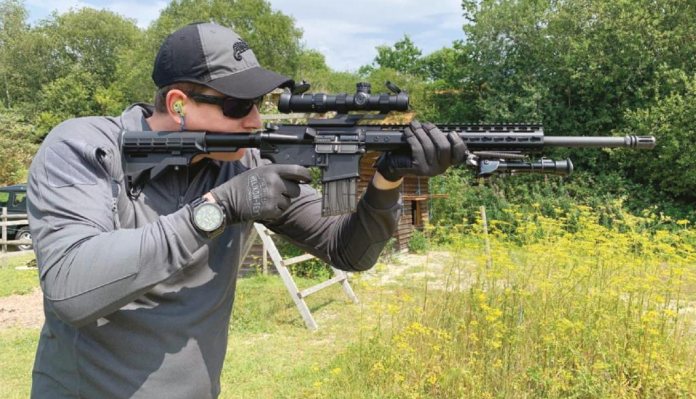 So, why would you want a 22 Magnum (22WMR) AR15? Well, I can think of a few good reasons. After the 1988 centrefire, self-loading rifle (SLR) ban, the only semi-auto rifles allowed were those chambered in .22 rimfire. This put the 22WMR in a unique position and one with some possibilities. Hunting aside, what about a high capacity, practical-type rifle, capable of taking the game out to 250-300 yards and maybe a bit more? However, back then, 22 semis were seen as more fun guns.

After the handgun ban, people started looking at 22 semi-autos more seriously for action shooting. This led to a host of military-looking, hi-capacity types chambered in 22 Long Rifle, mainly based on the AR15, which are massively popular today. Again, the view from some was, what about a 22WMR option, as being more powerful they could offer a sort of mid-range practical use. It was not until 2016 that I tested the first 22WMR AR15 from NWCP that used a Ray Vin, side-cocking upper and ran on the Black Dog, 14-round magazine and it impressed.

Enter Rob Chapman (Gun Craft Ltd.) who has been working on a 22WMR AR for a number of years and his company already offers straight-pull ARs and custom builds. As you might expect, it’s very much a standard A2-type, the upper receiver is flat-topped with a Picatinny rail, along with a case deflector hump, functioning forward assist and ejection port cover. The lower shows the standard (military) fold-down (winter trigger) guard base, with the safety on the left above the pistol grip, which flips from 9 O’clock (SAFE) to 12 O’clock FIRE. With the manual hold open catch forward of this and the magazine release on the left of the well, in easy reach of your trigger finger.

The rear configuration is that of the CAR15, with a buffer tube that supports a 6-positon sliding butt of the Rock River Arms style; basic and rattley but it works! The A2 pistol grip is serviceable, but there’s better. So far, a very standard build spec, however, moving forward we see a slim, 12”, K-Mod, free-float forend tube with full-length Picatinny rail at 12 O’clock, covering an H-Bar-style 18.5” barrel from Sassen Engineering (Border Barrels re-birth). Twist rate is 1-14” and the muzzle is threaded ½ x 28 UNEF and fitted with the A2 flash hider/muzzle brake. Feed is from Black Dog’s 14-round WMR magazine.

The trigger is typical AR, with that horrible out of the box, 2-stage military-type pull, that does not promote good accuracy. Rob said they fit a JP reduced weight spring kit, which did not seem to make a huge improvement! Being an AR15, the world is your mollusc when it comes to accessorising! Personally, I would bin the butt and pistol grip for something better from Magpul. I’d also fit an ambi safety catch and a decent drop-in trigger pack.

The bolt system is simple and uses a heavy, full-length body to keep the blow-back action shut on firing, with return power being supplied by a spring and buffer in the butt tube. Done doubtless, as the 22WMR generates a lot more energy and pressure than a 22LR, which can get away with a lighter, drop-in bolt assembly. Timing was good, as I couldn’t detect any gas blast on my face as the action opened. I did some slow motion photography and it was interesting to see the bolt bounce off the breach face as it went into battery to chamber the cartridge, before finally closing.

Being a rimfire using a Black Dog mag in a centrefire AR15 chassis, compromise has to be made on one of the features of the generic AR I really rate; the automatic, last round hold open. This locks the bolt open, sets the release catch and all you do is slap in a new mag, press the button and you’re away. Instead, you get an ersatz system that stops the bolt going forward by blocking it with the risen magazine platform. It works but slows down the reload and makes it more cumbersome. Also, as I found with the Ray Vin gun, the platform takes quite a battering and can round off after a time. Rob told me he is working on a new design that should give full function for the future. However, the hold open catch can be operated manually, so you can show an empty chamber on the range with the mag out.

The most noticeable aspect of the rifle is its forward weight, which is down to that big, H-Bar tube. Unlike most barrels of this type, it’s not fluted to reduce weight. Rob said that’s how they come from Sassen and yes fluting could be an option, but it would put the price up.

Operationally, and apart from the hold open, this is a standard build and I really like it and as an AR15 freak would love one in the full, A1 or A2 military spec. At the risk of sounding pedantic, I wish Rob had given the rifle a name as opposed to a title. It came fitted with a compact, 1-4x24 TAC-30 scope from a company called Chassis systems, with easy to dial, 1/2MOA turrets and a combined horseshoe and BDC ladder reticle that’s fit for purpose. Also, a K-Mod QD stud adaptor and bipod. For accuracy testing, I fitted a Primary Arms GLx4 6-24x50 FFP scope, a bit OTT agreed, but I wanted to see what it could do. Initial testing showed the trigger was well under par, being long and heavy and I had to measure groups in two axis to get an idea of ability. Given the ammo, this ranged from 1 x 0.5” to 2 x 1” at 100m. Not a fair test I would admit. However, and like a lot of shooting, it was much easier to hit a single mark than put up a group and I was smashing shards of clay pigeon reasonably easily at the same distance. Taking ammo quality into account, it was a good one inch gun. However, on a second trip to the range the rifle now wore a drop-in, 4lb trigger pack, which proved my supposition about its inch, if not better ability. If you go that route, I would caution you to get some anti-walk pins, as the originals will not be retained against side-float with the new mech. Or tape them over on the lower receiver sides.

Ammo consisted of Remington’s 33-grain ACCUTIP-V (AT) and 40-grain PSP (pointed soft point), Hornady 30-grain V-MAX, CCI 40-grain MAXI MAG hollow point and Winchester 40-grain jacketed hollow point. I also had some of their 45-grain lead hollow point sub-sonic, to see if it would function a semi-auto, which it didn’t, so it was discounted.

I had a few feed stoppages, mainly with the Winchester JHP, due no doubt to its big, soft, lead hollow nose; as I recall, the Ray Vin did too and never liked this one. However, after about 50, assorted rounds the rifle smoothed up and fed everything with acceptable reliability. This may sound daft, but the extra kick and power of the 22WMR made me feel I was shooting a real 223 AR and not a rimfire, others commented on this too. So, what figures did I get; see Magnum Ballistics? Please note, groups printed were achieved with the standard trigger, as I was having so much fun, I banged off nearly all the ammo on the first testing. The 1” groupings using the drop-in trigger were achieved with the 33-grain Remy ACCUTIP-V, but as can be seen, this is still a marked improvement that would doubtless be seen across all ammo types. It’s also interesting to note that with the exception of the Winchester JHP, all other loads were faster than the factory quote.

Great rifle but consider my thoughts. Price is high and it would have been good to get a second magazine included, and it needs a better trigger and probably furniture, all of which will require more outlay. For most Action-type competitions, set up for 22 LR semis at sub-100 yards, it offers few real advantages, plus ammo costs more. Where it would shine is in longer range rimfire shooting or pest control. I’d love someone to come up with a Practical Rifle type event set up for the calibre, as it would rock. Would I like one? YES! Would I buy one? NO! Why? I no longer shoot comps and prefer a bolt-gun for vermin and, apart from the sheer pleasure of ownership, I’d only shoot it on the range turning live into empty, which would get old quickly. However, for the more competition orientated shooter, it could be a big hit and, more importantly, get 22WMR established in its own slot and give us more variety.