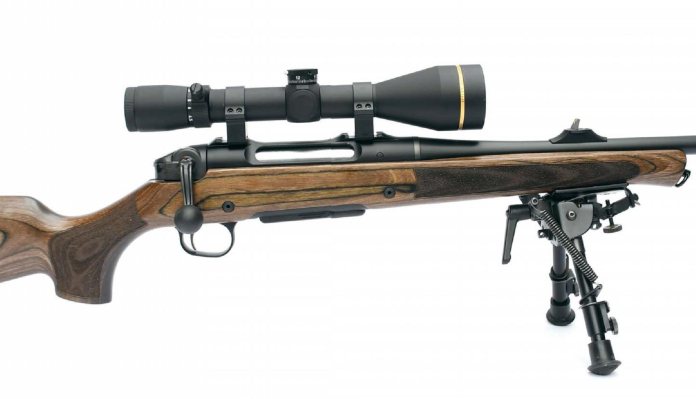 The NTX shows a 20” barrel ending at its 18mm diameter muzzle, with a capped 15x1mm thread and deep blacked matt throughout with no specific coating named. The blade-type front sight is removable for thread access and adjustable for elevation and shows a red, fibre optic bar. And designed to align with the rear U-notch, which is surrounded by three Hi-Viz green dots for a fast and instinctive line-up, it also adjustable for windage.

The stock is a birch laminate, and externally finished with a matt look in brown and long-term atmospheric stability. The barrel is fully floated with no intermittent contact issues and a sling loop terminates the semi- Schnabel tip with similar at the butt.

Visuals aren’t far dissimilar to stained walnut and intrinsic grain pattern looks great. Stippling is applied to the forend and pistol grip that offers an assured and tactile feel and minimal ‘shine’. It feels, tough for a hunting rifle and balances aesthetics and mechanics. The comb is reasonably tall, close under the bolt and straight to the recoil pad, ideal for the iron sights, but as do most rifles, could benefit from a cheek riser for scope use. The solid recoil pad is 12mm thick with stippled grip into the shoulder completing the generous 14.75”/375mm length of pull (LOP).

Haenel show a 45mm bolt handle with 25mm polymer ball, that pivots rearward, in a linear motion rather than up and down. It may take a few seconds to get your head around it, simply put, the bolt handle pulls 110mm straight back to its stop before returning forward, to feed, chamber and lock. However, although locked it won’t fire, as it needs another 15mm of forward movement to cock the firing pin.

Whereas Blasers and Merkels have a separate de-cocker, the Haenel uses the handle only. Further controls are actuated by the shroud’s rearmost crescent shaped rocker, with two wings either side and the shooter is aided by pictograms. With the rifle closed and de-cocked, push the left wing (white bullet with an arrow pointing towards you), as you pull back the bolt handle for safe opening. This is smooth and ergonomically intuitive. If the bolt’s closed and un-cocked, push the right wing forward and the bolt handle is locked and totally inoperable and cannot be cocked (white bullet with X). In the middle is fire (red bullet with arrow pointing to the target). This sounds complicated but is one of the safest and fastest systems I have encountered!

So how does it function? The underside of the shroud (with bolt removed) shows bevel gears that cause the bolt shaft and connected head to rotate in the familiar fashion of a three lug, 60, turn-bolt action. Unlike a bolt carrier design, there is no need for additional length/bolt travel to initiate head rotation. At the rear, the rotationally stationary shroud projects a stud form, it’s face bearing onto the rear of the conventional front locking action to enforce primary extraction with absolute ease similar to equally effective specific Blaser and Savage Impulse mechanisms.

The trigger is a single-stage unit, not advertising adjustability, but shows grub screws without copiously smeared threadlock all over the show. This one broke crisply at 600 grams within the bottom metal’s spacious guard. The magazine shows a twin column polymer build, with a 5-round capacity and fills easily in or out of the rifle, which is a good feature. Not being metal, means it’s kinder on your ammo too as it won’t scratch it up either.

A push button release catch in front of the mag well deposits it into your palm and it gently slides free, the tolerances and overall profile are ideal for hassle-free operation without undue noise in either direction. Another plus, it never jammed during insertion. Finally, if you don’t want to ever lose the mag, the release button can be moved sideways to lock it in place, Mauser did a similar thing with their M03 and it is a useful feature. It of course means you have to top load the action, which is no hassle. The final factor is because ammo feeds smoothly and extracts/exits similarly without requiring brutal bolt force or speed, the rifle is quiet in operation which appeals to some shooters, certainly me!

The rifle performed without fault at the range, shot from the bench with a heavy front rest and rear elevation control bag, rather than my usual bipod setup. Hornady’s 150-grain, SST leadcored ammunition was used along with their 165-grain Superformance GMX non-lead to assure future confidence. Shooting highlighted a crisp trigger, butter smooth, quiet and effortless action cycling, without any bullet meplat damage from the magazine or feed ramp. This is not to be dismissed, some guns need speed and fluidity to chamber a round, here I was unable to make it jam, fail ejections or even get the bolt to stutter from deliberately clumsy operation during any phase of its cycle.

Twin Weaver bases are integral to the action’s steel receiver bridges, which makes scoping up a lot cheaper with standard rings (Blaser take note). I used a modest 3-9x Leupold VX3 hunting scope. 30-06 recoil levels were linear through the quiet laminated stock which are durable, but denser than walnut with less intrinsic damping. They also don’t resonate with a hollow echo like some synthetics.

It’s a while since I spent a day shooting a relatively light 30-06 without a moderator, and pain, but it was more than tolerable, if not well behaved. The recoil pad does a good job and without a hard cheek weld, suffers less noise and vibration transfer into the skull. It’s a little jumpy from the bench without front hand in place and like the true sporter it is, shooting from sticks and improvised positions is where this gun really performs. Balance is ever so slightly toward the muzzle with short stout barrel and long stock offering delightfully intuitive pointability.

I liked shooting with the open sights too, not for groups, but to enjoy the fast fire functionality ‘in shoulder’with reloads performed smoothly causing little sight picture disruption. These are somewhat a hallmark of the European origins of the rifle, but with simple removal possible, no detriment at all to the rifle from a market where legal changes now make the addition of muzzle mounted accessories far more common.

I only had the rifle for 72 hours, so had to compress my usual review routines so endless ‘groups’ to impress on paper were not a priority. I had given the barrel a good clean and that showed up no problems. I used six rounds for zeroing and a bit of feel assessment which were followed by initial 3-shot groups of exactly 25mm at 100 metres, which is technically superior to the common M.O.A. assurance from realistic manufacturers in no control of shooter ability.

The 150’s continued to hold this standard, so I moved to the copper. I didn’t have the opportunity for a reclean so ‘treated it mean’ and carried on shooting into the 100-metre target, probably like any hunter/buyer is likely to do. The first three were forgettable, stringing vertically into an 80mm group which might alarm most shooters, but I persevered, knowing the barrel was no different, likely just needing acclimatisation for a few rounds to a different metallic interaction.

Unsurprisingly, the next group was the magic 25mm and further shots ebbed and flowed accumulating an aggregate without any significant flyers of 28mm centre to centre, returning to same point of aim/impact as the previous zero 150gr lead zero. Speeds were about 100 fps below the advertised values, but I was entirely satisfied with an 11mm group to finish up, there seemed no further need to punch paper.

I would also say this was from a portable bench, not my usual fixed unit. 165’-grainers are ideally matched to 30-06 speeds and with an 1-11” twist barrel, well specified for slightly longer, less dense copper ammo producing 2830fps for 2935ft-lbs. I didn’t have any access at the time to 178gr Hornady ELD-X “Precision Hunter” but this has time after time suited many 308’s and I suspect a well matched 30-06 loading too. The rounded forend underside was hand filling and easily restrained, if perhaps not quite as stable from sticks as a flatter unit but I’m really trying to find reasons now.

I rather liked this rifle, first impressions, typically, when seen in photos with a brief ,gun show interaction did not do it justice. However, when I got physical and hands-on in the NXT’s natural environment, it revealed gratuitous capability. It’s not just performing adequately; it has that dynamic artistic fluidity yet still coupled to genuinely ingenious design mechanics and operation without tripping over its’ own ‘cleverness’.

Perhaps most importantly to me, truly capable engineering design, without any sign of the marketing department writing the rulebook. I go easy on the superlatives, but this rifle ranks highly as one standing apart and perhaps most of all, it’s not even that expensive compared to its peers. I hope it becomes successful and generates more chambering options as well as a left hander. In my opinion, it’s a deserving candidate with a bright future, I would happily carry one and will likely stand high in my ‘products of 2022’, because it made me smile when tracking moving targets, firing, and reloading. It got me right in the mood for boar, plus I’m a closet 30-06 lover anyway.