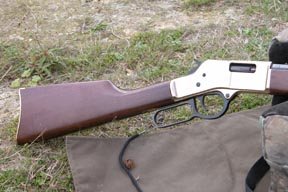 In terms of firearms history and development the name Henry is a big one, as they introduced what is probably the first practical lever-action design with their 1860. This went on to be acquired by Winchester and with a few modifications became the 1866 and as they say the rest is history.

However in recent years the name of Henry Repeating Arms has re-surfaced and most British shooters will know of them for rimfire lever-actions. Tube magazine rifles have never been that popular in the UK, certainly in comparison to the more accepted /gun-reviews/firearms/bolt-action-rifle”>bolt-actions and semi-autos we tend to favour. But now Henry have added another string to their bow with what they say is the first centrefire rifle to bear that famous name since 1860.

The rifle is called the Big Boy (I dare you not to laugh) and proved to be a well made lever-action with a fair bit going for it. The design is eye-catching with its brass receiver, again reminiscent of the 1860 model, though sensibly they have included a forend. But they have taken a similar route to the original for loading as we shall see.

The Big Boy, as the name implies, is the centrefire/pistol calibre option offering the choice of 357 and 44 Magnum and 45 Colt chamberings. There are also a number of versions, all identical in build just differing in finish/decoration, with the Special Editions and the Engraved. Importers (Viking Arms) sent me the standard model in 357 Magnum, which will also handle 38 Spl too. In truth, for the UK, that’s all you need.

First impressions are of a solid and heavy design as the gun tips the scales at 8.68 lbs, most of this coming from the big, octagonal 20” barrel. This gives a distinct, nose-heavy feel, which certainly aids control. Twist rate is right hand and 1-38”. The brass receiver is closed topped and features an ejection port on the right side. Locking is like the Marlin 1894 with the round bolt being engaged at the rear by a rising lug, the hammer only offers a full cock position and there’s no separate safety catch. So very much a case of cocked or not…

To compliment the action the butt plate and barrel band are also brass, with the hammer, operating lever and trigger blade blued as are the barrel and mag tube. Sights are traditional with a Marbles-style, semi buckhorn rear with white diamond below the V-notch and a brass-tipped blade up front. The receiver is not threaded for an optical mount, but Henry use the same system they offer on their rimfires, with a cantilever base that locates onto the rear sight fixing. This is extra and not included with the Big Boy series, unlike the .22 LRs and 17 HMRs.

Where the Big Boy really differs is in the loading system, as you may have noticed it has no loading gate in the side of the action, unlike a Winchester or Marlin for example. Henry have kept it very much as the 1860 though they don’t use a swing-off muzzle trap, but have simply enlarged the rimfire filling system.

Here you unlatch the brass spring/follower and pull it forward to expose the port in the underside/front of magazine tube. Now just slide the ammo down (base first) to fill to capacity, in this case 11 in 38 Spl and 10 in 357 Magnum. I can’t make my mind up over this as it’s marginally slower and doesn’t allow for top ups as you go, but it’s simple and reliable. One thing I would say though is to keep the barrel at a shallow angle when loading and don’t hold the muzzle upright and drop the ammo down, as one high primer could cause a detonation. But that’s just plain common sense anyway…

I used Privi Partizan (PPU) ammo with 158-grain lead semi wad cutter (SWC) in 38 Spl and the same weight but in a fully jacketed, truncated cone (T/C) 357 Magnum. Henry have wisely made the magazine tube catch a bit on the stiff side, so there’s no problem with it unlatching under recoil and flying out of the front as I have seen some rimfire tube systems do. They have also provided a generous length of knurled head to get a good grip with your fingers to do the job.

Loaded up and with the sights set from the box, the Big Boy proved it could shoot. At 100 yards either calibre was dropping the rounds into a 2x4” rectangle with ease. Others who shot it commented on its accuracy potential too. With a scope fitted I have no doubt this would be a 1” rifle.

Feed and function was smooth, easy and 100% in the longer 357 magnum, but showed occasional hesitation in 38 Spl, which is not uncommon due to the action not preferring the slightly shorter cartridge overall length (COL) of the 38s. Where this my gun I would reload using 357 cases but with a 38-type powder charge to improve economy and reliability.

Mechanically the Big Boy is a good and reliable rifle with excellent accuracy potential. I didn’t personally care for the brass look and though I did not initially like the loading system, it actually proved as efficient as a gate-type and a lot less harder on the thumb too. With the ability to mount a scope over the action the Henry could well appeal to those looking for an alternative to the current crop of lever-guns for club/action-type shooting. With iron sights it could be just the thing for Cowboy Actions shooters too.