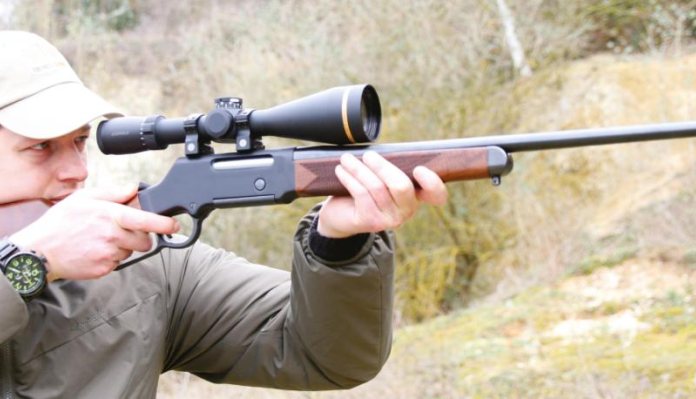 Looking back over my shooting career shows quite a love affair with leveraction rifles and I reckon I have owned pretty much most makes and models in many different calibres. A newer name in this area is Henry Repeating Arms, who build a series of more traditional looking lever guns, all with a forward-filling tube magazine in a range of pistol and rifle calibres from 22 Long Rifle to 45-70 Government. Apart from rimfires, where this sort of build is near mandatory, I could never understand why they did not go for the Nelson King loading gate on the right side of the action, as Winchester, Marlin, Rossi and others do.

It was with some interest I heard of their Long Ranger, a design far removed from the aforementioned rifles and for that matter calibres. The nearest gun to it is Browning’s Leveraction Rifle (BLR), which, on closer inspection it copies. Calibre choice takes the more modern approach, with 223 Rem/5.56 NATO, 6.5 Creedmoor 243 and 308 Winchester.

Generically, lever-actions in the more traditional, rimmed calibres are not known for their longer-range accuracy. I’ve hunted Muntjac with a Marlin 1894 in 30-30 and to be honest, I did not want to push it much past 75 yards due to group size, even with a scope on board. Henry makes a big thing about the Long Ranger being far more capable in this area, and as it has a decent barrel and tight action, given the calibres it’s offered in, I see no reason why not.

What came out of the box was a pleasing surprise. The American walnut furniture was of reasonable quality and nicely oil-finished. The closed-topped receiver is a high-strength aluminium alloy, black anodised, and the barrel nicely blued. You get the option of a plain barrel or iron sights and the top of the action is drilled and tapped for Weaver-type bases, (included). At 7lbs un-scoped, it’s a solid piece. The 6.5 Creedmoor excepting, which has a 22” tube, the other three calibres all show 20”. OK for 223 and 308, but a bit marginal for the 243 in terms of energy generated. I would stick my neck out and say larger deer legal at 1700 ft/bs might be a stretch in that one! Twist rates are 1-8 6.5, 1-9 223 and 1-10 243/308. My tester was in 223, which for the UK, makes it a varmint and small deer gun only.

The woodwork shows a high, straight comb that drops down to a long slim, straight-hand grip, at the rear is a thick rubber recoil pad. The half-length forend has a steel end cap and both grip and sides shows laser-cut chequering panels. QD sling studs are fitted front and rear, the former is right on the end of the cap, so not really an option for bipod mounting. The chromed bolt is gear-driven and consists of a 6-lug, rotary head in a long carrier, like the AR15 is cammed in and out of battery as it reciprocates. Operation is by a gear wheel or quadrant on the internal section of the lever that acts upon a toothed rack on the underside of the carrier, identical to the BLR system.

There’s no manual safety, or the more traditional half cock position, which allows you to carry the rifle with a loaded chamber but the hammer out of engagement with the firing pin. Henry approach this problem differently, as they use a trigger-operated transfer bar, as do the rest of their centrefire lever-actions. Here, and unless the trigger is pressed and held back for the shot, the bar cannot rise to allow the hammer to transfer its energy to the tail of the firing pin. Letting go of the trigger immediately disengages the bar, making the rifle instantly safe.

So, a loaded chamber/hammer down carry is possible, though I would caution carrying it with the hammer cocked. Yes, you have to press the trigger to release it and set the mechanism, but even then, it’s not best practice, as accidents can happen. On reflection, for an external hammer system like this, Henry’s approach is more than adequate and also addresses the times when you might be shooting in heavy gloves and could not easily disengage a more traditional manual safety.

Feed is from a detachable box magazine, with the release button forward and under the front of the ejection port on the right side of the receiver. Capacity is five in 223 Rem and four in the other three calibres. Compared to a tube magazine, which is slow to load and unload and also requires checking to make sure you’ve got all the rounds out, the box mag is far more efficient, safe and practical. Plus, if required, it’s easy enough to throw a round through the ejection port and chamber it if you run out of ammo and need another shot. I used to own a BLR in 300 WSM and comparing it and the Long Ranger shows that, in terms of operation, there’s little in it.

The Weaver bases are close together, and with only 2.75” between their centres, does not leave much room for manoeuvre when setting eye relief. A far better solution would have been a one-piece rail, slightly raised to clear the hump at the front of the receiver, it could then be longer and offer a deal of leeway in setting up. The 14” length of pull does not alleviate this for those of us with longer arms. As it was, I had the scope’s saddle butting up against the rear of the front ring, which, even then, caused me to move my head back a bit too much.

I also found the magazine release button quite stiff, which required two hands to remove the clip; one to hold the rifle and operate the button and the other to pull it out. On external hammer guns like this, the lock time (dwell between pulling the trigger, the hammer falling and the round igniting) is longer, so you need to be spot on with your technique as to sights and hold as the shot breaks. For this sort of system, pull weight and feel was surprisingly good. The break showed a hint of creep, then it went at a soft 3-4 lbs.

If you’re not used to a lever-action mechanism, you also need to ensure that the operating lever is fully closed and tight up against the underside of the grip, which holds for any design like this. If not, you can have reliability issues. On the plus side, there’s little disturbance of the firing position, as you’re not really letting go of anything and, with practice, you might be surprised as to how easy it is to shoot fast and accurately.

I shot off the bench supported, and the rifle impressed me! Primary extraction was fine, and the action closed and locked securely and easily. I was not expecting miracles on the accuracy front, and again the Henry proved me pleasingly wrong, nailing some impressive 100m groups, as we shall see when referring to the PERFORMANCE CHART this was very much down to bullet weight, type and load. I thought the reload would have shot better as it’s a ½” round in both my 223s. The RWS as usual performed very well and would make a nice small deer and fox choice. The MAGTECH is very much a military ball load based on the original, American, M16 M193 spec, so paperpunching only in the UK, but good enough for that.

With the positive performance of this calibre of Long Ranger I’d really like to try the other variants! Whether or not a 223 Rem lever-action will make it in the UK remains to be seen, as we tend to favour bolt-actions for hunting. I feel major sales will come from the 243/308 Win and 6.5 CM guns, as in 30 cal it would also make a nice pig/deer rifle and, in 6.5, great for deer.