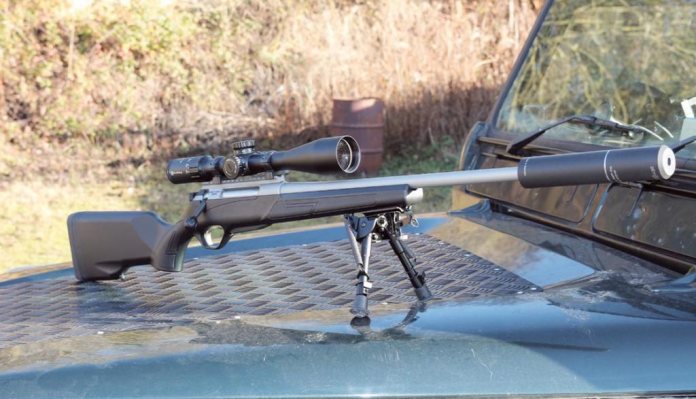 I first tested the original Lithgow Arms LA101 Crossover in 22 Long Rifle back in June 2015, and it did impress. Built like a fullbore, it was a modern design that was, as the name described, a practical hunter with high accuracy potential! In truth, it was a bit big and heavy for a rimfire but you could forgive that easily. In truth, if I retire my Ruger M77/17 All-Weather, an LA101 in 17HMR will be its replacement!

This Australian company has been drip-feeding new models slowly over the last two years, with a 22 Magnum followed by a 17 HMR and tantalising rumours of a centrefire! Well, it’s here and has been worth the wait. Called the LA102, it’s a near identical build and scaled up in areas like the bolt and receiver, as we shall see.

A recent conversation with importers Highland Outdoors confirmed one of the first 308s in the country would be coming my way; yes! Build shows the familiar cold hammer-forged 22- inch barrel in a medium varmint weight; threaded 14x1mm with a muzzle protector. A closedtopped receiver, in this case with a full-length Picatinny rail, all covered in Cerakote Titanium finish. Stock options go to a black synthetic, with adjustable length of pull (LOP) from 338 to 358mm, with two removable 10mm spacers and integral trigger guard. Plus, fixed length (348mm) in walnut and laminate options, all with a decent rubber recoil pad. The layout goes for a full rectangular forend that free-floats the barrel, a long angled pistol grip and a square and deep butt with a minimal gripping hook. Three QD sling studs are fitted with two in the forend. Weight differences between plastic and timber are 3.5 and 3.7kg accordingly.

The bolt obviously differs from the rear-locking rimfire unit, with a big, solid, body and three large, forward mounted lugs, giving massive integrity and a low, 60° lift angle. The handle angles back slightly with a synthetic knob. The safety is a 3-position lever located on the shroud as follows – forward FIRE, middle Safe locked bolt and rear SAFE with bolt operation with a cocked action indicator at the base.

Though you could argue that the above three calibres do it all for the UK, which they do, I would have liked to have seen a bit more choice. The action looks long enough and is certainly strong enough to handle 30-06 and 300 Win Mag or similar, which would give the rifle a more general appeal; especially if they extended the barrel to 24-inches. Who knows, that might be on the cards! However, what is really nice is that Lithgow make the LA102 in a dedicated left hand version too and at no extra money; nice one, cobbers!

I’m always keen to see what provision designers have made for bedding etc. Inside the synthetic stock shows aluminium pillars with a separate recoil lug in its own pocket. Unusually, the centre section has been profiled to accommodate the threaded section of the barrel reinforce at six o’clock! The forend is cross braced for rigidity and the whole build looks like it has been inspired by the Tikka T3; which is no bad thing!

In terms of handling, there’s not much to dislike, as bolt operation is smooth and slick, the magazine inserts securely and ejects easily. The full-length Picatinny rail is an excellent base and the stock is comfortable, rigid and easy to get behind! My one tiny niggle is the safety catch positions; I would have preferred SAFE with bolt operation as the second position and not the third, as that’s how most people will carry it in the field! But hey ho, no big deal either!

Initially, accuracy was a bit inconsistent, so I ran the barrel in with about 40-shots and gave it a good clean and it settled down. My choice of bullet weights very much reflects what would normally be used, the 150s were shooting an inch, which is OK, the 168s came in at .75” and surprisingly the 185-grain Lapua was printing a cool ½-inch. However, that was just three brands I had on hand. I’d probably go with something like a 165-grain reload, which would cover most bases easily. But suck it and see is very much the name of the game, when selecting factory ammo, or building your own.

Even without the moddy, recoil was pretty good for the generally snappy 308 Win and feed and function was 100%. To be honest, there’s not much to dislike about the Lithgow, as it looks good, feels good and has great shooting potential. Hand on heart; if I were looking for a new bolt-action centrefire hunter, then the LA102 would be high on my wish list!