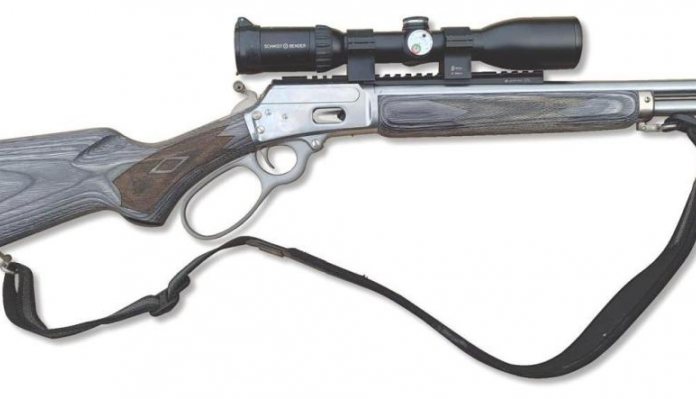 Although my favourite leveraction rifle is undoubtedly Uberti’s exceptional reproduction of the 1873 Winchester, which, and though shootable, is mainly for historical and visual reasons. However, if I was wanting a more modern and practical take on this classic, sideloading, tube magazine genre, it would have to be something from Marlin. I have owned their 1895 in 45-70, which was fun but a little specialised as to usage, so the model for me would be the 1894, which is offered in a range of pistol calibres. However, we must go back into history to see the origins of this great design.

Marlin’s came a bit late to the game, with their first attempt at a lever gun being the 1881, which and like the Winchester 73 had a semi, open frame and ejected straight up and back. This morphed into the 1888, which used the 81’s strut/ toggle-type linkage, although still retained the vertical ejection. The breakthrough came with the 1889 that used the first, closed-topped receiver we see today on the 1894 and later 1895 models. It was said that this build was preferred, as it was stronger all round and stopped the ingress of rain, snow etc. from getting into the action. Today, with the increasing use of compact scopes on lever-actions, it also offers the perfect position for a mount directly over the action. Something none of the Winchester 94s could do, until they produced the Model 94 AE (angle eject) in the 1980s.

Although the 1894 and 1895 are still very much yesterday’s technology, they are still viable firearms and Marlin have taken the traditional blued steel and walnut cosmetics and, along with some new finishes and stock materials, added practical modern features, to give them a new lease of life. They still serve in the hunting and sport shooting arenas, with no sign of going away. On test, is a great example of this evolution; the 1894 SBL – Stainless Big Loop chambered in 44 Magnum and, by association, the slightly shorter and marginally less powerful 44 Special. If you wanted a similar build and spec in 357 Magnum/38 Special, you’d have to go to the CSBL or CST.

The first things that hits you about the SBL is the finish and furniture. All the metal work is stainless steel and the stock black/grey laminate, it looks good and in truth is most practical. This build follows on from their original MXLR that breathed new life into this classic design in the early 2000s. No doubt aided by Hornady who launched their LEVERevolution range of pointed, Flex Tip ammunition to suit tube magazines. These use polymer-tipped, pointed bullets with a higher ballistic coefficient (BC) than, the, up until then, mandatory flat-nosed design for tube magazines.

The butt shows a good bit of girth with a comfortable pistol grip layout and a decent rubber recoil pad. Although and quite common with this sort of rifle and US pump and semi-auto shotguns, the length of pull (LOP) in this case is a bit short at 13 3/8-inches. The forend is equally well built and provides a lot to get hold of, with both pieces of furniture showing some aggressive, but comfortable, diamond-cut chequering. The forend has a metal end cap with a QD sling stud, with another under the butt for a sling.

Unlike its larger brother, the 1895, which is chambered for rifle calibres (30-30, 45-70 etc.) and locks by a rising lug at the rear of the bolt, the 1894 uses a near identical system to the 1881/1888, with a strut integral to the lever that both cycles the action and, when closed, locks the breech. Although the basic layout is all very Winchester 94, with its side-loading gate, the Marlin shows three most noticeable aspects. The closedtopped, side-ejecting receiver is stronger and also offers a place to fit a scope base, along with a cross bolt, hammer block safety; something, as I discovered many years ago, which has to be remembered, as if you forget, you pull the trigger and get a click and a flinch. My problem is that I’ve owned and shot too many lever-actions that don’t have a separate safety catch, so I’m fighting ingrained memory.

The SBL shows a number of what I would term as, standout aspects of design. Most noticeable, is the big loop (BL) operating lever, not a feature I hasten to add inspired by John Wayne, who always seemed to carry a Winchester 92 in all his cowboy films and used it to for operating the rifle one handed. It looks cool but trust me; swinging about 7lbs of rifle around on a lever, is the best way I know to break it! This feature is more about cold weather hunting, as it offers more access to gloved hands and does not appear to slow down operation.

The sighting system is about as modern as it can get for a rifle of this type. Marlin use XS Sights’ XS Lever Rail Ghost Ring WS, which consists of a Receiver and barrel-mounted, lightweight, aluminium Picatinny rail, so allowing the fitting of either a conventional telescopic sight or a red dot. Also included in the set is an adjustable rear Ghost Ring and, up front, a fixed blade on a block that screws to the barrel. The rear unit offers a large, round aperture that is easily viewed, so making centring the blade with a white stripe down it up front fast and instinctive. The ring is removable if required and adjusts by jam screws for windage and screws up and down for elevation.

The medium weight barrel is just 16.5-inches long and has a twist rate of one turn in 38-inches. The 8-round magazine tube stops about an inch from the muzzle and is retained by a dovetail block, as opposed to the more common barrel band. This build makes the SBL a very handy and cool looking carbine, firing a powerful, pistol calibre cartridge. For range use, the only real consideration is accuracy potential, but if you were to take it hunting, then you must also think about UK deer legal energy levels.

For the test, I fitted the SBL up with a Schmidt & Bender 1.5- 6x42 Zenith; compacts of this nature would seem well suited to the sort of use. A hammer extension is also included that makes manipulation with a scope fitted easier. Marlin importers Raytrade UK Ltd. kindly supplied some Remington, 180-grain jacketed soft point (JSP). A bit light, as the standard 44 Mag load is usually a 240-grain of some type, so it would be interesting to see how it shot. On that point, I dug through my ammo boxes and found some quite old, MagTech 200-grain jacketed hollow point (JHP). Its massive nose cavity looked like you could get a pint of soup in there.

Loading is done through a gate in the receiver, meaning you can top up as you go, just push the rounds in. Cycling the lever then chambers the first cartridge and leaves the hammer in its fully cocked position; from here, you have two safety options. First; you can slowly lower it to its half cock notch and, when ready to fire, draw it back. Second; leave it fully cocked and set the safety by pushing the cross bolt right to left, where a red ring shows. I favour the first method, as I find it more instinctive and familiar.

General operation was easy and a fast and firm stoke of the lever fully forward and back ensures reliability. Do not go slow or baby the action, as that is what causes functioning problems. Recoil and control with both loads was acceptable, with none of the bite of a 44 Mag revolver. Ballistics were interesting too; See 44 FIGURES. The 180-grain Remy came out of the trap large deer legal @ 1832ft/lbs, the 200-grain MagTech was significantly lower @ 1381ft/ bs, so good for Muntjac etc. However, its greater weight slightly exceeded the Remy in terms of energy at both 100- and 200-yards.

However, from a hunter’s perspective, I would not push either load much past 100-yards, purely from an accuracy standpoint. I have no doubt either loading would be more than capable of dropping a Muntjac or Roe at that distance, maybe something bigger too!

Although the SBL’s barrel is shorter than I would like for a lever-action, as I’d prefer a 20-inch tube, it still does the business. Given the 44 Magnum was initially a pistol round and probably intended primarily for 6- or 8-inch revolvers, the difference in ballistics is considerable to the rifle figures. The MagTech is quoted at 1296 fps and 755ft/lbs, and the Remington 1460fps and 872ft/lbs, which from a handgun is still very good.

Overall, an impressive rifle in a hard-hitting calibre, whether or not it makes a difference on the range over a 357 Mag is debatable, but in the field, that big old 44 would make an effective shorter range deer and pig rifle.