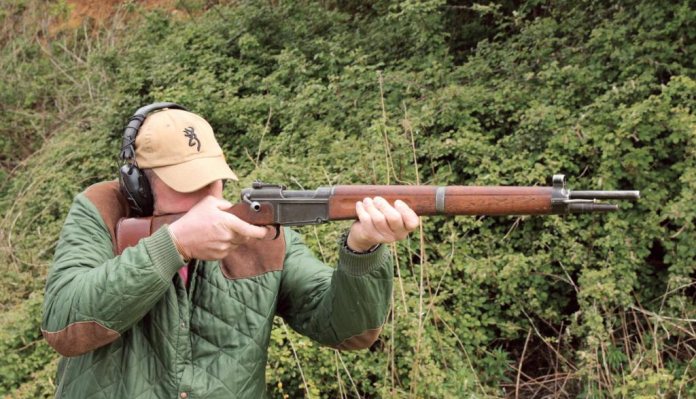 There’s little doubt that the Manufacture d’Armes de SaintÉtienne) Modèle 36 (MAS36) is an outwardly ugly rifle, with a number of unusual features; not the least of which is its obvious and alarming lack of safety catch.

Combine this with its apparent inability to adjust for windage and the odd shaped bolt handle and it’s no wonder many socalled experts feel it’s a nonstarter! But before we condemn this rifle to the junkyard of history, we should look deeper.

From the late 1880s, the French used both the Lebel Fusil Mle 1886 M93 and the Berthier Mle 1890M16 service rifles and carbines. Solid designs no doubt but far from modern in concept, certainly when compared to other rifles of WWI, like the Mauser G98 and Lee Enfield SMLE. However, in 1936, the MAS36 was introduced, which in terms of the previous rifles was a modern and massive step forward in design!

The Modèle 36 is a military bolt-action rifle. First adopted in 1936 by France and intended to replace the Berthier and Lebel series of service rifles. Ironically, it saw little service in French hands in the World War II, but a lot after in their colonies – Indochina, Algeria and Suez. In total, 1.1 million were made, with production terminating in 1952. However, its distinctive lines can be seen in post war French self-loading rifles; MAS44, MAS49 and MAS49/56. Also, though heavily modified, the Fusil modèle FR-G2 sniper rifle.

The 36 was also produced with a folding alloy butt for paratroop use, to make it more compact for jumping with! The 36 is surprisingly short, at 40-inches overall, with a 22.6-inch barrel and a handy 8.2lbs (empty). The butt offers a length of pull (LOP) of around 12-inches, which is most noticeable and probably done so that soldiers wearing great coats and webbing would not have LOP problems. The all-steel build shows a heavy, rectangular receiver, with separate forend and butt attached to either end.

Feed is from a 5-round, floor plate magazine that loads from a charger, with a clip guide in the rear of the action.

The rear-locking bolt handle is bent forward, which was probably done to compensate for the short LOP in terms of cycling the rifle easily from what appears to be a very cramped position. In use, however, it worked out handy enough! There is no safety catch of any type and research shows that troops were trained to carry the rifle with a loaded magazine but empty chamber, only loading when they needed too. I bet that aspect caused some accidents?

The sighting system uses a rear aperture on a tangent arm on the receiver and a fixed blade at the front inside a steel protector hood. There appears to be no provision for adjusting windage, but research shows that the rear sight arm/aperture could be removed and replaced with a choice of 25 options, to allow the rifle to be zeroed at 200-metres at the factory. So, the solider was then issued a pre-zeroed weapon, which they had to get on with! A rather labour and material intensive approach, but in keeping with the tough and no-nonsense nature of a service rifle in general!

Which brings me nicely on to the calibre! It was chambered in the rimless 7.5x54mm French, which was introduced in 1924 and a vast improvement over the old rimmed and severely tapered 8mm Lebel (8x50R) used prior to that date. It’s slightly longer than a .308 Win/7.62 NATO and offers two loadings: Balle C is the standard 139-grain Service cartridge giving 2700fps, which is near duplicated by the Prvi Partizan (PPU) load I used. Plus, there the Balle D, which is designed for machine guns and uses a heavier 191-grain bullet at 2280fps.

Up front, there’s about three-inches of barrel in front of the foresight and two archaic features; a piling hook (for stacking rifles together) and an integral, 17-inch spike/ cruciform bayonet. This sits inside the forend in a steel tube and is unlocked, removed and reversed to fit, which is a clever idea for a service rifle!

There are two sling points – a slot in the butt, much like the Mauser K98, and a ring front /left on the forward band. The forend, much like the Lee Enfield family, covers the whole barrel. It’s not the most elegant of rifles, but like the British No. 4, has a certain no-nonsense look about it, after all, what do you want from a Service rifle; primarily strength and reliability and it has that in buckets! So, looks and quirks aside, the MAS36, as we shall see, is more than fit for purpose!

Like many of these ex-service rifles, the MAS was tatty on the outside, but the bore and action was sound. Plus, it needed a good clean, as they are often preserved in thick grease, which must be removed at least from the barrel prior to firing. The LOP was too short, so I fitted one of Krank’s Leather Slip On Recoil Pads (H4101), which helped. For testing, I used PPU’s 7.5x54mm French ammo.

There were no stripper clips but the magazine loaded easily by hand. Operating the bolt in the shoulder proved easy enough and it was plain to see why they cranked the handle forward!

With the LOP sorted, I shot off the bench at 100m and whoever zeroed this rifle had not done a great job! Set at the prescribed, 200-yard zero, it was shooting about 16-inches low and 4-inches left, which I simply aimed off for and soon was easily hitting standard clay pigeons, so it can still shoot. Recoil was mild, more so than a 7.62 NATO, perhaps helped by the pad! The foresight is a bit thick for precision aiming, but it’s a Service rifle! Over the afternoon I warmed to the MAS and despite its singular build and lack of safety catch, I really enjoyed my time with it!