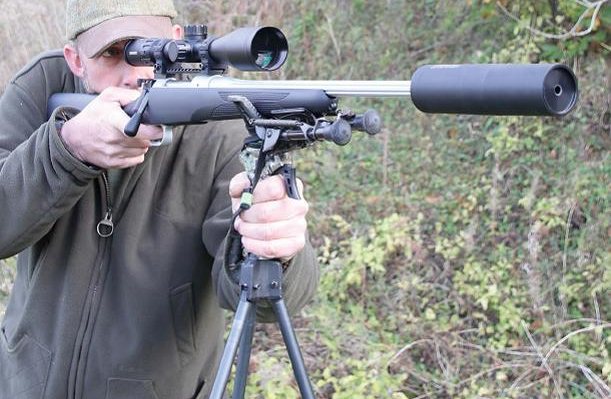 I must admit I do like sensible barrel lengths, for that read on most centrefire calibres (308 Win excepting perhaps) something at least 22” long, otherwise what’s the point? Firing a 30-06 for example in a 20” tube, gives extra muzzle flash and blast with 308 Win-type performance; so just buy a 308! And don’t get me started on 243 Win, probably the worst calibre for short barrels; certainly, for large deer legal energy levels required by UK law.

So, let’s turn our attention to one of my favourite modern rifles, the Mauser M12. This fixed barrel design is a great example of a well-made product in an eclectic blend of old and new styles. Was it not for the fact I own its big brother the Mauser M03, I’d doubtless have one! However, there’s another version of the M12. The Impact is the brain child of the Robert Sajitz the CEO of UK importers Blaser Sporting Ltd. It takes the synthetic (Extreme-style) stock and action mates it to a slightly heavier, fluted 20” tube along with a one-piece, 20 MOA rail. It is offered in 308 Win and 243 Win, but I always thought a bit more tube would not go amiss!

Despite that though, the 308 proved to be a mad rifle in that it shot with near match-like ability (with the right ammo) and out of all proportion to its price and barrel length. Back then I think it cost £1150, though it’s now £1220 and was definitely one to consider. I was talking to Robert that he should consider making options with longer barrels and he said it was not on the cards. Well, that all changed recently, with the arrival of the longer option chambered in two of my favourite calibres 6.5x55 Swedish and 30-06 Springfield.

This model is identical with its extended bolt handle, 20 MOA scope rail and silver, Ilaflon-coated, medium-weight, fluted barrel (later version will be Cerakoted). The only change is the extra 2” of tube that will make the two calibres far more efficient than if they’d stuck with the 20” version. Personally, I’d like a bit more, as my M03 in 6.5x55mm has a 23.5” tube, and using my 155-Lapau Mega reload generates a cool 2647 fps/2411 ft/lbs, which is very impressive for the old Swede. But you pay the price in gun weight, size and more importantly handling and shorter and lighter seems to be the preferred style by many these days.

I also think the racier lines of the longer version will perhaps bring more people to consider the merits of the 6.5 Swedish, a great calibre but one that is not that well regarded in the face of the more modern 6.5s such as the Lapua and Creedmoor. Truth is it’s a lot more versatile than the preconceived idea of many of it only firing a 140-grain bullet at modest velocities. True in the case of the original Swedish M96 Mauser, but as I have proved with my M03 that you can push it hard but safe, which is why I picked it for the test rifle. 30-06 speaks for itself, but it too is not main stream in the UK, but none the less well regarded and a great, one-gun all-rounder.

The barrel is a 1-8” twist, pretty much what’s required for a 6.5mm and shows a slight and gradual taper from its short reinforce from 19.72 to 17.28mm and ends in a 15mm thread at the muzzle with protector. Both this and the action show a tough, silver, Ilfalon finish. As standard on top is a 20MOA one-piece Picatinny rail, and like the M03, a massive ejection port! The long bolt handle shows a synthetic teardrop knob and gives a low, 60° lift angle. I’ve already mentioned the safety, but it’s easily operable by the firing hand thumb, without having to break the rest of your grip. At the rear of the shroud is a cocked action indicator pin with red ring that can be seen in the day and felt in low light.

Feed is from a 5-round, polymer, detachable box mag, which can also be top-loaded, the release button is at the front of the well and recessed and operated easily. The trigger guard can easily accept a gloved finger!

The pleasingly solid, one-piece stock is grey with moulded-in gripping sections at pistol grip and forend, length of pull (LOP) with the slim rubber butt pad goes to 14.5”. The forend is reasonably rigid and offers a light free-float to the barrel, Three QD sling studs are fitted, two fore and aft and another in the tip, so no problem using a bipod. Visually the Impact is a pleasing looking rifle, if a bit bright, and feels and handles nicely being neither too light, heavy or long.

Accessory-wise, I fitted a Harris BRS bipod and Haukson reflex moderator, optics went to a Minox ZX5 3-15x50 scope in Tier One low rings. I have been using/testing this model for a few months now, initially I did not like its free-floating centre dot, but as time passed I started to appreciate its optical quality and features as it offers both illumination and side focus. Plus, at £829 it’s good German quality and ability without breaking the bank! I’ll be doing a full test soon!

Ammunition went to three makes and two of my reloads. Factory; RWS 140-grain, Twin Core, Cone Point, Norma 140-grain Partition and Geco 156-grain round nose soft tip. Reloads; Hornady 95-grain V-MAX and Sierra 100-grain hollow point Varminter, both running on 42.4-grains of Vit N140. I’ve had good success with 120 to 130-grain bullets, as well as 140 and 155-grains with my M03 and it occurred to me that if the rifling twist could support the lighter weights you’d be getting something 25-06 Rem or 243 Win-like for foxing and critters. Plus, 140-grain match-types like Hornady A-MAX, ELD Match or Lapua Scenars give good long-range performance. After all, if the 6.5 Lapua and Creedmoor can do it, then why not the old Swede, as it’s plenty capable as has been proved for many years?

Range testing proved most interesting. I had some old Winchester 140-grain SP just to save ammo and get the scope roughly on and it was shooting ½”; good start. Velocity is quoted as an average figure over a 3-shot string and I’ve also noted extreme velocity spread (ES) and energy in ft/lbs too.

I think I was most surprised at the RWS Twin Core, as I was not expecting either that mad group size or ES. But at only 100 fps faster the Norma was offering a chunk more energy and a solid and respectable inch. A hard choice, as the 0.35” of the RWS means tighter groups at all sensible ranges, but a bleed off in energy. Equally, I was impressed with the two reloads, which were picked at random and ably demonstrate the 6.5’s ability to shoot tight and flat with light bullets, some experimentation is due here, to try and improve things a bit! But the biggest group being a solid and useable inch and the smallest at 0.301” ably shows the M12’s ability to shoot a good cross section of bullet weights and types accurately.

The Impact handled very well, with good bolt operation that you don’t need to force but rather let it slide smoothly. The safety is well positioned and UK-friendly and the feed 100% with a decent capacity and magazine system. The trigger breaks at a sweet and crisp 3lbs! I’m not sure about the need for a 20 MOA rail, I don’t doubt you could push it out to 1000 yards, where a degree of down-bubble is useful. But for most it will be used as a hunter and the top of the rail does restrict access to the ejection port a little, though does not affect the positive ejection. But you must balance that against the rigidity and consistency of a one-piece mount compared to a two-piece! Plus, it’s included in the price, so another bonus! Overall, and at the price, an exceptional rifle, which pleasingly costs no more than the 20” version. Visually, the silver look is a bit bright and would prefer that Panzer Grey Sauer apply to their 100 Keeper, as I like my hunters reasonably subdued. My thanks to RUAG Ammotec UK for supplying the RWS, Norma and Geco ammo and the Haukson moderator.