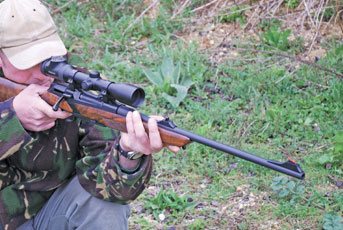 The true, straight-pull action and not the hybrid guns like modified AR15s is best typified by Blaser’s R93 and later R8. Sure there have been other designs like the ill-fated Mauser 96 and Browning Acera. However, another prestigious German manufacture has thrown their hat into the ring and that is Merkel, perhaps best known for its range of combination rifles, shotguns and their KR1 switch barrel bolt-action.

When I say new, the Merkel Helix came out about two years ago, but it’s still new to the UK market, such is our low position on the priority ladder. We are told the idea came from a member of the Abu Dhabi Royal Family - Sheikh Hamed. He wanted to see *a rifle ‘for the 21st century’ - light, easy and safe to use, capable of handling a range of calibres and which could be broken down quickly, without fuss or tools, for easy transport.” So why not a Blaser R93/R8 or Mauser M03 as they fill all the criteria, except they need a Torx key to change the barrel?

I have to say what Merkel came up with is an elegant and efficient design that offers a fast barrel change and slick straight-pull action with some unique features, which looks and feels a bit like their SR1 semi-auto. The aluminium receiver closes in the whole of the bolt with just the drop-down operating handle in evidence. What this does to a greater degree is to allow an uninterrupted head position as you cannot see/perceive the bolt as it’s cycled, so are not inclined to break your stock weld.

The bolt is a rotary, 7-lug design that locks directly into the barrel, which is cammed IN/OUT of engagement by the push/pull action. This movement is surprisingly short and fast with an easy feel and positive ejection. It takes a bit of getting used to as when you close it, it feels you should be pushing it further forward!

Like the Blaser the Helix uses a cocking/ de-cocking lug (kickspanner) instead of safety catch. Positioned at the rear of the action it slides up/forward to FIRE (cock) and by pushing an inset button springs back to SAFE (de-cock). It’s typically hard to operate like the R93/R8s, I’m surprised Merkel bothered as their KR1 bolt-action has a more practical, tang-mounted safety, which is simpler and quicker! Experience shows that this alternative to the more recognised ON/OFF safety is the big deciding factor with the Brits when it comes to buying, as it’s not what the majority like or understand!

The stock is in two parts, the butt shows a 14” length of pull (LOP), medium height, straight comb, with large cheek piece and full pistol grip with a slight R/H palm swell. At the rear is a thick rubber recoil pad. The forend tapers towards the tip and shows an angled cross section, panels of laser-cut chequering are set in the usual places and QD sling studs are fitted. Both pieces of timber partially cover the sides of the action. Typically Merkel offers a number of decoration/finish options including synthetics.

The 3-shot box mag is locked by catches either side of the well and drops free when released, there’s also an optional 5-rounder too. The operating handle is a long, tear drop shaped lever that drops down near vertically with a slight out turn and back angle, and is surprisingly easy to get on to and manipulate. Its front and rear faces are chequered for grip. The trigger is adjustable and offers a soft and light pull, probably breaking at 2-3 lbs and its lack of crispness takes a bit of getting used to, there’s no set function either. Barrel lengths differ with Mini - 20”, Standard - 22” and Magnum - 24” all showing a light sporting profile and some offering iron sights with fibre optic inserts. Calibre choice covers Mini - 222 and 223 Rem, Standard - 6.5X55, .270 and 308 Win, 7X64, 30-06, 8X57 IS and 9.3X62mm, Magnum - 7mm Rem Mag and 300 Win. Mag. Surprisingly there’s no 375 H&H or 458 etc., which other switch barrels offer - makes you think!

Though conjecture on my part, the build of the Helix seems to take its inspiration from a number of earlier designs. The receiver has integral Weaver bases much like the Sauer 202 and does not need specialised mounts so saving money. The barrel slides into the receiver and locks by a lever, similar to the Browning BLR Take-Down. Finally the enclosed action and rotary, straight-pull design is reminiscent of the Browning Acera.

What I particularly like is the calibre/barrel change system. There’s a button under the forend that when pressed allows it to slide off, which exposes a lever on the left side. Pull it down to vertical and slide the barrel out of the receiver. For reinsertion there’s a slot in the side of the chamber that aligns with a key in the chase to aid alignment. Different is the fact that in this position the bolt head comes out with it. This is then rotated to remove it, sensibly it can only go back one way so no worry about the integrity of the action.

Disassembly is quick and easy but I can find no information from Merkel as to how to remove the bolt carrier for a more detailed strip down. Which is not so clever as it makes cleaning the internals problematic, especially with its closed-in receiver. It looks like it’s accomplished by removing the trigger mech housing by drifting out a pin.

This gun was chambered in 308 Win and though liking the feel and handling, I was not sure that its light weight would handle recoil that well, as 308 can be quite barky even in a heavier rifle. For test I shot a number of bullet weights from 150 to 180-grains and up top went a Swarovski 1.7-10x42 Z6i scope.

I found recoil most acceptable with any bullet weight, though a friend of mine thought it kicked like a mule; funny that… Apart from accuracy testing, with the Helix averaging inch groups at 100-yards, it showed a slight preference for the heavier weights, my main concern was return to zero after a barrel change. To its credit it passed that test too, which in this class of rifle is a mandatory requirement.

Operation was smooth with no primary extraction problems (breaking the fired case from the chamber). The action stroke is quite short and surprisingly light, requiring just pressure from thumb and finger on the handle to cycle it. Like I said this takes some getting used to as the abbreviated movement feels initially like it has not fully closed.

The de-cocker is what it is and the effort required to push it up/forward to cock is heavy. Though is a tad easier than the Blaser as it can just about be accomplished in the shoulder while maintaining the sight picture. However, for your average Brit this is foreign territory and like Marmite - you either love it or hate it! I would have preferred the standard, tang-mounted safety from the KR1!

There’s no doubt the Helix is a good looking and modern design with its faceted receiver. Even with a scope on top it’s not heavy and carries and handles easily, with the added advantage of its fast and smooth action and traditional detachable magazine. Plus in 308 it proved very recoil-friendly and I have to say that I like it! However I have two niggles - one is Merkel’s lack of information on how to take the bolt carrier out of the action and two, why do they only go up to 300 Win Mag (9.3x62 excepting)?

In terms of direct comparisons the rifle nearest to it is the Blaser R8. Both offer a detachable magazine system (albeit the R8’s is a tad different) and fast action strokes. The major differences are the more standard receiver layout of the Helix and the fact it does not need dedicated scope mounts and it’s faster, tool-free barrel change. Price-wise, the R8 is cheaper with a standard grade wood gun costing around £2700 as opposed to a comparable Helix at £3100. However you would have to add around £500 for a mount for the Blaser, as opposed to buying a quality set of standard QDs at probably £100 or less. Which still puts them near level pegging.

For our market the lack of 243 Win calibre option does the Helix no favours, likewise no big game options such as 375 H&H Magnum etc. Which I cannot work out why.