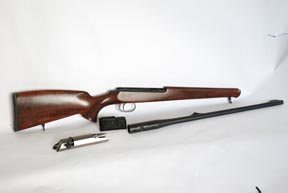 In the UK Merkel are known for their shotguns, but they also make double, semi-auto and bolt-action hunting rifles, this last being the switch-barrel KR1. This concept is perhaps best known from the Sauer 202 and the straight-pull Blaser R93.

A switch-barrel allows the user to swap calibres by changing barrels, bolts and magazines on a common stock/action. This has much to be recommended, as you can turn your 243 Win deer rifle into a 375 H&H magnum for big game use in a matter of minutes.

Merkel use a near identical system to R93 with two studs at 6 o’clock underneath the chamber. These draw the barrel down onto an inner chassis member to give a secure and repeatable position. Apparently similar to Blaser too is the quick detachable (QD) scope mount that clips on top of the barrel.

Visually you might feel that the KR1 also looks like the R93; I do. Likewise, and though a turn-bolt system, there’s no doubting the similar layout of the bolt and carrier and even operating handle. However, in other areas the KR1 offers some improvements as we shall see!

First impression were good, the KR1 comes out as a compact, light and generally handy rifle. The stock is one piece of oil-finished walnut and shows a semi-Schnabel forend; hog’s back butt with Bavarian-type cheek piece, slim rubber recoil pad and fixed sling swivels. There’s a right hand palm swell on the full pistol grip and the length of pull at 14” felt good. Chequering is in the usual places though a little smooth perhaps?

The action consists of a 6-lug bolt set in a large, aluminium alloy carrier, the steel handle is on the right and at the rear is a cocked action indicator. Locking is direct to the chamber and the whole thing comes together in an alloy inner chassis that mounts the barrel with integral rails that the bolt carrier runs on. Essentially and like the Blaser there is no receiver in the traditional sense, hence the scope mounting system.

The KR1 uses a separate, 4-round box magazine that loads from the top through the action. It can be removed by unlatching the whole of the bottom metal (floor plate and trigger guard) and pulling it downwards.

This is not for a quick reload, but to facilitate changing calibre, as the mag stays in place and is manually loaded. Typically the rifle offers only a long action to cope with all cartridge overall lengths (COL). This is reflected in the magazine as they use plastic filler blocks at the rear to adjust for individual COLs.

Instead of a de-cocker system, the KR1 has a two position, tang-mounted safety, which is easier and faster to use. This incorporates a locking lever that is automatically depressed as you place your thumb on it so avoids the possibility of accidental operation. When set to safe with the action cocked or un-cocked the bolt is locked.

To remove the barrel; open the action and floor plate and undo the socket-headed nuts that engage with the threaded studs. The rear one unlike the front is not captive, so will fall out if the stock is turned over. Apart from the two studs the barrel is located by what could best be described as a recoil lug that engages with a cut-out on the underside of the chamber.

The barrel is free-floated in the forend, though there is not a huge amount of clearance between steel and timber. Like any decent switch-barrel design the KR1 will return to zero after you have removed and replaced the tube, which is an obvious essential requirement.

My example came in 243 Winchester and showed a 22.5” barrel though other lengths are available; it also came with iron sights. Not a British requirement as we tend to scope up everything! They are your typical German-style with a high, angled rear U-notch plate (windage adjustable) and a ramped blade up front (elevation only). They come up well and align naturally and are good for close range work.

The QD, MAK scope mount is aluminium alloy and consists of a rail base that hangs over the action and clamps by thumb lugs. There is also a locating lug that engages with a slot on top of the chamber section. Like the barrel the base offers a return to zero facility. My example came with 1” rings and it was here I ran into some initial problems. They are very low and, unless you have an optic with the base of the saddle not much deeper than the width of the body tube, it will not go on.

I had planned to fit a new Nikko Stirling Diamond Sportsman scope, but its saddle was too deep, instead I put on my old Swarovski 3-10x42 A Habicht. This slim line scope/mount combo gives a lovely position and for a European set up sits pleasingly low with the butt offering superb cheek weld and eye/scope relationship.

As can be seen the scope sits right over the action though there is more than enough room for loading the magazine from either side. As it might be imagined the KR1 offers a left hand version, which is simply a carrier with the handle on the left and the ejector and extractor reversed. This is one of the beauties of guns that don’t use a conventional, fixed receiver as it’s so much easier to offer a true southpaw gun at no real extra cost.

I ran a cross section of ammo through the KR1 – Hornady 58 V-MAX and 95 grain SST, RWS/Geco 105-grain SP and PPU 90-grain SP. What I initially liked was the slick and near straight-line feed and the smooth and easy bolt movement even as it was being cocked. The bolt handle offers a shallow lift angle of around 60°, which is nice and practical. Add to this the positive, plunger ejector, the well positioned standard safety catch and the clean and elegant lines, and the Merkel comes up as a nice rifle.

The trigger is of the single set type and pushes forward for the lighter (set) release. To be honest I could tell little difference between the two weights, though did find the blade a bit too far forward in set position for good control. But then again; experience has taught me not to use this facility in the field!

The trigger breaks with a smooth and predictable single stage pull of around 2-3 lbs. Light and easy, it is however never a problem knowing where you are with it. The guard is pleasingly large and will accept a gloved finger with ease.

Accuracy-wise the KR1 preferred the heavier weights, with the 95-grain Hornady SST shooting ¾” and the 105-grain RWS Geco about 1 - 1 ¼”. It was not really that keen on anything lighter. I took the gun hunting a few times and found it a pleasure to use and carry.

Due to the design of the KR1 comparisons to the Blaser R93 are unavoidable, as on the casual inspection the two rifles look very similar. Personally I prefer the Merkel’s feed system and safety catch arrangement, however feel the Blaser has a slightly cleaner barrel change routine.

The other problem is one of perception, as you might feel the Merkel is a copy of the Blaser and therefore a lesser product. However, if you are looking for a switch-barrel rifle and don’t want a fixed receiver system, or a straight-pull action then the KR1 certainly fills a slot.

Typically the KR1 will come from the box without a scope mount, so this must be factored into the price, as do barrels, bolts and magazines for calibre changes. As can be seen the bottom line on the rifle is very high, which is more about the exchange rate than anything else…

We Reckon:
• Light and handy hunter
• Decent switch barrel choice
• No favours on the exchange rate