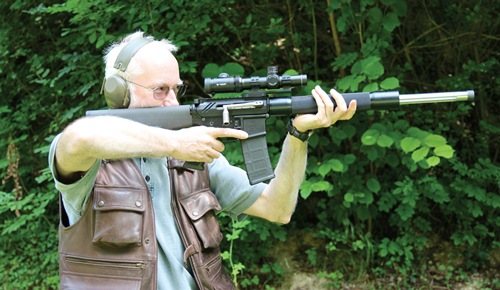 Since getting my SGC Speedmaster and starting to use it my biggest concern now is that all of this could become very addictive. I’m enjoying shooting it so much I’m treating the ammo expenditure a bit like with my .22 rimfire, so I’ll probably have to upgrade my reloading gear, especially as I’ll want to run it in a bit more before I start entering any competitions.

First trials indicate that this gun should be capable of excellent consistency, but the military trigger is stopping the nut behind the butt from exploiting it. So the first modification will be a trigger job of some sort – maybe lighter springs, a drop in kit or a bit of gun-smithing.

I might also try a higher magnification scope. I really like the Vortex Viper and its illuminated TMCQ reticule made target acquisition a real doddle. But even at 50 yards, the centre dot was more than covering the 10 ring on a PL12 target. I figure that I can get more consistent groups if I have a bit better target definition. I’ll see whether I can borrow some alternative optics and see what happens.

It occurred that something around 3-9 x 40/50 or similar would allow me to compete in Civilian Service Rifle (CSR) Service Optic class keeping the magnification at x4 or less then winding it up for general longer range shooting too. I’m going to take the CSR introductory course at Bisley run by the NRA and also try a comp or two. Then I’ll work out a fully prioritised list of modifications once I’ve established some sort of scoring baseline. Being a retired business analyst, my instinct is to explore the price- performance aspects of each modification I make, so watch this space.

Well I managed to get my first competition under my belt sooner than expected. Neil Parnham of Suffolk Rifle was contacted by one of his friends in the NRA and asked (at fairly short notice) to put together a team for a falling plates event to be held at Pirbright Barracks a stone’s throw from Bisley. I guess because it was such short notice and he didn’t have time to make a better selection that he asked me to join the four-man team for this event.

After a really wet hour or so waiting and finally getting a chance to do some zeroing, we convoyed over to Pirbright where the shooting gods decided to smile on us by banishing the clouds and bringing out the early evening sun. Their little joke was to send us some biting insects to make up for the rain, but fortunately I was so excited that I didn’t notice that I’d provided a banquet for them until the following morning.

We watched the military teams do their stuff first and I was absolutely gobsmacked at how quickly those guys could run from 300 to 200 yards then knock down all of the plates. I had to watch the video Neal posted on the Suffolk Rifle Facebook page a few times to appreciate it fully. The winning 4-man team started running at 11 sec into the clip and had flattened all 10 plates by the time the counter got to 30! But then, they were a lot younger and their rifles had fully intact gas systems.

Well, needless to say, we didn’t post anywhere near that short a time. In fact I only managed to send two rounds downrange, hitting just one plate. I had no idea how the other guys in the team were doing – I was too wrapped up in my own little world – but I was told later that one of us hit three plates, one hit nothing, and the other didn’t get any rounds down because they’d left their safety on. I’ll spare their blushes by keeping names to myself.

To be honest, I quite understand what happened. In fact I only just remembered to flip the safety off at the last minute. But I wasn’t that that kept my round count low. The fact is, my mind-set was still in precision mode, which is the only sort of shooting I do at my local club these days. So although I had a fairly quick run-down and skidded as soon as I hit the firing position, the first thing I did (after flicking the safety off and racking the action) was to settle myself into a good position, then get my breathing sorted, the sights aligned and a gentle squeeze going on the trigger.

Beforehand, I’d thought about the weight of the rifle, the heavy and basic trigger pull and a few other things and was sure that they would be accentuated under the (pleasant) stress of competing. But I have to confess, that I was so gee’d up that I reckon I could have gone without ear protection and not noticed the bangs. I did not feel that the gun was too heavy on the run-down – it was just nice and solid. And the trigger just seemed to do what triggers do – moved back until there was a bang at the other end!

The one thing that I did notice though was the TMCQ reticule on the Vortex Viper scope. The light hadn’t faded anywhere near as much as we were told it would and fortunately I’d got the illumination turned fairly high. This enabled me to centre the first plate in the sights pretty quickly; almost without thinking about it.

We were fortunately entered into the classic rifle comp (the first being for almost any type of modern) which meant that I had a second chance to try my luck with a rather sweet Lee Enfield No 4 kindly leant to me by Neal P. interestingly, we all managed to do a bit better this time. We all managed to get more rounds down and I managed to fire four with three plates getting flattened at my end of the line.

LERA (Lee Enfield Rifle Association) members will tell you that the above clearly demonstrates the superiority of their beloved wooden rifles over the nasty modern plastic ones. But what it told me was that mind-set is probably the most important factor in this type of competition. You really need to be geared up to quickly acquire a reasonable sight picture followed by a fast but smooth trigger release rather than spending too much time getting a perfect sight alignment and gently squeezing the trigger. Good cardio-vascular fitness is also an obvious advantage. Mind-set and physical fitness – really not much different from most other sports.

Rifle weight was not an issue and probably helped a lot between shots, so I’ll stick with the heavier fluted barrel for now. I am pleased with the scope and its reticule which made for rapid target acquisition. I didn’t need/want the bipod for this event and the gun felt nice and stable once I got lined up, so on this occasion, the left-hand cocking lever was superfluous. The R/H lever was nice though – the angle which was adjustable was just right for me to operate with minimal hand movement.

What I might change before the next comp? I think this might centre on the grip and trigger. Although I’ve said that I really didn’t notice its weight, or slightly unsmooth pull. Logic tells me that it is bound to have some effect, likewise the slimness of the standard A2 pistol grip. After discussion with Pete Moore, I know that I can make some changes in this area fairly cheaply and easily, so these items will be the first alterations I’ll make to the package. More on this in a later article.