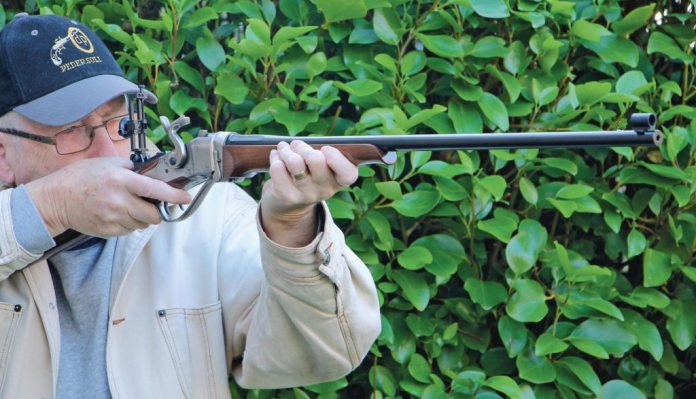 Unlike my last date with Betsy, when I had to assemble the .38-55 ammunition, she proved much easier to feed this time with .22 LR ammo being abundant. The main problem this time was that the COVID-19 restrictions limited our dates, but we did manage a couple of rather short nights out together, where her behaviour was a testament to her upper-class background.

I believe every shooter should have at least one .22 rimfire rifle in their armoury. Depending on your preference, that might be a high capacity semi-auto, or for the Western enthusiasts a lever-action model, or as in this case, a single shot-example. Having been around for well over a century and a half, it is probably safe to claim that more .22 rimfire rounds have been expended in civilian hands than any other cartridge, although military offerings like the .303” British might give it a run in the overall stakes.

There is something rather satisfying and relaxing about shooting single-shot rifles, regardless of the calibre. Small calibres, such as we have here, have the bonus of being allowed on indoor ranges, so the vagaries of the British weather do not impact on your enjoyment, plus ammunition is cheap!

The Sharps falling block rifles proved their worth in the 19th century as long-range arms, a favourite tool of buffalo hunters and target shooters at matches such as Creedmoor in New York and our own Bisley. Creedmoor closed in 1892 (it is now the site of the Creedmoor Psychiatric Centre) but Bisley is still going strong. While buffalo hunting is still practised in the USA, it is not on the scale of past times, when the animal was all but eradicated from North America. Modern Sharps reproductions will be the predominant arm in long range ‘buffalo’ shoots today, using steel targets, and doubtless many of the competitors with Western leanings would love to emulate Billy Dixon’s 1500 yard kill (albeit an Indian, not a buffalo) with a Sharps ‘Big Fifty’ (.50-90 calibre) rifle in June 1874.

The mechanism is simple and quite strong, based on a back-action lock, as found on many rifles and shotguns from the flintlock era to the present day, combined with a breech block/lever combination, the lever also forming the trigger guard. The firing pin arrangement is inside the block, which drops down to expose the breech when the lever is lowered. A pin runs through the base of the block housing from right to left with a tail held in place by a sprung ball. Turning the tail forward through 180° allows the pin to be pulled out and the block/lever can be removed from the bottom of the frame for cleaning.

Unlike Remington, who made their rolling block models in a wide range of calibres from .22 up to .50, the Sharps were only produced in large centre fire calibres, so this rimfire model is a Pedersoli ‘special’. On a visit to the Pedersoli factory in 2005, it was evident to see that Mr Pedersoli was proud of his workforce and their products, and justifiably so. I have heard shooters bemoan the prices of these guns but there is no doubt that they are well crafted and beautifully presented. It is a personal choice as to whether you think they are worth the extra money over their competitors, but in fairness, that gap is reducing.

The Little Betsy is a scaleddown version of the larger calibre models in the Sharps range, with a tapered round barrel where the bigger bores are generally octagonal. The reduction in size shaves the weight down to around 7¾ lbs, and the gun is very well balanced. The 24” barrel and steel butt plate is blued steel while the frame, lever and hammer are polished white, the latter having some precise knurling on its tip. There is a minimal amount of engraving on both sides of the frame and it looks to be hand done when the photographs are blown up.

The wood is said to be American walnut and the Schnabel-type forend fits in nicely with the form of the rifle. Both pieces of wood have a pleasing gloss finish and as I mentioned when I reviewed the larger calibre version, a bit of chequering on both pieces would have been icing on the cake.

There is no rear sight on the barrel, nor is there a provision to fit one, but the top tang is drilled and tapped to accept the supplied Creedmoor tang sight. This is in a box of its own with the screws and it’s a simple job to remove the two grub screws from the tang and pop the sight on. Being the inquisitive type, when I took the sight out of the box, I tried both the elevation and lateral adjustment screws for movement in both directions, not thinking that they might have been set at the factory. The first part of our initial date was spent putting these back to the factory settings!

The front sight is a post with a bead on top covered with a hood and the unit is dovetailed into the barrel. The combination provides an excellent sight picture. The double set trigger arrangement (back to set, front to fire) was even better on this gun than on the larger calibre model and was about perfect straight out of the box. The whole package looks and feels beautiful, so I was more than willing to take Betsy for a night out.

Thanks to the pandemic restraints, we were limited to a 30-minute range slot. By the time I had just about set the rear sight back to where it should be, I had also got used to that lovely trigger pull and sussed the loading and extraction. The rear sight locks firmly in place when raised to the perpendicular position, with no hint of movement that I have experienced on heavier calibres, this no doubt due to the absence of any serious recoil with the rimfire cartridge.

Dropping the lever down to a vertical position, against light spring pressure, exposes the breech and moves the ejector into its first position. The small .22 LR cartridge means that you need to get your finger and thumb into the space behind the breech and the shoulders on that cut-out area are very sharp. Those with larger digits should beware! The cartridge needs to be pushed very firmly home otherwise the block catches it on the way up when you close the lever. After firing, dropping the lever to the vertical position brings the rim of the case just out of the breech. Push it another inch forward (it will return to vertical under spring pressure) and the spent case comes out far enough for you to get your finger-nail behind the rim and flick it out. Most of them came out easily the first time. Our short night out together was all too soon at an end, but I planned another date.

We were out together the following week and this time, after forming a makeshift rest from a shooter’s box and a couple of dusters (the club gear was locked away for fear of contamination), I needed just a couple of minor tweaks on that rear sight before settling into a routine.

As a non-serious target shooter, I tend to stick with one brand of .22LR ammunition, CCI Minimag, as I have found that it works reasonably well in any rifle. If I did my bit, then all of the shots would be covered by a ten pence piece (at 25 yards), but with better ammunition and a more competent shooter, this could probably be cut in half. Perhaps if this virus had not put a constraint on range time I could have dropped the group size myself.

It’s surprising how quickly you can get through ammunition with a single-shot rifle once you get into the swing of things, and as mentioned above, this mechanism is simple and there really isn’t anything to go wrong. As a result, I had an enjoyable and trouble-free couple of outings with this gun, although I’d have liked more time.

Cleaning is easy as you can get a rod down the barrel from the back end and a toothbrush cleans up the area around the breech. After a few hundred shots it would be prudent to drop the block to give that a spruce up.

I’m not sure how Pedersoli came up with the name ‘Betsy’but maybe there is a Davy Crockett fan in their design department as the frontiersman apparently had a couple of rifles with that name. The first one, ‘Old Betsy’, was said to be named after his older sister, while a highly decorated gun presented to him by friends, at a cost of $250 in around 1834, he named ‘Pretty Betsy’.