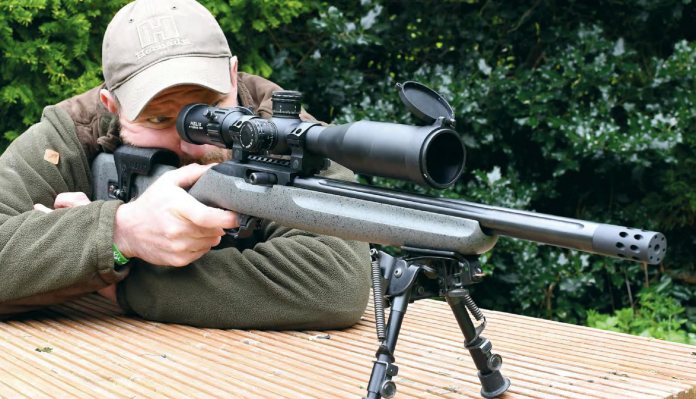 Ruger’s 10-22 is an iconic semiautomatic rimfire rifle and has become a footprint around which to add accessories and customise to your heart’s content, but now the base rifle itself has evolved from the factory. Although the new action is fundamentally similar, Ruger now machines the receiver from billet aluminium, instead of casting it. They also include an extended Picatinny rail for your scope, offering more optical mounting space over the barrel’s reinforce. This is great for the bigger scopes needed for longer range shooting, as well as pest controllers who might want to add night vision or thermal. Picatinny also means that you can swap scopes quickly and easily. Ruger has also added an adjustable cheekpiece to the synthetic stock, with 25mm vertical and 35mm back/forth adjustment. There is an adjustable right-side lever to unlock/ lock movement, so no tools are needed.

An extended ambidextrous mag lever sits on the front of the trigger guard to improve changeovers. It worked intuitively throughout the review and all the current Ruger mag systems are compatible with the rifle (15 or even 25-round capacity). The cross-bolt safety moves right-to-left for FIRE and the opposite for SAFE. The trigger can’t quite be described as a match unit and has a fractional amount of creep, but is consistently predictable with a tactile 875-gram single-stage breaking weight.

The extended steel bolt handle on the right side of the gun speeds up access for cycling the action when required.

The action is externally hard anodised matte black to contrast with the bright steel bolt within. The bottom metal and trigger components are also aluminium. The small steel button/lever that locks the bolt back when needed is still slightly fiddly, but it’s part of the Ruger charm and you do get used to the kind of bi-directional movement required to lock the bolt open.

If you need to strip the gun, a single screw holds it into the stock and when removed, with the safety catch nudged central, the barrelled action lifts clear for disassembly, without any frighteningly tiny components likely to spring clear and disappear.

The Polymer stock has a grey/tan speckled finish, with texture to aid grip on all surfaces. The barrel is genuinely free-floated within the stiff forend, so there is no worry about the two coming into contact and affecting harmonics. A forend stud is fitted, so the addition of a sling and/or bipod is straightforward. The grooves along the forend walls are tactile and stable for grip, plus they are big enough to prevent fingers and thumbs from contacting the barrel. The seriously chunky barrel makes the gun fundamentally stable, with nose-heavy pointability.

At the back, another sling stud is securely installed on the stock’s sloping underside, which is good for sporting use and there is plenty of space for a rear bag. The overall feel of the stock is ergonomically ‘a bit bigger’than it looks, so you feel less likely to physically overwhelm the gun. The length of pull measures 13.75”. The cheekpiece is very comfortable and there is a decent reach to trigger from the slightly palm-swollen ambidextrous grip. Additional balance is created by that long Picatinny rail, which allows the scope to sit sufficiently forward for correct eye relief.

The barrel is very chunky (23.4mm diameter), measures 16” and shows a ½”x28 thread. It’s also fluted and shows a blacked finish to contrast with the stock and balance the black cheekpiece. Ruger supplies a polymer, pepper-pot muzzle brake to protect the threads from damage. A brake on a .22LR seems a little bit pointless, and I can see most UK shooters adding a sound moderator instead.

I used a DPT moderator with subsonic ammo for quiet use throughout the review and although semi-autos are a little noisier than boltaction rifles, they are generally pretty accurate and still perfectly capable for hunting. In terms of ammunition preference, target shooters and those who appreciate the most action speed and reliability might use 1200fps ammo, but thankfully the buffer springs in the action appeared well balanced to operate reliably with subsonic RWS hollow point ammo.

Precision machining the action, instead of casting, gives better tolerance control and you immediately notice a more clinical feel for the bolt within. There is much less rattling on firing, it’s simply snappier and now includes a polymer, not steel, rear buffer.

Overall, I managed cloverleaf groups at 50m and at longer ranges (100m and beyond), I was getting some pretty good groups of around 150mm with Hornady round nose ammo, which offered more speed and a fractionally flatter trajectory than the super quiet RWS subsonic. At 50m the Hornady groups on paper were all sub 10mm centreto- centre, which I found more than acceptable. Shooting seated or prone from a bipod showed no appreciable point of impact shift, indicating that bipod/stock loading caused no issues for the barrel harmonics. The RWS opened a little at around 16mm on average but for pest control needs, it’s more than adequate considering the hollow point’s inferior ballistic profile.

I have owned several 10-22s but all of them were used guns that got heavily modified. Even though the mechanics of the new rifle are smoother, lead shavings and bullet lubrication are still the maintenance downfall, so keep on top of it, especially when it comes to the breech face and the magazines. These are still straightforward to strip down and clean, but life is always easier if you avoid waxy/low-viscosity lubricated bullets or ammo prone to excessive powder fouling. Combined with fundamental bullet performance through the barrel, it’s well worth experimenting to find the best balance of consistency and a cleaning regime you can live with. You might even like copper-washed bullets if they reduce fouling.

After covering the basic elements of the design, the big news is that Ruger is offering a dedicated left-handed version of this rifle, which may well be a first. I can’t think of any other semiauto offering this option. The action is truly mirrored, so with left-side ejection, you also need specific lefthanded magazines, which Ruger has maintained identical pricing for. I’m really pleased with this, it’s not so much a technical difficulty, because once you are machining, not casting, it’s as easy to machine a lefty as a righty, in most respects. What impresses me is the significant financial commitment to the injection moulding tooling and logistics for the specific left-handed magazines. Hot brass is now ejected away from the left-hander and although brass usually always goes forward as well as sideways, it’s also directing gas blast and particulate debris away from the shooter’s eyes. Well done Ruger!

This is a fun rifle and it shoots well on target. As well as an up-to-date stock, I like the fact it shows the delicate evolution of what is fundamentally a sound design at the price point, and that Ruger is seeing their competition catch up, but is not letting them immediately overtake them. An extended Picatinny rail is a massive ergonomic benefit, it spaces the scope better and makes the gun feel bigger, without adding bulk. The barrel is wonderfully stable, clearly accurate and dependable through heating. The trigger will always perform best with good technique, but those who snatch at triggers will fair less favourably, so practice! Feeding, ejection and cycling, even before the rifle could be considered run-in (and this was a brand-new unit), were dependable. I only suffered a couple of misfeeds through the first 300 rounds with CCI ammo, whose rims seemed to inadequately engage with the extractor claw on the bolt face. The firing pin strikes on the case rims looked strong and ejection was vigorous, with no ‘spinners’ bouncing back into the ejection port. These were common causes of action jams in the past.

Don’t confuse this new Ruger with older second-hand guns, it’s a significant step forward and hasn’t given me any of the problems that would likely dishearten a new shooter without the experience or patience to overcome those of the cast receivers, which generally took a while to run it.