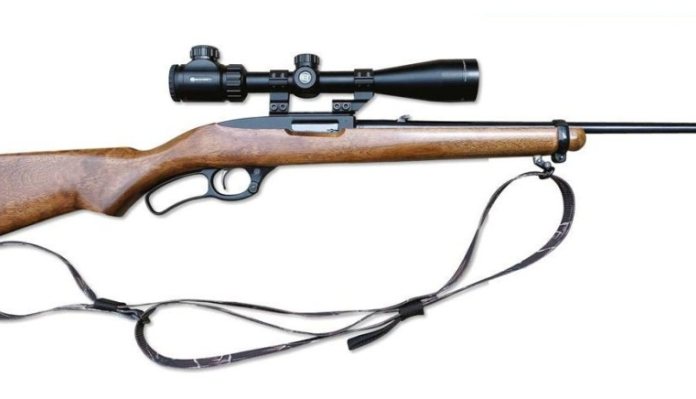 This gun sort of fell into my lap, as I bought it off a retired game keeper who was also selling his CZ452 Varmint in 22 Long Rifle, which is what I was really after. However, the asking price for both was just £250 (with scopes) and this Ruger 96/22 M (22 Winchester Magnum Rimfire WMR) sort of appealed as a rather different approach to lever-actions. Also, I rather fancied a 22 Magnum, as although I consider the 17HMR superior in longer range accuracy, the greater energy and bullet weight of the WMR makes it a good bet for shorter range foxes. Plus, for the money, it’s a bit different and unusual, so interesting.

The 96s, regardless of calibre, all look very much like a Ruger 10/22, with an enclosed receiver and similar stock, cross bolt safety catch and barrel band and iron sights. The main visual difference is the obvious, short stroke operating lever and more angled rear of the receiver. The stock is hard wood and offers long and slim angled pistol grip, low/square comb and a horrible shiny plastic butt plate. Feed is from a rotary magazine with the 22WMR version taken directly from their 77/22 M bolt-action and holding nine rounds.

Sights consist of a brass-beaded blade up front in a transverse dovetail and a fold-down U-notch plate with limited windage and elevation correction. The receiver is threaded for a short, 11/12mm dovetail base.

The bolt locks in front of a steel insert in the rear of the alloy receiver, on operating the lever, the rear of the bolt is pulled down to disengage then further down and back to the rear. This is not dissimilar to the old Savage 99C (clip loading) fullbore lever-action rifle mechanism, which I guess Ruger might have taken a lead from. The throw is short and fast. Magazine change is as the 10/22, with a press in plate at the rear of the mag well. Unusual, is the fact that the action has to be cocked and the lever cracked open about ¼”, otherwise, the mag catch will not operate easily.

From my experience, I’d not want to push any 22 Magnum much past 130 yards in terms of accuracy. The trigger was not amazing at a heavy 6 lbs, but it was shooting around the inch, which is good enough. Unlike the 10/22, there are no after-market, drop in kits to improve things, and it’s a gunsmith job to lighten it. However, and as I said, for a compact and handy repeater for a shorter range foxing gun, it certainly puts them down better than the 17.

Anyone familiar with a 10/22 would have no problems operating the 96, as the cross bolt safety is at the front of the trigger guard with a similar, though longer, push-up mag release at the rear of the well. My example was not threaded, which would require the front sight to be removed and the boss turned down. Two slight differences are a cocked action indicator pin at the rear of the curved receiver and the usual, small ½” dovetail for scope mounting does not use the same screw spacing as the 10/22. The 44 Magnum had an all-steel receiver, logical really given the calibre, complete with an integral rib that accepts Ruger’s dedicated scope rings.

The beech stock shows a very short length of pull (LOP) and the familiar shiny plastic butt plate. General condition was reasonable and came fitted with an old Pecar scope. The previous owner had bodged a butt extension with green tape and an old leather, slip-on pad. As luck would have it, I had a proper, Mini 14 rubber butt extension, which solved the LOP and slippery in the shoulder problems.

In terms of lever-actions, it was quite a step forward with its detachable magazine over the more traditional Winchester 94 and Marlin 1894 tube-mag designs. However, I think where Ruger fell down was in not offering it in other centrefire calibres like 357 Magnum or 45 Colt. Equally, the low, 4-round magazine capacity of the 44 Magnum version did not help, I assume they only saw it as a hunting carbine. Their thinking was probably based on the M44 and Deerfield autoloaders. In 38/357 with say a 10-shot clip, the 96 could have been quite the thing and would have gone down well in the UK post the handgun ban. In 22 Long Rifle, it could also accept the 25-round banana mags like the Butler Creek or later Ruger BX25. However, I have seen few examples in this calibre. Overall, a better mousetrap that was way ahead of its time in some ways, but one that was not properly thought through, with ease of production outweighing proper product research. None the less, one for the collection and in the field occasionally.