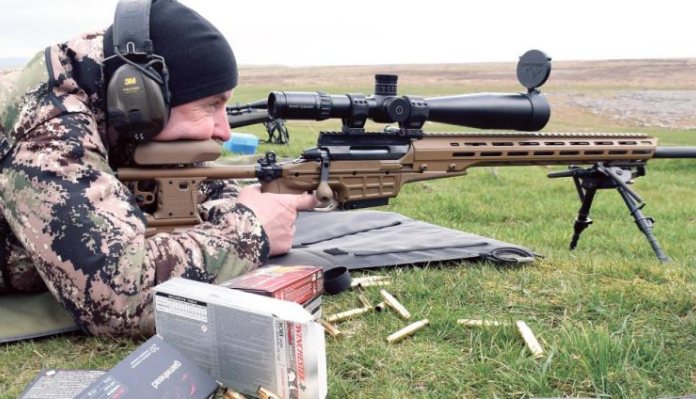 Sako’s original TRG was the first ‘big gun’ rifle I shot in 338 Lapua magnum and I became a fan of the marque immediately. The updated multi-barrel M10 version was a fairly rare but intoxicating beast that I first used more than four years ago; so, the arrival of the updated TRG 22 in ‘A1’ specification that shared some of the M10’s updated furniture was an exciting step.

The TRG 22 is the shortactioned version, available in 6.5 Creedmoor, 260 Remington and 308 with either 660mm (26-inches) or 510mm (20-inches) barrel (the TRG 42 handles the 300 Win Mag and 338 Lapua cartridges). Compact is nice but barrel length always enables velocity when comparing like for like but folding drops 280mm/11-inches off overall length for transport, making the long barrel option the goto choice for me. This rifle is designed to be shot prone, or from well-supported positions, so a short barrel for more central weight balance seems illogical given the stock’s long-range suitability. Cerakoted for ultimate corrosion resistance in Coyote, the A1 offers a solid locking, twin hinge with NO annoying rattle in its solid lock up either straight out, or folded to the right side of the receiver, where it wraps the bolt handle and similarly locks in place so wont flap around. The adjustable recoil pad offers 32mm of vertical adjustment from a sprung button to the front of the mounting rails that give 45mm of Length of Pull (L.O.P.) adjustment, allowing the rifle a span from 343-387mm (13.5-15 .25-inches), likely fitting most shooters and clothing/ shoulder strap requirements. The inch-thick rubber recoil pad grips well into the shoulder pocket with no hard spots.

So far, excellent adjustability but best yet is the soft touch rubberised cheekpiece with about 30mm of vertical adjustment in 3mm increments, aligning perfectly with your optic. The small catch below the comb enabling movement is hard to access in gloves and had a tendency to lock in position, needing the small Torx from the onboard kit to lever it. None have positional memories, but machined bands enable visual counting or preferred options. There is a slight play in the length of pull adjustment that you can feel and take up when loading the bipod, but this is more cerebral issue than real problem. Any downsides are more that recompensed for by the comb itself though, tall and slender, it fits under your cheekbone without displacing your jaw sideways and allows superb gun to fit that was enjoyable to tailor-fitting of and shoot all day long with no transmitted concussion into my skull. Excellent linear recoil transit direct into the shoulder too, I had the buttpad lifted high when prone!

The long octagonal tubular forend is compatible with M-Lock accessories and extra lengths of Picatinny rail are supplied to fit where you and your accessories desire. I used my favoured and somewhat old-fashioned Harris bipod with an adaptor, but the choice is yours with all options enabled for firm support. Sako supply Allen keys and Torx wrenches to make alterations and adjustments with a detailed instruction manual to disassemble the rifle. A Bolt cocking tool is supplied as well at two extra, ‘Medium’ and ‘Large’ pistol grip inserts that increase the size and palm swell of the underslung grip. The underslung grip isn’t as low as some chassis rifles, thanks to the twin hinge stock and this has nothing but ergonomic benefit in my opinion.

Access to trigger and bolt handle are both superb, the former being adjustable for both reach and rotation angle as well as pull weight between 1.2-2.1kg with an ultra-crisp feel. Some adjustments require removal from the action but once set, and it came setup beautifully for me, it is a fantastic trigger and without naming names, exceeds the feel and capability of some of this rifle’s sworn competitors. Military Tactical rifles tend to like triggers a little heavier, with unusual specification of 1st v 2nd stage pull weight, with the latter being a small addition to the larger ‘first’ weight. This may suit military requirements, but I find them tedious, with less speed of feel than this Sako’s, which offered 600-grams to draw the wide, smooth, curved blade through to the well-defined ‘edge’, before a full squeeze to 1600-grams broke the ‘glass rod’, so-to-speak. This encouraged me to operate the trigger in any way I desired with speed, like a McQueens, I could confidently hold on the second stage for extended time without fear of an ill-defined margin of error between the two. Given the opposite way around, holding 1500-grams for the first stage before adding another 500g for a ‘break’, I’d pick the TRG all day long and, as anyone familiar with two-stage, air rifle triggers will agree, the Sako shows the more similar approach.

Other features of the action are a three-lug push feed bolt feeding ammunition from a ten-round steel detachable magazine. This mag loads from the front between central single round feed lips, before the rounds stagger below into two columns. This is a slight downside relative to magazines that can be top loaded, it is simply slower to load. Single rounds dropped on top of the magazine through the ejection port will feed smoothly into the chamber with strong primary extraction after firing. Ejection relies on a spring plunger and, although fully functional at standard to firm operating speed, will actually flip the cartridges through 180-degrees and drop them back in on themselves when cycled slowly, as you may do when single loading and slow firing rounds.

The upside to the slightly weaker spring is less deformation to the cartridge mouth, as it is drawn out and flicked against the chamber’s wall, but you will occasionally find yourself manually extracting from the top of the magazine, especially if when trying to catch brass, it bounces straight in from your waiting palm. I find it strange that Sako’s own manual encourages you to treat it gently and not pull hard into the bolt stop. In reality, Sako’s bolt stop will not fail you; so, draw the bolt back positively and you will have no problems

Otherwise, the action is a delight, with a coated bolt for smooth transit along its 100mm stroke. The 50mm bolt handle offers plentiful leverage, without excess length. A nice ‘flick’ in its shape where the 35mm teardrop polymer handle attaches, sits comfortably above the trigger finger, awaiting a seamless flick open from the firing hand fingers, a delight to use. The top of the action and forend carries 30 Minutes of Angle (M.O.A.) inclined Picatinny rail for spacious scope mounting. The 170mm steel section directly above the action blends seamlessly into the remainder of the aluminium rail, reaching 520mm in total length atop the octagonal forend. This fully floats the barrel by some margin, enabling plentiful cooling airflow and little chance of any dirt getting jammed within its 46mm width and 56mm height. It slots over central chassis foundation with twin bolts to secure in place. These can be slackened and removed but removing its nipped fit has proven to be a workshop job for me in the past, it takes a serious pull to draw it off, the action clamped in a vice.

Behind the chassis’ central, intricately-machined action inlet with multiple weight saving cut-outs, the rear end supports twin steel rods to the grip, where the hinges are positioned top and bottom. Small, Medium and Large palm swell inserts are supplied for the grip, again using the onboard toolkit in front of the magazine well for swap over.

Schmidt and Bender supplied me with a 5-25x56 PMII FFP optic for the review, which thoroughly suited the rifle, sat in Burris XTR rings that themselves added another five M.O.A. to the mounting solution. Run in and cleaning showed few doubts about the hammer forged barrel’s breeding and don’t forget, all Sako rifles are tested at the factory for guaranteed sub M.O.A. capability before they leave. GMK sent me some of the lighter 123gr Gamehead ammo that will happily hunt deer but didn’t suit the 1 in 11-inches twist rate of the barrel, managing only 1.25-inches groups at 100-metres. As was expected, the 26-inches barrel drew appealing velocities from all ammunition tested with these lightest bullets exceeding 3000fps. 178gr Hornady ELDX seemed a better choice for the barrel but groups edged M.O.A. with undesirable extreme spread in muzzle velocity for long range precision. Group shift was almost insignificant from the heavy 22.2mm diameter barrel and it was in the mid-range weights where the precision revealed itself. 168gr HPBT match ammunition from Hornady and Winchester performed within tolerance producing 23 and 26mm groups for five rounds at 100-metres, but king on this occasion was Winchester’s 150gr ‘Extreme Point’. This is a comparatively long bullet with a much larger (low relative density) polymer ballistic tip that in fairness, has always been a bit of an outside choice for me, yet in the case of the TRG, it produced ragged cluster groups at 100-metres with 2730fps muzzle velocity for 2483ft/lbs muzzle energy.

I shot for a whole afternoon out to nearly 800-metres with this combination, showing an extreme spread below 30fps, and enjoyed excellent results given the 20mph+ gusting winds that day. It’s funny how ammunition can just Gel with a rifle and clearly the long overall length of the bullet, rather than just the ‘mass’ suited the twist rate and velocities for assured reliability that I don’t always experience with long strings from factory ammunition. Precision shooters will no doubt reload their own ammunition and this rifle is well worth the effort to craft fodder that will only improve upon what factory ammunition can achieve.

Although man portable and shootable from standing positions, its near 7kg weight with your choice of scope and Bipod, plus a likely moderator or Brake too, recoil is minimal. Watching your bullet’s splash on target at ranges beyond 225-250-metres was possible and that was without brake or mod. The gun is perhaps a little too bulky for PRL type shoots from improvised rests but for long range plate shooting, range shooting or extreme long range when applied to the TRG 42’s 338 Lapua, for me this rifle’s trigger does hold an edge. I find the stock comfortable without undue neck/vision distortion and the solidity of the hinge with slightly higher consequent grip ergonomics make the gun more appealing than a truly underslung handle on a single bar/hinged chassis.

The ambidextrous safety catch sits in front of the trigger, within the spacious guard, where flicking it forward allows ‘fire’, without any overall hand movement; however, if you do want complete silence in operation, a pinched index/ thumb grip will allow it. A 6mm wide button plunger behind the bolt handle allows unloading with the safety applied but it’s small and requires a very firm press to allow the bolt to lift. This may ease with time but regardless, the button might do to be a tad larger. Sling fitment on the forend is up to the user but multiple locations at the hinge and on the butt allow versatile alteration for your preferred sling carry style in what, overall, I consider to be a well-designed rifle.

I have shot all the main competitors to the TRG A1 and, although liking elements of most designs, the trigger here will sway it for some, although the single stack magazine is a little slower to load than dual staggered columns.