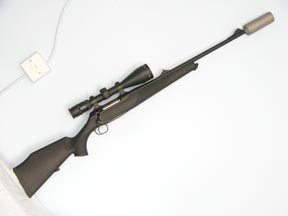 I’ve never owned a Sauer 202 though I have tested a few examples and generally came away with mixed impressions. Nicely put together no doubt, with well designed and innovative controls, add to that a detachable magazine and the ability to swap calibre/barrel and you have a most versatile system. However, though accuracy was acceptable I never found it stunning, which when you are paying £1200 + for what is probably the top European bolt-action is a bit hard to swallow.

However, it’s a German product and though aimed at the world market is obviously biased towards the home turf, which is illustrated by the fact that most of these rifles still come with iron sights as standard. Certainly not a British thing, but still a firm favourite in Europe. Which brings me to the issue of what passes for acceptable accuracy in a country where most of the hunting is done in woodland/forests and a long shot is probably considered to be 200/250 meters. If that’s the case then a rifle that can group between 25-40mm @ 100 meters is more than up to the job.

One of the aspects of the 202 that immediately endeared it to me is the fact that it is offered in a synthetic-stocked version, called unsurprisingly the Synthetic. With a tough, Ilaflon finish to the metalwork combined with the polymer furniture, I considered that the Classic Synthetic Sauer had come of age for the modern hunter who needs a true, all-weather rifle.

In terms of build the 202 is a little unusual, in that the stock is in two pieces (forend and butt) that attach to a full, alloy receiver/action, which includes integral 1” scope bases, the trigger group and magazine system. This means that bedding is not an option, or for that matter required, though the barrels come floated as standard.

The barrel change is accomplished by the chamber section sliding into the front of the receiver, where it’s retained by a split clamp with cross bolts. This is both simple and effective. Unlike other switch calibre guns, which offer a removable bolt head, the 202’s is solid, so if you were to go from 223 Rem to 30-06 then it would mean a whole new assembly. However, by choosing sensibly - say 22-250 Rem and 308 Win - this would not be necessary. The controls are nice with a clever, ambidextrous push button safety, which is located on the tang and inside the trigger guard.

With the action cocked, push down on the button in the tang and the one in the trigger guard pops out, this sets the action to SAFE. To fire; move your trigger finger forward and simply push up on the button to reverse the action. Feed is from a single column, 3-shot, detachable magazine, with a button at the front of the well that ejects the clip. A small spring located in the well pushes it out, which is helpful, as being flush-fitted there’s not a lot to get hold of.

To the left front of the trigger guard is a plunger, which pushes up to allow you to remove the bolt. The trigger is a single set mechanism and offer a standard pull of around 3-4 lbs, which is crisp and readable. Pushing the blade forward sets the mech for a lighter break of around 1-2 lbs, again easy to use and not likely to go off unless you make it so. However, as with all set triggers, what they offer needs to be understood and appreciated before using it in the field.

The stock is a black synthetic with the butt showing a neutral, raised comb and right hand palm swell with thumb cut out behind. At the rear is a rubber recoil pad and socket-type QD swivels are fitted back and front, the latter being in the tip of the forend. When removed it allows access to the horizontal bolt that holds the forend on to the action; Sauer supply all tools required to change the barrel too. Though offering a decent, non-slip surface, grip is improved by panels of cast-in texturing.

The forend is deep though not too wide with a semi-Schnabel tip. It proved to be reasonably rigid and even with pressure applied to the underside it moves a little but not enough to touch/influence the barrel, though it does show a fair bit of side float… But I would say it’s good enough for a bipod, however, Sauer choose not to fit a normal QD stud, so you would have to do that yourself. Basic iron sights are fitted as standard with the usual blade and U-notch, which is more than adequate for driven game use, but for the UK hardly top priority.

As ever the 202 comes across as a well made and designed hunting rifle, that with its 22.25” barrel offers a competent and handy package. My example was in 308 Winchester, which is a good choice for the UK hunter. Not cheap at £1212, which is around twice the price of a Remy 700, the gun nonetheless exudes an air of competence. Where this 202 differs is in the fact it comes factory-threaded 14mm for a moderator, which is a big step forward indeed. I say this as more hunters are turning to suppressors for both hearing protection and the fact it makes them less obvious to their prey and also the general public. This I hasten to add was at the instigation of the importers - Beechwood Equipment - who rightly felt it was a good move for our market and I whole heartedly agree!

From my experience other useful aspects of fitting a moderator are to cut down recoil and improve consistency/accuracy, on what is in the main a light sporting barrel. As the 202 was fitted with iron sights I had to use a muzzle-mounted design and I chose the ASE UTRA S5 from Jackson Rifles, which is an all-stainless compact. Short and fat, it’s not the prettiest thing, but it takes little away from handling/balance and proved to be an efficient design in terms of what it does.

Trijicon up Their Game

Beechwood Equipment supplied the new 202 fitted with a Trijicon 2.5-10 x 56 scope. This make is different by the fact it uses a simple single post reticule with an illuminated tip. It has no batteries but relies instead on a fibre optic to gather light to give you a triangular orange aim point, which is adjustable for brightness. This is accomplished by a sliding cover on the eyepiece bell that allows lots or little light on to the optic. I have used these before, but this new spec is far preferable to the earlier 3-9 x 40s, as is the far better build quality.

I chose Winchester 150-grain Ballistic Silver Tip ammo, which, weight-wise is probably the most standard loading in this calibre. Though liking 308 I have always found recoil a bit sharp and snappy in lightweight hunting rifles such as this. Prone supported the 202 was producing 1 ½” (38mm) groups, which is pretty much what I expected, though I have to say that the recoil did not feel as bad as with some other makes of 308 I have shot.

Screwing the S5 onto the end told a whole different story, with groups dropping to ¾-1” and a subsequent reduction in recoil and improvement in shooter control. For such a small can sound moderation was good with a short/flat report and no ear sting either. General operation was good, as the rifle fed and cycled easily, with the round bodied bolt running slick and smooth, almost like it was floating on oil. The plunger-type safety system takes a bit of getting used to, but you soon appreciated how easy it is to just push up with your trigger finger to put it in FIRE mode.

The standard trigger pull is more than acceptable, but if you want the lighter release it’s also there. I found that to move it to set mode requires a good push, which in my opinion is no bad thing, as it’s not something that can be done by mistake. The butt though showing a right hand bias is still easy and comfortable to use, even if you are of the southpaw persuasion…

The other aspect of the design I did like are the integral 1” Weaver-type bases. Usually with European rifles of this nature scope mounts are dedicated, for that read ‘loadsa money’. The Trijicon was fitted up into a set of Warne rings, which are not expensive, meaning it’s a lot less of an issue to get another set if you want to swap scopes when you change calibre.

The Sauer 202 is a good rifle that offers some useful features and acceptable accuracy from the box, and for those looking for a prestige design that can also work for a living then this is it. The addition of the threaded muzzle makes this gun even more attractive, as apart from the obvious advantages of moderation it also tightens up on performance too. But for we Brits I’d certainly lose the iron sights…

The Classic Synthetic aside, Sauer’s 202 rifle system is pretty comprehensive, as it offers the following choices: