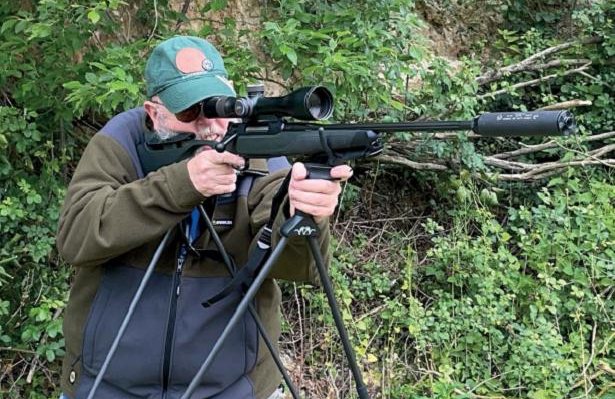 I must admit to not being a fan of Sauer’s 202! Without a doubt, it’s an excellent rifle with some practical features, plus it was one of the first switch barrel systems, and at one time the most popular hunting rifle in Europe, with a loyal following worldwide. I’ve used it more than once and have few complaints, but it has never really blown my skirt up, I can’t explain it, but that’s the way it is.

Sauer is a part of the Blaser Group that also owns Mauser and of course, the original R93 straight-pull. We have seen the demise of the Mauser M03 and the introduction of their M12 and M18 guns, plus the R93 being superseded by the R8. Also, the introduction of Sauer’s 101 and 100 models. In 2015, they announced the replacement for the 202 - the 404. Logical really, as the former was starting to look a bit dated, compared to what the M03 and R8 offered.

Similar to how Blaser upgraded the R93 to the R8, while still retaining the look, handling and some features, Sauer did the same with the 404. A sensible move, as historically, when a so-called improved product comes along, owners of the original tend to compare it unfairly. There’s no mistaking the parentage, as barrel swap, essential furniture and feed systems remain, but there are also some changes. However, if you blindfolded a 202 owner and gave them the 404, feel alone would make them think they were still holding the original, a feature doubtless intended to encourage them to make the transition.

There has also been a deal of cherrypicking going on, which is common practice in gun design and as we shall see, the 404 also incorporates features or concepts from both the R8 and M03. But there are also some new ideas, some of which I applaud, others I question a little.

So, why am I prattling along about a design that has been established and accepted over the last seven years? Simple, prior to 2015, I’d say that the Blaser Group pretty much had the whole, high-class European, switch barrel hunting rifle scene 90% their own way. But there’s been an increase in the competition too. Chapuis’ ROLS and Beretta’s BRX might be considered R8 clones, plus there is Merkel’s Helix, Haenel’s NXT, Strasser’s RS14 and Savage’s Impulse.

With these newcomers, you could be forgiven for overlooking the 404, or if you were not aware of this model, think it a 202. My initial reaction too was lukewarm - is this the same thing but with new features to allow a price increase? And like its predecessor, I shot it and found nothing wrong, but nothing amazing. However, and in retrospect, I feel I was too hard on it and would like to redress the balance in the light of experience. For this test, I chose my favourite layout, the synthetic-stocked, thumbhole-configured Synchro XT. Similar, simpler and slightly cheaper is the Classic XT with its pistol grip stock.

The basic design premise of the 202 is retained: hi-strength aluminium receiver, using a detachable, single-column box mag in 3, 5 and 8-shot configurations, with a lockable, press-button release catch. Barrel retention is by friction and uses a split front action with three (clamping) cross bolts securing the chase (parallel chamber section), with the bolt engaging directly into the rear of the chamber extension for a 100% lock up. The forend and butt are separate and attach to either end of the receiver, but now in a more practical manner.

Major mechanical changes show a replaceable bolt head, not unlike the M03 system, much better than the 202, which used a one-piece build that entailed buying a whole new unit if calibre necessitated a different case head size. The receiver is now cut for their dedicated, SUM, quick detachable (QD) scope mount, however, it’s not included in the initial purchase, so you have to factor in the thick end of £600. Doubtless, Blaser-inspired, is the de-cocker that replaces the 202’s tang/trigger guard mounted double plunger system.

The stock is a two-piece green synthetic with a soft touch finish and elastomer rubber inserts on the forend and pistol grip. The butt bolts on and can be removed for transit, so allowing a smaller gun case (optional Sauer accessory). On the 202, the forend was retained by a bolt that passed down the middle, with an Allen key supplied to take it off. Sauer has re-thought this with their SUS key.

The furniture comes complete with QD sling swivels. The front one sits in the tip of the forend and when removed shows a tubular handle with a fold-out, multi-function Allen key inset (SUS). It can be used by inserting it into the small hole about 2” in front of the mag well, and a 1/4-turn unlocks the forend allowing it to slide off forward. With it off, it allows access to the barrel retaining bolts and also the 4-position, trigger adjuster. The rear key is shorter and in the case of the Synchro XT, allows the setting of the height-adjustable comb. The forward socket does double duty as a spigot adaptor for a dedicated bipod too.

I really liked the 202’s safety catch and found it practical, well positioned, with little loss of firing hand grip. The change to a sliding de-cocker, is not as slick. Mounted on the rear face of the bolt shroud, you press a button at the base, then, with your thumb, push it up/ forward until it sets. To de-cock, just press the button and it slides back down. Like my R8, I have always found this hard to operate in the shoulder, unless you drop the muzzle, which allows better address. On the plus side, when decocked it renders the rifle totally safe, even with a round up the spout.

The bolt shows a swept back handle with generous ball end that offers slick manipulation, with the release catch at the rear/left of the generous trigger guard. The trigger blade is mid-width and nicely curved for a secure finger position, plus it can also be moved side-to-side by 50 and front-to-back by 8mm for fine-tuning. If you need to change the bolt head, it’s a simple matter of pulling the latch behind the head and sliding it down and off.

Barrel change necessitates removal of the forend with the SUS key. This exposes the three cross-bolts that are numbered 1, 2 & 3. They don’t need to be fully removed, just slacked them off a turn. Open the bolt, so it disengages from the locking lugs, pull down the locking lever underneath and then slide the barrel forward and off, it’s as simple as that. To return it, the chase engages with an integral key, push it in until it stops, then keep applying pressure and rotating it slowly and you will feel it drop in.

Now, close and lock the bolt, which will keep the barrel in the required orientation, then return the locking lever (parallel to the barrel). Next, wind in the cross bolts in sequence and nip them up first, before applying the final pressure. Sauer recommends 5 Newton Meters each, but the SUS acts like a torque wrench, as it will flex slightly when it can go no further. I have never found any issues with this method.

Generally speaking, scope position, mounting and barrel re-installation, will affect whether or not you get a 100% return to zero, which is what switch barrels are all about. I would always recommend a check zero after a swap, but that is not always possible. Taking the most accurate load, Norma’s 170-grain Tip Strike, which shot 0.7” @ 100m, I did the barrel swap and the group opened up by 0.3”, but pretty much maintained its point of impact, which is more important. The extra 0.3” could have been me, or a minute, mechanical variation. Honestly, 100% repeatability is near impossible in the real world but is near enough for government work.

Now we come to my least favourite feature, the adjustable, QUATTRO trigger. With the forend removed, it’s rear/left of the action. This 4-position rotary adjuster is marked in Roman numerals: 6 o’clock ‘I’ 1.2 lbs, 9 o’clock ‘II’ 1.7 lbs, 12 o’clock ‘III’ 2.2 lbs and 3 o’clock ‘IV’ 2.7 lbs. The SUS key is inserted into the middle and then turned to select one of the four options, plus there’s a square, white pointer in the middle so you know where you are. Don’t get me wrong, I like a good trigger, and appreciate adjustment, but in use, I could tell little difference between the individual settings, apart from a vague increase in weight. In the end, III seemed to suit me best, and once set, it gave good service with a readable and crisp break.

My tester came with a 22”, fluted, standard weight barrel that was threaded 15x1mm and a Titanium Pro, reflex moderator. On top, an original (B1) Blaser 4-20x58 ic scope in Sauer’s SUM European rail QD mount. Alternatively, there’s a ring option too.

I picked five non-lead (NL) and two lead-cored loads. With the exception of the Barnes 130-grain Vortex, which was too light for stability, they all shot between 1 – 1.5”. Even the 136-grain RWS Evo Green cut the inch easily, with the GECO 165-grain Star proving the best.

The lead shot better, with the Norma Tip Strike 170-grain BT hitting 0.7”, proving with the right ammo, sub-MOA is possible. New to me was the Australian ADI that uses a Sierra 165-grain Game King bullet. This one shot an inch and gave the best speed/energy, but also showed massive bolt-thrust issues with very hard unlocking and marking on the bolt face, all a bit worrying.

General feed and function were good, with easy bolt manipulation and reliable extraction and ejection. I liked the fact you can lock the magazine in place if required, but in that position, you cannot load it through the receiver, just one at a time into the chamber, if it’s empty. You soon get the knack of operating a de-cocker, but I still prefer the original 202 system as it suited me better. But these and the QUATTRO trigger are trivial points, more down to individual preferences. Overall, the 404 is perhaps a better mousetrap after all.