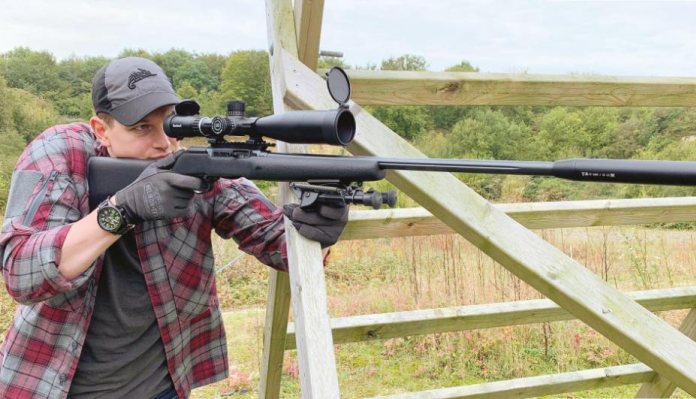 Although there are a plethora of military-style, look-a-like 22 Long Rifle (LR) semi-auto rifles, more sporting self-loaders are seemingly less popular and thinner on the ground. I say this, as we Brits tend to favour bolt-action rimfires for small game hunting, I know I do. Probably the most recognisable semi in this area is Ruger’s 10/22, which I believe is still the most popular of its type anywhere, with 10 million plus units being sold to date.

If you can’t beat them…

22 semi-autos are without doubt more popular in the USA and most of the major manufacturers offers something. For some years, Savage has produced their model 64 in a number of versions, essentially the same as Marlin’s 795, it’s very much entry level and been around for a long time. I guess Savage looked around and thought that they needed something with more curb appeal. Enter the A22 series, also available in 17HMR, but that’s not for the UK for purely legal reasons. I first tested their A22 Magnum model (22 Winchester Magnum Rimfire) in 2018, it came with standard, plastic stock, which was OK, but it had potential. Their website showed a number of furniture options that included thumbholes and more precision/varmint types in wood, polymer and laminate.

On test, is the A22 GV with Boyd’s Pro Varmint stock; looking at the rifle objectively, in some ways, mechanically it takes its design inspiration from Ruger’s 10/22, in areas like the magazine and hold open system. However, it also offers familiar in-house features like its Accu-Trigger and some unusual areas too.

First impression is of a long rifle, pushing the tape at 41.5” overall and less moddy, with a whopping, 22”, mid-weight, semi-fluted barrel. It’s threaded the American ½ x 28 UNEF, which is not a problem these days in the UK and bare backed weighs a hefty, for a rimfire, 7.2 lbs. This is mainly due to its dense wooden stock and all-steel receiver. The stock is hard wood with a black coating, probably a tough paint with wood chips in it that gives a pleasingly textured grip all over. The butt is McMillan-like with a squared off shaped and a deep and near vertical pistol grip. There’s a vestigial gripping hook underneath and a slim, fixed, rubber recoil pad with cross-hatched surface that really locks it into the shoulder. The length of pull (LOP) is a reasonably generous 14”. Up front, is semi-beavertail forend with a reasonable free-float right up to the reinforce. There are twin QD sling studs underneath, with another under the butt.

Controls are basic, with a cross bolt safety sitting in the front of the trigger guard, which pushes right to left to FIRE and reverses for SAFE, it will only function when the action is cocked. On that point, the guard’s bow is large enough for even gloved fingers, always a nice feature in the colder weather. The 10-round, rotary magazine shows an integral locking catch, that engages in the front of the well, just in front of the guard and to the right is the manual hold open. Due to the nature of the feed system, an automatic, last round hold-open function is not possible. Finally, there’s cotton reel type cocking handle on the right of the action. Annoying, is the fact that the A22 Magnum has a much bigger lever, which offers a lot more to get hold of. The one on this model works, but with a 22 semi, bigger is always better.

One nice feature of this rifle is the one-piece, six inch, Picatinny rail that’s included. It’s stepped at the font and can be reversed so that the step sits over the action cover at the rear. A bit different, is how the bolt comes out. The receiver stops about 1/2” after the end of the Picatinny rail and is replaced by a plastic cover. To strip, cock the action and set the safety. With an 1/8” pin punch, push in the plunger at the rear right and lift the cover up and back. This will expose the mainspring and guide, which is pushed forward and rotated through 90º left to disengage and then can be pulled out. The guide rod also retains the cocking handle, which pulls out. Finally, the bolt is pushed rearwards as far as it can go, and the rear is angled up to clear the cocked hammer and lifted out.

Given the height you mount your scope, as there are no iron sights, it’s possible to do this without removing the glass. However, it can be fiddly, as there’s little access. On reassembly, the bolt goes in first: slide it forward and push down until it locates fully. The cocking handle is next, ensuring the hole in its shaft is in line with the bore, so the nose of the guide rod can pass through and retain it. The spring/rod assembly is pushed forward and rotated down 90º, so it can lock into its cut-out. Finally, reposition the cover tab, end first, so it engages with the slot at the top rear of the receiver. Push it forward and down and, at the same time, insert the punch to move the spring forward enough, so that the cover clips back down and is retained by the rear of the guide rod.

One unusual build aspect of the design, is the fact that the action is retained by two Allen-headed bolts, with the front one coming up from underneath and screwing into the underside. The rear goes in from the top and screws into a block in the action void.

Importers, Edgar Brothers, supplied the rifle with 200-rounds of Hornady Varmint Express, 40-grain, plated hollow point ammo and also one of the new Bushnell Forge 2.5-15 x50 scope, with BDC, ¼ MOA turrets. A bit over the top for a rimfire, but with plenty of magnification to check accuracy. It will be on test fully next month. Finally, they included a Sirocco, muzzle-mounted moderator. I added RWS and Winchester 40-grain, sub-sonic hollow points and Hornady 40-grain, lead round nose standard velocity. Plus, the tried and tested Harris BRS bipod; always a winner!

The Accu-Trigger comes factory set at around 3lbs and can be easily and, more importantly, safely adjusted by an Allen key that goes in through the rear of the trigger guard. It also cannot be set too light, so reducing the risk of a mistake if you have not got your brain engaged. Its Glock-like, blade-in-blade trigger lever allows you to take up the slack and with just a tad of creep it broke cleanly. This double feel, as it were, leaves you in no doubt of what stage of the pull you are at. There’s a bit of bounce back as it resets, and I just maintained the pull until the action had fully cycled for a proper follow through. Filling the magazine is a bit of a chore, the loading aperture is L-shaped with the rim positioned on the right side, then pulled to the centre and pushed back and in. As it fills up spring tension increases making the job harder.

To load, push the magazine up into the well until it locks and cycle the bolt; conversely, you can lock the action open, by holding it to the rear and pushing up on the hold open catch, putting the mag in and pulling back on the cocking handle to chamber. Just note that with the action open, if the butt is bumped, the bolt will override the catch and close. Operation is by the simple, blow-back system; here the weight of the bolt and spring serve to keep it locked until the energy/gas pressure generated by firing overcomes its inertia. It seemed well-timed, as there was little gas and debris coming out as it ejected.

I was shooting in 5-round strings and the Pro Varmint proved to be a bit ammo fussy. Initial testing at 50 yards showed the Varmint Express to shoot 1.5” groups. Their 40-grain lead round nose load was printing between .75-1”, the RWS subs were worst at 2” and the Winchester 40 subs came in around the inch. What became apparent, was that the first round tended to step out from the group, with the other four grouping tighter. However, I only used four brands/ types, so experimentation would probably turn up something better.

On the plus side, the action was very reliable, with few stoppages (all ammo- related). Illustrating this, was the RWS sub-sonics, which are not quick and will not operate either of my 22 semis, but they ran sweet through the A22. Although you could tell by looking at the bolt speed it was slower by comparison. The stock shape and dimensions promotes good, general shootability, always a result.

For me, the Pro Varmint is too big and heavy, the fluting is cosmetic and the barrel six inches too long, for no good reason, as little seems to be gained from its extra length. However, if you favour a 22” tube, then it would be right up your street. Adding in the Scirocco moderator brings the length up to 48”, making it a bit unhandy from a vehicle. That aside, like the curate’s egg, the A22 is good in parts; find the ammo it likes and it could be a tack driver!