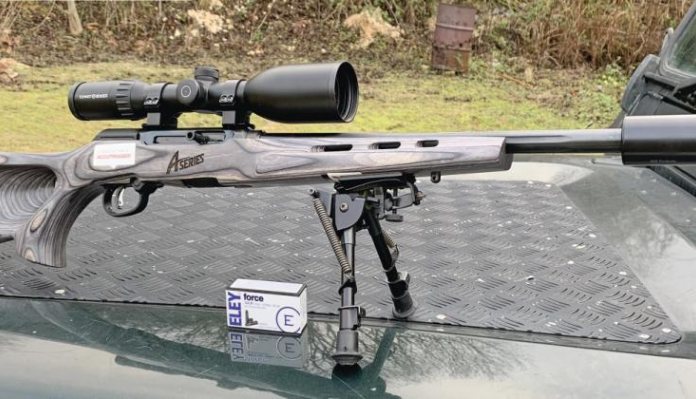 Since its introduction, I have tested three variants of Savage Arms’ A22 semi-auto rifle in both 22 Long Rifle (22LR) and 22 Winchester Magnum Rimfire (22WMR). In these days of the maximum use of aluminium and even polymers for building self-loaders, the A22 stands out as having an all-steel receiver. Compared to their early semis, which offered a single column, stick magazine systems and looked really low-rent, the A-series rifles have taken a leaf or two out of Ruger’s 10/22 book, with a rotary drum mag and a mandatory, manual, last round hold open. They have also added some much-needed curb appeal.

Although I was told by the importers that Savage offer a laminate, thumbhole (TH) stock furniture option, all the rifles I have tested to date did not show this more attractive and ergonomic layout. Instead, being either a basic polymer Sporterstyle, or wood, with a heavier, McMillan A5/target-like build. All rifles also had a 22- inch barrel, acceptable on a 22WMR, but a bit too much on a 22LR. To be honest, I never found the 22LR guns to be that accurate much past 50-yards, even with what are to all intents and purposes heavy, fluted barrels. So, I was surprised when yet another A22 turned up a few weeks ago, unsolicited.

When I saw the package, I thought: “Oh no, they’ve sent me a rifle I’ve already tested”. However, and much to my delight, what came out of the box was undeniably an A22, but in a rather nice grey/black laminate TH stock and mid-weight 16-inch barrel. Now, this was a lot more like it and very much more what the UK market would like and possibly buy.

Being a Savage, one of the good points of any A22 is its famous ACCUTRIGGER as standard. First appearing in 2002, it was designed to give the shooter a crisp and creep-free release with an adjustable pull weight from 1.5- to 6lbs that was easily set by the user and, above all, safe. The design has moved on a little bit since its inception, with the ability to now adjust it externally, rather than having to remove the action from the stock. It shows a Glock-type bladein- blade build that improves safety; also, you cannot set it too light, as it will go into a failsafe mode, which is reset by simply readjusting it.

Controls are simple, with a cross-bolt safety at the front of the large trigger guard; it pushed right to left to FIRE and reverses for SAFE, and will only function with the action cocked. Nothing earth shaking, but a proven and reliable design. The flushfit, rotary magazine is very Ruger 10/22-like, although scores in having an integral release catch at the front, which makes it so much easier to remove; equally, the rear plate is metal.

As I said, this feed system does not allow an automatic last round hold open facility, so the bolt will close on an empty chamber after the last shot, which is not ideal. Savage’s solution is simple and effective with a manual hold open catch that’s set between the trigger guard bow and rear of the mag well. Just hold the bolt fully open, push up the catch, hold it and release the bolt and it’s locked. Typically, it’s bounce sensitive, so if you carry it with a full magazine and open bolt, bumping the butt on the floor or similar shock will trip it.

The cocking handle, which reciprocates with the action is a longish, cotton reel type and is easy to operate. Savage fit a larger, extended version on their Magnum models, which is much better, pity they don’t do that for all the A22 range. The medium/ heavy (for a 22LR anyway) barrel is 16-inches long and shows a short, semi-fluted section in the middle. It doesn’t do anything but has a visual appeal. As standard, guns come threaded ½ x 20 UNF, complete with a steel protector.

The TH stock is in grey/black laminate and is made by Boyd’s and really looks the part and is by far the icing on the cake, cosmetically and practically. I like this layout and it doesn’t disappoint; with its large pistol grip and generous cut out, it offers a good hand position. Length of pull is 13.75-inches and the inlet is well cut and holds the action securely. The beavertail-type forend shows ventilation slots, not sure why, but it adds to the racy look and it generously free-floats the barrel and fills the supporting hand nicely and offers good support. The rollover comb/cheekpiece gives good head support and works well with the low, Weaver bases included. At the rear is a slim rubber recoil pad that locks the butt into the shoulder. QD sling studs are fitted; two up front and one at the rear.

There are a couple of build anomalies compared to other semi-auto 22 sporters. Firstly, the action screws; the front one goes in from the bottom of the stock as is normal, but the rear passes down from the top. Secondly, the method of stripping. The steel receiver shows a long, plastic rear cover which has to be removed so that you can unlatch the return spring prior to taking the bolt out. Once off, the bolt has to be angled upwards to clear the action and, if you have a low mounted scope, there might not be enough access to do so, unless you remove it first.

For the test, I fitted a Schmidt & Bender Zenith 3-12x50 first focal plane (FFP) scope in 30mm rings. Savage fit low Weaver bases, but on the longer barrelled 22LR Pro Varmint model they use a one-piece, Picatinny rail instead, which is by far the better option. Up front went a SAK Model 2 moderator; although muzzlemounted, it’s reasonably compact, although wider than most and suited the rifles lines nicely.

I went a bit overboard on ammunition, as I found some Eley fodder that I had been given some time ago and added it to my eclectic mix as follows: Eley Contact 42-grain Sub-Sonic semiauto, Force High Velocity 42-grain semi-auto, Subsonic Hollow 38-grain and High Velocity Hollow 38-grain, Hornady 40-grain lead round nose and copper plated 40-grain hollow point Varmint Express, Remington 38-grain subsonic HP, Norma Subsonic- 22 40-grain HP, RWS HP 40-grain sub-sonic, Winchester sub-sonic 42-grain MAX HP and finally MagTech 40-grain sub HP. A lot I know, but I got the feeling something there would prove this little carbine could shoot.

Filling the magazine is a little bit different; the first round goes in straight back into the feed lips, with subsequent cartridge you place the base/rim in the cut out to the right of the lips and push it across to move the first one round then slide it back. Trying to do this from the centre every time like the first one is not so easy.

The gun ran reliably enough, the most common stoppage was an empty case occasionally not ejecting but getting jammed up in the roof of the receiver. Most noticeable, was the amount of debris that came out with the case as the action cycled and also some slower speeds, well below quoted figures. I put these two down to a reasonably light main spring that does not keep the block shut at peak pressure, which is essential on a blow-back action such as this. The Norma subs did not cycle the action at all, which I know from past experience in other semis, so I discounted them. Accuracy was interesting, with some fodder shooting very tight groups and others not so much; see Rimfire Results chart, testing was at 50-yards.

Best accuracy target load was undisputedly the Eley Force (pity it’s a solid, round nose), and for hunter I’d go with Hornady’s HV/ HP, which also showed a good ES and would be my choice due to its extra 14ft/ lbs over its nearest rival, the Eley HV Hollow, which aced it by 0.1-inches on paper. However, the velocity spread across all the loads was massive at 286fps. I was mightily surprised by the Eley Sub-Sonic hollow HP, as I could not believe its huge groups and 182fps deviation from quoted to actual velocity. But in fairness, I reckon figures and performance would be better in a bolt-action, due to its locked and static bolt design.

Overall, the A22 Target Thumbhole vindicated itself and pleasantly surprised me, as I was not expecting what amounts to demonstrably better performance over its longer barrelled siblings. It looks good and feels good and, with the right ammo, is very capable. Out of interest, I took the Eley Force load out to 100m, where it shot as tight as my 17HMR Ruger M77/17 All-Weather. For that read ½-inch; impressive. It just needs bucket nosed hollow point to be perfect!