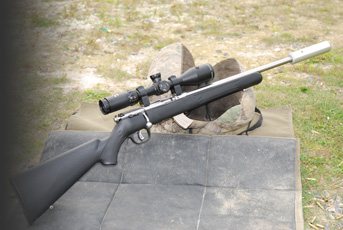 22 rimfire rifles are curious things and one aspect they all have in common is their ability to shoot tight groups from the box. It does not matter if it’s a top end Anschütz or some nasty, Chinese copy of a CZ 452 2E they can all do the job. This then is a most attractive feature; especially if you are terminally mean, on a budget or just looking for a tool to do the job.

With this in mind may I draw your attention to the Savage MARK II FSSTB stainless/synthetic carbine, which is pretty much an all-weather design. Far from the prettiest rifle in the world; it none the less appears to be tough and reliable with a number of excellent features as standard.

This example came with a 15 ¾” standard weight barrel, without iron sights and threaded ½ x 20” UNF. To be honest with the 22 Long Rifle cartridge this is more than enough tube so even with a moddy up front makes for a handy package. The stock is a simple, plastic moulding that includes the trigger guard. The forend is reasonably deep and hand-filling and free-floats the barrel, though there is not a great deal of rigidity there! The butt shows a low/straight comb and slim pistol grip, at the rear is a plastic pad. Panels of cast-in chequering are applied in the usual places and QD sling studs are fitted front and rear. Length of pull (LOP) is short at 13 ½” but I have to say I did not have a problem with eye relief.

The all-stainless action is the usual, simplistic tube design with a push-pull safety catch on the right – forward FIRE red dot exposed, rearwards SAFE red dot covered. This is easily operated by the firing hand thumb with little loss of position. The bolt lever is long and angled back slightly with enough meat on the ball end to allow easy operation. Savage now fit their excellent Accutrigger to all their rifles and the MARK II is no exception.

This design is easily adjustable from 2 ½  – 6 lbs and cannot be made unsafe, and in my opinion offers one of the best deals from the box on what is a standard rifle in every way. You will notice that the trigger has a blade within a blade, the inner is a safety feature and must be pressed first to allow you to pull the main one to fire. This is an automatic movement as your finger positions itself, but if for whatever reason the main blade is pulled first the mech goes into lock down and won’t fire. This could happen if stalking through heavy undergrowth and if it does all you do is cycle the action to re-set it.

Feed is from a 10-shot, single column magazine, not the prettiest of things but it does the job. The release catch is a simple, pressed steel plate at the rear of the well. Again its pull-back action is not subtle but it works.

Along with the Accutrigger and threading/proofing as standard the MARK II also comes with 1” bases fitted; again a nice feature. So all you have to do from the box is put a moddy up front and some glass on top. In keeping with the finish I chose an SAK 22 rimfire can from Jackson Rifles. I have used one of these for years on my 17HMR and still reckon it the best value for money around.

As luck would have it Highland Outdoors sent me the latest Nikko Stirling scope, the Laser King, which has an integral laser projector. This facility I thought would suit the short/mid range abilities of the 22 LR cartridge nicely - you can read a full report in the scope test section.

For the majority of hunters 22 LR = sub-sonic ammo and I used three examples; what Winchester, Remington and Eley. With a 50-yard zero shot prone off a rest the MARK II was printing ¾”, which was good enough for me. Feed initially was a bit rough but after a box or two of it smoothed up no end.

I took the MARK II bunny bashing and it did the job well. The 10-shot mag really pays dividends in the field, though I would buy a spare too. In this real time testing the Accutrigger made a huge difference to performance, as there was nothing to fight against and you knew that as long as the cross hairs were on the spot all you had to do was squeeze off the shot. My one negative comment is that the design has an undeniably agricultural feel about it! But that doesn’t stop it bringing home the bacon – well rabbits in this case…

Given the nature of the build I was initially surprised by the price! Importers quote £460 for this 16” stainless/synthetic version. Perhaps I’m being a little naïve, as you have to factor in rising costs in general, plus the Dollar to Stirling rate. However, to be fair this includes the Accutrigger, threading/proofing and scope bases as standard. So maybe not a bad deal after all? If you want to save yourself £95 then go for the standard length (20”) black/synthetic version, which retails at an rrp of £355. Likewise you can save £9 by getting the blued mag as opposed to the SS version!

The Savage MARK II is not that pretty and quite basic in what it offers, but it will do the job. Plus standard features like threading, mounts and the Accutrigger all add to its ability. If you want up market; this is not the rimfire for you! But if you want a decent workhorse then it’s well worth a look.