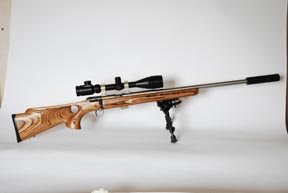 Though the first to admit that they work and represent good value for money, I have always considered Savage rifles ugly and a bit clunky. I can live with the centrefires, but the rimfires; well you could put ‘butt’ in front of the word ugly and you’d be about right! However, a few years ago the company hit upon an ingenious way of improving both looks and performance, when they introduced the 17HMR 93R17BTVS. So well received was this model that it got Outdoor Life’s “2006 Great Buy” Award and the U.K. Shooting Industry "Best New Rifle 2007". This also illustrates the down time between US products hitting their market then finally limping into ours!

The basic tubular receiver and skinny bolt remained, but made from stainless steel with a heavy barrel and dropped into a pretty decent, brown, laminate thumbhole stock. The rifle had the look of a varminter and shot very well indeed. I had to wait over a year to get one for review; such was the popularity of this model and I can see why. Wisely Savage has moved this build onto the 22s and you can now get the Mark II-BTVS in 22 Long Rifle.

The 22 LR version is no different from the 17HMR; barrel 21”, length 40” though according to the blurb the MARK II weighs 7.5 lbs as opposed to the 6 lbs of the HMR version, I can’t quite work that out. The layout shows a single-column, 5-shot magazine, 2-position rolling lever safety rear right of the action and a set of 1” Weaver-type bases are fitted as standard.

The stock is a nice piece of laminate and also a good design. The comb is high and straight so giving an excellent head eye/scope position. Savage has cut a channel in the top to allow the bolt to be easily removed. The thumb aperture is well angled and offers a big hole to put your digit through. At the rear is a slim rubber pad, less for recoil and more about shoulder adhesion.

The barrel is fully floated in the rectangular forend which shows vents in the sides. Probably more cosmetic than functional; it gives the MARK II a racey look! Like all current Savage rifles; be they rimfire or centrefire an Accutrigger is fitted as standard.

This is one of what I consider the US firearms industry’s greatest benchmarks. The Accutrigger is set at around 3lbs and offers a crisp and light release; it can be adjusted, but cannot be made so light as to be unsafe as it will go into a lock down position if this is attempted. Initially Savage only fitted it on special models but made the decision to make it universal. This then jump-started companies like Remington and Ruger to offers a similar feature, so improving guns across the board.

Like all of the makes of rifle that Garlands distributes – Weatherby, Sauer and Savage the MARK II comes threaded ½ x 20” UNF and proofed, which is a good selling point. For this session I fitted it up with the PES MM22 compact, stainless steel moderator, I have just started long term testing on this range that covers rimfires/22 Hornet (MM22), up to 6mm (MM6) and up to .300” (MM30) calibres and they are good. Ammunition was all sub-sonic hollow point and a cross-section of Remington, Lapua and Eley. Garlands fitted out the rifle with a Tasco variable scope.

There’s little doubt the MARK II feels great in the shoulder, as that thumbhole stock really sets you up for the shot. Likewise the Accutrigger, which I adjusted down to its minimum of 2 ½ lbs, though from the box it will suit most people. The gun was shot prone/supported at 50 yards and an average over the three brands gave a figure of .67”. Of the three the Eley Sub-sonic Xtras were the best, coming in at a solid ½”, with that heavy/floated barrel making all the difference; ably assisted by the Accutrigger. A nice touch are the two, forward, QD sling swivel studs that allow the fitting of a bipod further back if you choose.

The Savage action is a little industrial though reasonably smooth in operation, with feed and ejection being 100%. The 5-shot mag is a bit low on capacity, which for a rabbit buster is a bit vexing; especially in a ‘target-rich’ enjoinment, so you’d need the minimum of at least one spare; three would be better.  A look on Garland’s website shows that after-market, 10-shot clips are available; I’d get two if I was buying the MARK II!

What I do not like is the basic nature of the magazine release system! Made from a thin piece of sheet steel, it sits tight up behind the mag and has to be pulled back to drop the empty. This is an awkward movement and one not helped if you are wearing gloves. Which is a pity, as it detracts a little from the ability of the rifle in terms of handling.

I took the MARK II out for a few nights rabbiting and in terms of down range ability it’s right up there with other top brands. Though perhaps a bit heavier/larger than the more sporting 22 rimfires the Savage is still handy enough unsupported.

Overall what Savage have done to their basic 22 rimfire bolt-action rifle is good, the thumbhole stocks lifts it both practically and cosmetically. Likewise the heavy, stainless barrel and action adds not only to accuracy potential but also to the look of the MARK II BTVS. On reflection I could live with one of these, though I would invest in a couple of 10-shot magazines. But what you are getting for the money is pretty damn good none the less.