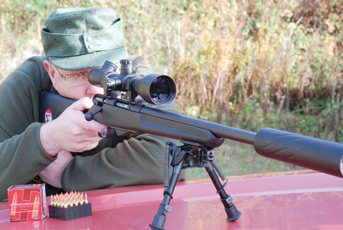 So it’s finally here the new Hornady 17 Hornet and its current launch platform the Savage Model 25. In the UK 17 centrefires have not been a success, with the 17 Rem having a brief burst of popularity, likewise 17 Remington Fireball, both then dropping down the charts quickly. Main reason being too wind-affected and cleaning fussy for the average shooter. These days if you are talking .17” then it’s HMR!

However, the new 17 Hornet might be different as it’s a sort of super HMR that to a degree could bridge the gap between the 17 HMR and 22 WMR and the 22 centrefires and probably out perform the original 22 Hornet too. The case is in essence a 22 Hornet with a less tapered body and necked down to .17” so giving a proper shoulder to headspace on.

The 22 Hornet has a varied reputation for accuracy, which in the main is down to its rimmed case, which and depending on bolt/chamber dimensions and ammo manufacturer can give headspace problems. I have shot rifles that could not group, whereas others performed well. The 17’s proper shoulder should solve all that. Initially I thought why not make it rimless and still do! However it could have been done to assist manufacturers; as if you make a 22 Hornet rifle then the bolt face remains the same and you just need to re-barrel and maybe tweak the magazine for the 17!

The 17 Hornet is another collaboration between Hornady and a major rifle manufacturer, with Marlin and Ruger already on board Savage stepped up to the plate with their Model 25 Light Varmint series. There are also rumours that CZ and Ruger will be chambering up too.

POWER AT THE POINT

Before we get our hands dirty what does the 17 Hornet offer? The only ammo currently available is the 20-grain V-MAX, which runs on Hornady’s Superformance powder. They quote an impressive 3650 fps/592 ft/lbs, with felt recoil being like a 22 WMR, along with reduced bore fouling issues. I have been told that 25-grain loads in both V-MAX and HP will be coming and I picked up a snippet about a 15.5-grain NTX (non-lead) too.

In essence it’s an entry level fun/varmint round with Hornady showing a possible effective range of 500-yards. At that distance the 20-grain is doing a quoted 1383 fps/87 ft/lbs, which is slightly more than a 17-grain HMR produces at 200 at 1389 fps/73 ft/lbs. However, that’s a long way for that light 20-grain pill that is down to 30% of its launch speed. I’d say that 300/350-yards is probably its effective ceiling! Dies and components and data will soon be available so reloading is an option, just get a very small powder funnel…

Savages Model 25 Lightweight Varminter series are all based around a basic rimfire-like action with centrefire aspirations. The build consists of a long tubular receiver with front and rear 1” bases, a 3-lug bolt with plunger-type ejector, detachable 4-round magazine and a simple push/pull safety located rear right. The bolt handle sticks out a lot and the stock is fitted with an Accutrigger, but there is no AccuStock.

There are three options – Walking Varminter, 22” barrel and black synthetic stock, Lightweight Varminter and Varminter-T. Both have 24” tubes and brown laminate stocks; the latter T offers a thumbhole. In all cases the barrels are medium/heavy in profile and give a slightly nose-heavy feel. All come threaded 1/2x20 UNF with collar.

Importers Edgar Brothers Ltd currently have only got the Walking Varminter and say the Lightweights are coming, I hope so as that synthetic stock is nasty! That may sound harsh, but having used the laminate guns, I categorically would not buy the plastic version! They have also hooked up with Riflecraft who are supplying the new Hardy Gen IV reflex moderator specially made for the 17 Hornet. Edgars will be selling packages with rifle, rings, Weaver Kaspa scope and moddy.

The rifle is well proportioned with a decent length of pull, but the pistol grip is skinny and the trigger too near to get a comfortable first pad position. However, the AccuTrigger, which is a blessing offers a good readable release, mine broke at a sweet 2.5 lbs and is easily adjustable with no fear of getting it wrong.

With its 22” tube it’s 41.75” from butt to muzzle and weighs a surprising 6.9 lbs, most of which is up front. The Lightweights with an extra 2” of tube and heavier stock probably tip the scale nearer 8 lbs.

The forend is very flexible, so much so that you can pinch it between forefinger and thumb and hear the barrel bashing on the plastic, which is not a recipe for consistency. The Lightweights shows none of this as they are solid up front and give a true free-float tube. If ever there was an opportunity for an enterprising custom stocker to make some money replacing that black plastic with decent timber the Walking Varminter is it…

I shot the gun from both bag and bipod, of the two the pod proved more consistent as the forend pressure and bearing is in one place only. Off the bag and depending on your position this can vary.

I fitted up a Leupold 4.5-14x50 LRT scope in Nightforce rings. It was then I noticed that the bases are quite far apart and offer little leeway for adjusting eye relief. With the LRT I had less than ¼” of movement. Better would be a longer, one-piece rail. Bolt lift was heavy so much so that in the shoulder the rifle rolled to the left. This did ease up a little, but why not sort it at factory? Feed is from a 4-round polymer magazine with the release catch at the front. I had feed problems with rounds tipping as they entered the chamber extension and stopping the bolt. I had to pull it back ¼ - ½” then push forward to sort it! Edgars supplied another mag, which did not make a real difference. But the more I used it the better it got, as initially I was getting two to three per mag, now it’s one or two with less frequency.

The heavy bolt lift, intermittent feed problems and synthetic stock makes me feel that the Model 25 is a real budget build, which is at odds with its heavy barrel, good trigger and accuracy potential. As a launch vehicle for a new calibre the Walking Varminter is not ideal and does the 17 Hornet few favours. Which is annoying as I have never had any issues with build quality, reliability or shootability with Savage rifles before!

However, it had a good trigger and the barrel that looked like it could shoot! Which it can with average groups going to ½” with occasional ¼” clusters. Recoil as Hornady said is nothing and with the Hardy Gen IV on it’s really quiet, with a distinctive signature that does not sound like a centrefire or a 17HMR.

I put the group fluctuation size down to the overly flexible forend and reckon the laminate Lightweights will cure this. The heavy barrel is probably its salvation, as a lighter tube would suffer more! Like the HMR there’s no doubt the 17 Hornet has huge accuracy potential.

Over the chrono the Hornet was giving an average speed of 3598 fps/581 ft/lbs, with an impressive extreme spread of just 10 fps. From the 22” tube that’s just 52 fps shy of the factory quote which ain’t bad at all. I reckon the 24” Lightweights are going to be bang on the money!

I am winding it up here for this month as testing issues really depleted the 100-rounds Edgars sent me. I have asked for another 50 then I will take it into the field to see what it’s capable of. As to the 17 Hornet’s potential use I am not so sure, its doubtless a great calibre for specific tasks where vermin destruction is the goal, but I reckon body shots are going to be overly destructive if you’re shooting for the pot.

I have my doubts on its effectiveness on foxes at longer ranges. It does however offer a more powerful and longer range alternative to the 17 HMR, 22 WMR and the 22 Hornet. Below are Hornady’s figures on the two Hornets out to 500-yards in 100-yard increment in velocity and energy. I have a CZ527 in 22 Hornet on hand and will also try them back to back in the two next months.