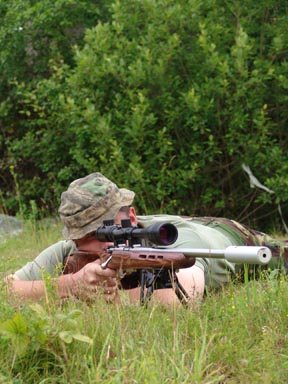 I say this from the outset – Savage rimfires are not the prettiest of rifles but they shoot as well as other makes. However, in a world of choice, cosmetics and looks are still important considerations, especially if you have a few hundred quid burning a hole in your pocket.

In the reasonably new world of 17HMR (Hornady Magnum Rimfire) rifles, I made my choice long ago and have not regretted it, as I have for the last five years owned a Ruger 77/17 All-Weather stainless laminate. I picked it for two reasons; 1. I liked the way it looks/handles as it has that fullbore feel about it, and 2. it has the highest standard magazine capacity (9-rounds) of any comparable 17HMR offering as it does a 30-40% payload advantage over other makes. On the down side at 24” the barrel was way too long and I had it cut back. I also had to fit a replacement trigger, as the factory pull was not as light as I liked.

Most of the big manufacturers wasted no time in coming out with their own 17HMRs, with Savage being no exception. They offered a range of standard-heavy barrelled guns, which in terms of performance were probably as good as my Ruger. But I found them a bit too homely and clunky for my liking. The nearest model that came to it was the 93R17-BVSSTB with its grey laminate stock, stainless finish and decent medium/heavy barrel, which offered good performance and at a reasonable price point too. But I would not buy a Savage!

It was at the 2006 IWA Show that I first saw Savage’s latest 17HMR - the 93R17-BTVS and boy was I impressed. Though the rifle is the same chassis at the BVSSTB, but in polished stainless, it shows a beautiful, brown laminate thumbhole stock. By this time, and like all other Savages, the BTVS was fitted with their AccuTrigger and is something we should all thank them for. This offers a very decent, adjustable and 100% safe pull from the box and has obviously influenced other companies like Ruger and Remington to do the same. So these days shooters are getting better performance without having to pay extra for it.

Add to this that the importers Garlands now thread (½” x 20 UNF) and proof all their Weatherby and Savage rifles regardless of calibre. So that’s two less things to pay for. Plus the BTVS offers a 21” barrel as standard, which is a good length and one you can leave alone for all the difference it will make.

I’m a sucker for thumbhole stocks and I’m not sure if the BTVS’s is bought-in or made in-house, probably the former. But whatever, it’s a nice piece of work with a decent length of pull at 13.75”, a rubber butt pad and a ventilated, semi-beavertail forend that free floats the barrel. The actual thumbhole channel is generous with a large scalloped out section on the right, which allows the hand to sit directly behind the pistol grip, which gives a comfortable position. Combine this with a high comb and roll-over cheek piece, and you have what I consider a near perfect head position and firing platform.

With twin QD sling studs up front and one at the rear, plus all the metalwork in stainless including the magazine and 1” dovetail bases fitted as standard, you have a very nice looking and practical package. Apart from making the gun handle and doubtless shoot better, the addition of the thumbhole stock takes the eye away from the rather basic looking tubular receiver and scrawny bolt. Rack the BTVS next to my Ruger All-Weather and no ones going to say that the Savage looks clunky… In this configuration I now like what I see and would certainly consider this rifle if shopping for my first 17HMR.

However, it was not until over a year later that I finally managed to get my hands on a BTVS. Speaking to Jamie Garland (Garlands Ltd) indicated that as ever the US and world market got the priority of this new model, and those numbers that did come in to the UK went out the door fast too. Obviously it was more than just me who liked what they saw…

My example came with an SAK rimfire/airgun moderator, possibly one of the best and cheapest 17HMR cans available today and a Tasco 6-24 x 42 IR/AO varmint-type scope with Mil-Dot reticule. Ammo went to Hornady 17HMR in both 17 (V-MAX) and 20-grain (JHP) loadings and some Remington 17-grain ballistic tip too. I have to say that I was not expecting any dramas and I was correct, as we shall see the BTVS can nail those 100 yard groups as good as my Ruger…

The action is quite basic with a plain tubular receiver and simple bolt mechanism. However the lever is long enough to give easy operation with very little disturbance of the firing position when cycling the bolt. The lift angle is low enough to cope with most heights of scope mounting.

The safety is a push/pull lever located on the rear right of the action. Smooth to operate it pushed forward to FIRE (red dot exposed) and reverses for SAFE. Sensibly, when on safe, the action can still be cycled. It is perhaps a bit far forward and whether using your trigger finger or thumb you do have to break your firing grip to use it.

The Accu Trigger is excellent and offers a really decent pull from the box. Savage says it can be adjusted from 1.5-6 lbs and it also can’t be made unsafe either, which is comforting. My example broke at around 2 lbs, which is a good weight for a hunting rifle, certainly with a calibre that offers such high accuracy potential as 17HMR does.

The trigger lever looks a bit odd as it has a Glock-style safety blade inset, which must be taken up first to complete the pull. There’s no real effort involved in this first step, which then goes into the actual break, which is crisp and short. If for any reason the side of the lever gets accidentally moved, as might happen if it were snagged by a branch or careless finger, then the whole mechanism goes into a failsafe mode and locks up and can’t fire. To reset it just cycle the action and you’re ready to go again.

What I hate on all Savage rimfires is the magazine release catch. Essentially it’s a bit of thin/bent metal at the rear of the well that pulls back to release the 5-round clip. OK it works and the mags drop away cleanly, but it’s just horrible! Sorry but there it is! On that point the magazine locates at the rear by a vertical tab that engages with a slot in the rear of the body. But you can forgive the BTVS this as it has a great stock design and decent trigger and if you can consistently place the sights on target and pull through without moving them of the mark, then you’ve got an accurate rifle…

Tipping the scales at 6 lbs (un-scoped) and with an overall length of 39.5” what looks like a big and heavy rifle for a rimfire, is in reality not so. OK perhaps it’s a bit more than some other 17s but even with the Tasco on board it’s easy enough to handle and also walk with. So slick action, nice trigger and great layout, how does it shoot? In truth that’s a bit of a no brainer, as the answer to that is ½”.

Fitting a Harris BRS bipod in the second QD stud position I shot the BTVS with a Holland Field Bag under the butt for zero at 100 yards. Soon I was picking off fragments of broken clay pigeon at this distance and felt I would have had no problem head shooting a bunny or hare either. Getting sensible I went for a group and as expected the Savage was turning in ½” as does my Ruger. Like my 77/17 I would confidently push the BTVS out to 150/180 yards.

Really there’s little else to say – the rifle works and works well, and can shoot good groups. The stock layout is brilliant and items like scope bases as standard, the excellent Accu Trigger, and coming threaded and proofed in the price, has already saved the potential buyer well over £100. For that I can live with the magazine release and basic looking action… So what do I think of my Ruger now? Well it’s still the gun for me, but I’m already looking round for a thumbhole to drop it into!