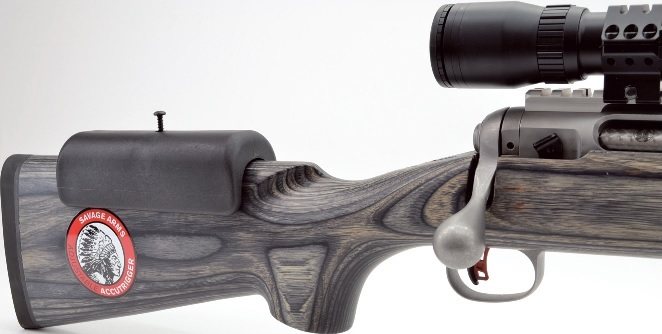 I have wanted to get my hands on one of these for ages. This gun is the epitome of what Savage seems to do so well – observe the developing rifle markets and produce guns that specifically fit evolving disciplines and competitive rulebooks. The Model 12 F/TR is Savage’s suggested route for direct factory rifle ownership to suit this rapidly growing sport on all continents. Available in two F/TR calibres, 223 with a 1-7-inch twist rate and, on test, a 308 Winchester in a 1-12-inch which had my name written all over it!

What differentiates a capable FTR rifle from any other .223 or .308 is predominantly barrel length. To achieve reliable supersonic flight all the way to 1000, possibly even 1200 yards, barrel inches really do matter! Although the twist rate of the 308 on test is pretty standard for the calibre, the 1-7-inch of the 223 is required to stabilise bullets in the 80-90gr category that will be capable of holding their own against 308, when launched at similar velocities.

The 30-inch barrel’s muzzle has a recessed 90° crown, 0.940-inches in diameter. It grows in a straight taper to 1.250-inches at the action and is finished, like all the metalwork, in a satin bead blast. The action face shows the familiar cannelured Savage barrel nut to allow future barrel change with twin gas escape ports broadside the bolt recess. A stout recoil lug is sandwiched here too.

Floating on a Bellville washer assembly, the twin lugged bolt face with a plunger ejector and diminutive extractor claw inlet into the right/lower lug’s face. Behind this we see Savage’s characteristic secondary lug pairing, also floating to promote bolt face alignment, and should a calibre change ever be desired, easily replaced if bolt face alternatives are required. The stainless shaft is engineturned for slick appearance and handling with the satin finish returning at the rear for shroud collar and a 3-inch handle, tear dropped to a 0.93-inch sphere.

Four threaded holes top the action for a full-length Picatinny rail to be fitted on the otherwise solid bottomed tubular single shot action. A 3-position tang safety sits to the rear of the bolt for easy thumb operation. It gives forward – FIRE, middle – Safe with bolt operation and rear – SAFE bolt locked.

To the right side above the trigger is a lever to depress in combination with the trigger for bolt removal, it also indicates a cocked action. Accutriggers are a bit ‘Marmite’ but the one fitted here is an ideal partner for the gun. Showing the red internal blade to identify it as a target rather than hunting model, it broke crisply at 12oz. I really liked it, as it gives a mass market take on safety yet with the light weight required for a through-and-through target gun.

Three action bolts seat the gun in the laminate stock with an 11-inch accessory rail terminating the forend 18-inches from the front of the trigger. The furniture is smoothly finished throughout and the open radiused grip follows the lines of a hunting rather than vertical target type. A 13½-inch length of pull (LOP) finishes with a solid recoil pad ¾-inches thick on a plain black spacer. The comb initially seems quite low and two plastic cheek raisers are provided that screw into place if desired, but I really don’t see the point on this rifle; they look ugly and leave three small and unwanted holes in the comb. The stock is otherwise very plain and straight, streamlined in fact to allow the gun to work in tune with a rear bag. The taper on the underside of the butt offers approximately 2½-inches of elevation adjustment and the machining of the stock is totally straight with the axis of the bore truly parallel to the external bearing surfaces of the rifle. This keeps it tracking the bags straight! Three slots are applied to the forend either side of the fully floating barrel, I don’t really go with the cooling aid theory but they do add a beneficial tweak to visual appeal.

All the Gear and Some Idea

Edgars Brother supplied a set of Weaver 30mm low rings and Bushnell Elite Tactical 4.5-30x50 scope to suit. This set up kept the 50mm objective close to the barrel. I was in a hurry to get the gun shooting as I had a 1000 yard FTR shoot at my club less than 48 hours after receiving it. Could I sort out some ammo and would the gun shoot, virtually out of the box?

I looked into the popular ammo options for F/TR usage and took some Sierra 155gr HPBT bullets and Berger 185gr `Juggernauts` to the range loaded into virgin Lapua brass with Fiocchi primers. Powder went to Ramshot and I hedged my bets with four options, using TAC and Wild Boar to ladder test both projectiles from SAAMI standard 2.810-inch OAL specification.

All the combinations performed straight away! The 185s generate a little more recoil, and when shooting a long range gun control of this force is paramount to avoiding vertical stringing. I was drawing most of the 185s within ½-inch at 100 yards but couldn’t help occasional vertical stringing.

I seemed to find the accuracy more easily with the 155s, with solid round `blobs` appearing in the target. I thought I would take the easy option and go with this load of 45.7 grains of TAC, generating 3145fps. It just plain worked, was easy to shoot and the figures on paper led me to believe the small groups hovering tantalisingly just above 0.25-inch for 3 shots would fly happily all the way to 1000 yards without dwindling into the deadly transonic speed region.

Extreme velocity spreads of 15-20fps in any of the loads looked positive and when I checked I could wind the required elevation onto the scope I was rewarded with 32 remaining MOA available for the 26-28 I was likely to need. The 185s would without doubt resist the wind better but at 2737fps average, a little slow to be competitive with this particular powder choice.

At 1000 yards my first sighter in the 3 ring pleased me no end, but conditions were difficult and although I didn’t score very well I held my ground; but most importantly I really enjoyed shooting the Savage. I’d fitted one of Dan Pohlabels ‘flex’ bipods which anchored the feet solidly, my anti-cant bubble didn’t drift off line for the entire 22-rounds and all that was required was gentle shoulder pressure into the rear bag for small elevation tweaks and adjustment.

Recoil was light and delivered in a straight line along with the tracking in the rear bag, as I wanted it to – only my shoulder and trigger finger touched the gun. I really like the Accutrigger for this. You can gently find and take up what is effectively first stage pressure. Then your fingertip meets the metal blade all calm and relaxed, ready for that tiny increase in pressure to break the shot in complete control.

Ejection was smooth, but primary extraction was a little on the weak side, requiring a definite pull on the bolt to dislodge it rather than just sliding it back. Bolt lift force didn’t seem to disrupt the gun’s position; I attribute this to the Flex bipod being so laterally stable yet flexible on recoil. It’s a bit like shooting from a pedestal rest with a full F-class gun, a nudge from the shoulder returns the gun to `battery`.

Scoped up with bipod etc., it weighs 7.6kg, so comfortably within the strict 8.25kg limit for its class, and I was left with only a single negative thought about the gun: they could have extended the forend a little! However, while it wasn’t desperately needed, why not when there is weight to spare to increase the wheelbase? Well, stock blanks get a lot more expensive when they get longer, so there is your answer I suppose, Savage can’t please us all!