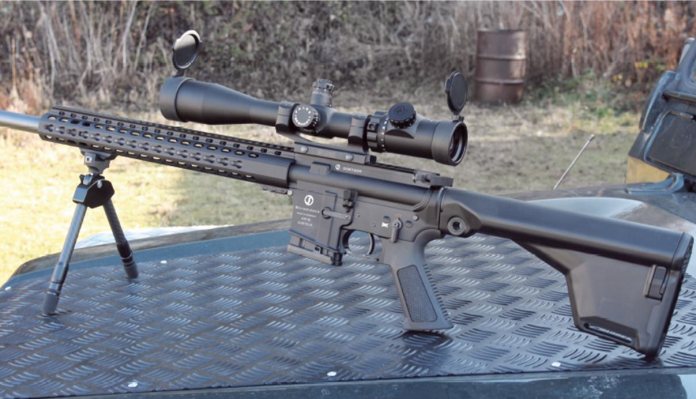 I first came across the name Schmeisser in relation to modern made AR15s a few years ago. It’s quite clever linking that iconic name with what is still proving to be the world’s favourite military and civilian self-loading/selective fire rifle. Attesting to this is the fact that major weapons manufacturing companies like SIG and Heckler Koch are producing their own versions. Last year at IWA, I was asked by RUAG Ammotec UK to speak to Schmeisser about a UKlegal version of their AR, which proved quite interesting! The main reason being that, by law, we need a manually operated option, which did confuse one of their tech guys a bit; as I tried to explain that side-cocking would be a near mandatory feature for efficient and reliable operation.

He kept saying that the T-handle worked well enough and I replied yes, maybe so, but sidecocking is the more practical option, but I got the feeling he was not for compromising, for what would be, in Schmeisser’s eyes, a small production run. I reported back to RUAG and they confirmed my impression.

So, initially a bit of a pickle; as for the brand to succeed in the UK it is up against a sidecocking majority. Practically speaking, a T-handle gun is slower than a side-cocker, which is easier and faster to cycle, plus copes less well with hard primary extraction, which can be an issue given the ammo you use.

But it’s my job to test the product I get and Mark Swift (RUAG’s MD) sent me an Ultramatch 20 to play with, along with a new scope brand that they are importing from Falke, in this case a 4-16x44 Tactical. A look at Schmeisser’s website shows a choice of 14 rifles, from a 14.5-inch M4 up to a 24-inch heavy barrelled design with options on barrel length, material and rifling twist that includes both civilian and military-style designs. All rifles are chambered in 223 Rem/5.56 Nato only and curiously all carbon steel tubes are in 1-9- inch twist whilst the stainless is 1-8-inches. This even applies to the same models; for example, my tester was a carbon gun in 1-9, while the identical 20-inch STS (stainless) is a 1-8-inch!

Given that practical-style use is not the only thing we Brits use ARs for, as a well-built gun can be a real tack-driver for target and even varmint shooting, the Ultramatch seemed a good choice, as it proved to be a very competent rifle! The receiver halves are made from forged, mil-spec, 7075 T6 aluminium, with a tribological hard coat anodising. The upper is a flat top with a Picatinny rail as standard, the military style models all have AR15 iron sights with the now common, detachable D-handle at the rear and depending on model, you get either a telescopic butt or their fixed A4-type

All the normal places

Upper and lower receivers are standard weight, with the former showing an ejection port cover, flat-top Picatinny base, case deflector and forward assist along with an extended, ambidextrous charging handle. The latter has ambidextrous safety catches marked with FIRE and SAFE pictograms. The standard mag button is on the left and the trigger guard has the old, fold-down plate to allow easier gloved access. The trigger offers a 2-stage pull and breaks at a quoted 5.3lbs, which felt a tad firm. The furniture consists of the A4 butt, which is a fixed design and differs from the earlier A2 by having a more club foot shape that offers a gripping hook, which is good for prone/ bipod use. It also has a roll-over, ambidextrous comb too, which gives just a bit better head/ cheek support. Rifles come with a 10-round magazine as standard and unusually there’s a second, spare 10-rounder stored in the butt trap!

The pistol grip is medium slim, with no finger grove but with an infill strap at the rear like the Magpul MIAD design, so offering a good hand/ trigger finger position. Up front is a 15.3-inch, slim-line, hardanodised, aluminium free-float forend with K-Mod slots; at 12 o’clock is a full-length Picatinny rail and a separate, shorter length is supplied that can be fitted as required. The 20-inch carbon steel barrel is a heavy build with a one-inch O/D with a 1-9-inch twist rate with a rebated muzzle profile and is not threaded. The whole rifle weighs in at 9lbs un-scoped and measures 38.2-inches butt to muzzle. Though a bit nose-heavy, it’s stable when shooting unsupported and of reasonable size. Overall, a professional job and generally pleasing to look at and handle!

I tested with three brands of ammo; the 69-grain Sierra BTHP Match King reload I use in my SGC Speedmaster, straight-pull AR15, Hornady’s 75-grain BTHP TAP factory and for the light stuff, Winchester’s Varmint-X, 55-grain ballistic tip. As I did not have a Harris bipod adaptor for the forend, I used Spartan Precision’s Picatinny Adaptor on the K-Mod block and fitted one of their Javelin Lite bipods. Unlike the Harris BRS, weight gain was negligible on what is a heavy rifle already. The Falke 4-16x44 scope went into a Warne one-piece base.

The Scope showed a 2nd generation (round) Mil-Dot reticle in the 2nd focal plane, all very standard stuff! Though they had also put a dot in the centre, which does not give such a precise aiming point as a cross! Turrets were 1/8 MOA clicks and they have locking caps on top, which I do like on a tactical-type optic.

Familiarising myself with the rifle initially showed that the forward assist tends to get in the way slightly of the right hand fingers that operate the T-handle and it proved best to re-cock from the left using the weak hand. There’s certainly more to get hold of than when doing the job with the standard smaller unit I have on my Speedmaster, not that I use it, as this rifle is an ambi, side-cocker.

Given it looks like the writing is on the wall for high capacity, centrefire magazines (certainly in Europe) then Schmeisser’s decision to go with two 10-rounders makes some sense. Saying that, they are identical to standard AR mags and the rifle will accept 20s and 30s too! I did find the cartridge overall length (COL) internal gap a tad short and that twin groves had been machined in the front, inside face of the mag box to suit. So, I’d recommend you check your COL to see how it works.

First up, primary extraction, and I’m pleased to say that it was not a problem, certainly compared to some other T-handle ARs. But then again, chamber quality, as to finish and dimensions, also plays a big part, which indicates to me that Schmeisser have got it right! Though as expected, the heavier 75-grain loading occasionally gave a slight hesitation, due no doubt to the bullet weight creating more pressure. But it was just momentary and not the solid stop and heave that indicates a serious problem!

Starting with my 69-grain load, it was shooting around .75-inches, which was a tad bigger group than my 1-8- inch twist Speedmaster. The 75-grain TAP dropped that to 0.5-inches and the 55-grain Varmint-X opened up to around an inch. The trigger was OK but could have been better, with a slight take up then that 5lb break, which you really had to learn to get the best out of the rifle. In fairness, the barrel was new and I reckon a couple of hundred rounds down would have improved things a bit. But slicking the mechanism or a new, match-style trigger unit would be a good investment.

To be honest, I would always pick a side-cocking AR, but that is not to say Schmeisser’s T-handle did not work, as it did and well beyond expectations too! The rifle and its heavy, 20-inch tube has some serious accuracy potential and is reliable in operation. However, I would like to think that Schmeisser might consider a side-cocking alternative too, which would mean machining off the case deflector and forward assist, along with slotting the receiver and removing the ejection port cover. We shall see! Pricewise, the Ultramatch 20 will give you a bit of change from £2000, which is good for a rifle of this build spec.