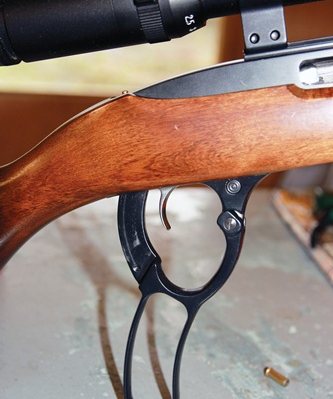 I have a stock of common calibre rifles for ammo testing and other uses, but up until a month ago I did not have a 22 Magnum (Winchester Magnum Rimfire) and had been thinking about adding one. Quite by chance I met an old game keeper who was retiring and getting rid of his rifles, one of which was a Ruger 96/22 M (22 Magnum).

There’s little doubt that the Americans are in love with lever-action rifles with Winchester and Marlin being the two major players. They are popular in pistol calibres like 38/357 Magnum, 45 Colt or 44 Magnum and good, close range, brush hunting tools for deer and feral pig. Ruger decided to get into this lucrative market with a lever-gun of their own.

However, typical of them, they decided to do it their way and came up with the Model 96. Looking like a 10/22 major differences were the more curved rear of the receiver, internal hammer and the obvious lever system. Offered in 44 Magnum and three rimfire chamberings – 22 LR, 22 WMR and 17 HMR they used the same rotary magazines as the bolt-action and semi-auto Ruger’s in these calibres. The only exception was the 4-shot clip of the 96/44, which was not the same as their bolt-action 77/44.

Anyone familiar with a 10/22 would have no problems operating the 96 as the cross bolt safety is at the front of the trigger guard with a similar though longer, push-up mag release at the rear of the well. Iron sights are identical with a fold-down rear U-notch and a windage-only blade up front. My example was not threaded, which would require the front sight to be removed and the boss turned down. Two slight differences are a cocked action indicator pin at the rear of the curved receiver and the usual, small 1⁄2” scope rail that does not use the same screw spacing as the 10/22 (annoying). The 44 was better as it had an all-steel receiver, logical really, complete with an integral rib that accepts Ruger’s dedicated scope bases.

The beech stock shows a very short length of pull (LOP) and the familiar shiny plastic butt plate. I paid the princely sum of £125 for my example and it was in reasonable condition and came fitted with an old Pecar scope. The previous owner had bodged a butt extension with green tape and an old leather, slip-on pad. As luck would have it I had a proper, Mini 14 rubber butt extension, which solves the LOP and slippery feel problems.

The 22 Magnum version feeds from the same, 9-shot magazine as Ruger’s 77/17 and 77/22M bolt-actions. The locking uses a pull-down bolt not dissimilar to the old Savage 99C centrefire lever-action. The bolt locks at the rear with a steel insert into the aluminium receiver. The operation is smooth and reliable, but the trigger is heavy! I’d say a minimum of 6 lbs and a graunchy pull and break at that. There’s not a lot you can do apart from take it to a gunsmith as none of the 10/22 or 77/22 drop-in trigger kits will fit, nor will any of the extended mag catches. Another strange anomaly is the fact the mag catch will not work unless the lever-action is slightly opened.

Overall the 96/22M is a handy rifle with its 18.5” barrel and 37.25” length at an easy 5.25 lbs. In terms of lever-actions it was quite a step forward with its detachable magazine over the more traditional Winchester 94 and Marlin 1894 tube-mag designs. It was produced from 1996 to 2009 and was not overly successful.

I think where Ruger fell down was in not offering it in other centrefire calibres like 357 Magnum or 45 Colt. Equally the low, 4-round magazine capacity of the 44 Magnum version did not help, I assume they only saw it as a hunting carbine. Their thinking probably based on their successful Deerfield autoloading carbine in 44 Magnum. In 357 with say a 10-shot clip the 96 could have been quite the thing and would have gone down well in the UK post the handgun ban. In 22 Long Rifle it could also accept the 25-round banana mags like the Butler Creek or later Ruger BX25.

Overall a better mousetrap that was way ahead of its time in some ways, but one that was not properly thought through, with ease of production outweighing proper product research.