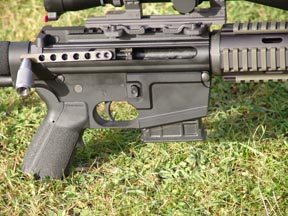 I don’t know about you but my shooting life is full of shouldn’t haves. And over the years through complacency or flawed logic, I have managed to sell a lot of guns that I now regret. And though mainly a hunter these days, I want to re-establish the enjoyment I used to have on the range punching paper. So, I’m starting to re-acquire some of the more fun-orientated items I used to own.

And one gun I’ve had a serious love affair with over the years is the Colt AR15. I saw my first M16 (military version) in 1969 and have owned and shot them ever since in both self-loading (pre-1988) and straight-pull (post-1988) versions.  Enter Bob Clark owner of The Southern Gun Company (SGC), who in my opinion makes the finest straight-pull ARs available today, which he calls the Speedmaster.

I like these as from day one he offered an ambidextrous, side-cocking action as standard, which is the only way to go with a manually-operated system of this type. He has been refining and improving it ever since.

My final AR was a sweet, 16” carbine, which I sold.  Boy what a mistake. Suppressing my desire to replace it for nearly three years, I finally cracked a few months ago and in keeping with my new policy decided to order another.

I had learned a few lessons since my first AR so had some definite views on the build I wanted, particularly considering this rifle would be used for fox control as well as range work. In the past I’d had all manner of guns from carbines to fat barrels, you name it I’d tried it. So this one would deviate a little and be less classic and more practical, though as with guns of this type the urge to accessorise is strong and also well catered for.

I started off with the Mk III upper receiver with flat top scope base, which has the integral left hand cocker and the new angled-down, dog leg cocking handle on the right attached directly to the bolt carrier. This offers fast positional shooting and good weapon support (right cocking) and prone off a bipod, serious shootability and firepower (left cocking). Bob has recently re-designed the lower receiver in a heavier/stronger build, which he calls the Mk V. This has really been done for another project, but the spin off is that if you want a really solid lower, which will offer greater strength and stability, it’s available.

I went for a Douglas, 20” H-BAR barrel, my reasoning being that this medium/heavy build would offer a good compromise between accuracy, performance and handling. As though primarily a fox/range rifle I wanted to ensure that the rifle could produce a minium of 1100 ft/lbs of energy to make it roe/muntjac legal if the law changed in England and Wales as to the use of 22 Centrefires on the smaller deer species.

Threaded ½ x 28” UNEF I opted for a muzzle brake and a moderator, so I could use it at night for foxes (moddy on) or on the range (brake on). I went for a rifling twist of 1in 8”, which at the time struck me as sensible.

With the barrel/action sorted it was now time to consider the furniture. Obviously I would have a free-float forend and initially decided on a standard alloy tube. It then occurred to me that an accessory rail or two might be wise, as I wanted a forward pistol grip and maybe even a gun light. Cruising the web I found a company called RB Precision who makes the Evolution 10/22 stocks for South Yorkshire Shooting Supplies.

An e-mail later and a Yankee Hill Machine Inc. solid, four-rail forearm assembly was on its way. This is strong and rigid with four, full-length Picatinny rails at 12, 3, 6 and 9 o’clock and comes complete with barrel nut etc. Along with this came four, green ladder-style rail covers, because although they provide a large and easy grip, the cross slots in the rails are hard on the hands.

The problem with most AR15 pistol grips is that they allow the hand too far forward so making a first pad trigger finger position awkward. I mentioned this to Bob and he suggested the Magpul MIAD Grip. This is a modular system that allows you to put some depth at the rear or front of the grip. I did not want a collapsible stock, as though cool they can be a bit unstable. Likewise I did not fancy the standard A2 unit, so I went for the Ace Ltd. USA Skeleton Stock – ARFX. Looking like an FAL PARA unit, it’s 3.6 oz lighter than the A2 with a foam cheek piece and interchangeable, rubber butt pads.

The biggest problem with building an AR15 is weight, as what starts off as a light rifle tends to put on the pounds all too rapidly. I have fallen into this trap before and with practicality being my goal I was keen to shave wherever I could. This would not be easy as the H-BAR tube, which I considered essential,l does put some mass on the package. As did the larger/heavier Mk V lower receiver.

The ACE butt helped, but I wanted a bipod and didn’t want to fit an adaptor. Instead I asked Bob to machine off the first three inches of the front of the 6 o’clock rail and fit a QD stud. In this way I had removed some weight and negated the need for an adaptor too.

I wanted a decent trigger and Bob suggested a Jewell, but due to the budget I had set, I was not prepared to pay £150 for the privilege. My only other indulgence was an A.R.M.S. #35 QD Throw Lever Mount, and a set of medium height 30mm rings with 1” inserts. This gives a true QD facility with no loss of zero and as the rifle was going to be used for different sorts of shooting then two scopes would be required, which would eventually mean another #35 mount. The rifle dully arrived and I was most pleased.

However, the trigger was too heavy and in the end I got in touch with RB Precision and ordered a National Match (AR0093NMK) Two Stage assembly. This dropped straight in and really improved things and at $100 it was cheaper than a Jewell. I also found the length of pull was a bit short and so I got an ACE 1” extension pad, which sorted that out. The muzzle brake worked, but I now wish I had ordered a standard AR15 cage-type as it’s both shorter and lighter. Again shaving an ounce or two…

My choice of a 1-8” rifling twist was purely based on the fact I had used it before and it’s most efficient with heavier bullets, which gives the AR15 an ability well outside its original design/ammunition parameters. But as I planned to use lighter hunting bullets for foxing, I stupidly had not factored this in. Experimentation showed that though the rifle loved Sierra 69 BT/HP and Hornady 75 and 80-grain A-MAX bullets and shot ridiculously tight groups, it would not suffer anything lighter. With 55s, 60 and even 64-grainers producing performance well below my criteria. The 64s were particularly vexing as I had acquired a good quantity of this factory soft point load that ran at near 3000 fps thinking it would be ideal.

Though the 75 and 80-grain A-MAX are rated by Hornady as good for small game too, they are long and require a longer cartridge overall length (COL) so cannot be seated far enough back in the case to allow them to magazine feed. The 69-grain Sierra strike a good compromise as it’s ballistically efficient and can be loaded to mag length. And tests on dead animal carcasses showed they expand efficiently and drop a lot of energy into the body. Reloading these with 26-grains of Vihtavuori N140 produces 2994 fps and 1373.2 ft/lbs of energy, which is 372 ft/lbs over what the Scots require to shoot roe deer with a 22 Centrefire.

However, for plinking this was an expensive and time consuming route to go, as ammo would have to be hand-loaded for all needs. So it looks like I’ll be dusting off my Dillon RL 550 B, a reloading press I thought I would never use again.(I’m so glad I hadn’t sold it!) On reflection I would now opt for a 1-9” rifling pitch; perhaps not so efficient, but still good and a damn sight more tolerant on bullet weight.

That’s it for now; next month we’ll look at sighting options and accessories.