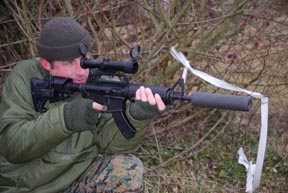 The new German Sport Guns GSG-5, which I looked at last month has doubtless got a lot of people excited, as there’s no denying the popularity of 22 semi-auto rifles that look like grown up guns. Bob Clark’s Southern Gun Company (SGC) has for many years been offering versions of the AR15 in 22 rimfire that can integrated with the full 223 Rem lower of the rifle. Initially he used the Ceiner, drop-in conversion kits, then discovered a unit made by CZ of the Czech Republic exclusively for the Victor Arms company in the USA called the V22.

The original came as an upper only, which was configured to go straight on to any standard AR15 lower. With a flat top/Picatinny-type base and side-cocking, blow-back action and a free-floated barrel the V22 gave ‘black rifle’ shooters a rimfire option. The biggest draw back compared to the prolific Ruger 10/22 was the low magazine capacity as the unit only came with a 10-rounder. Over the years I have seen many variants of this system from SGC and the latest is very much up my street, as it duplicates the CAR15 (16”) carbine version of the AR. Conversely this could also be made to look like the current, 14 ½” M4 variant, or even a standard A2, as the mix & match nature of the rifle allows for a lot of custom options.

The rifle arrived wearing the Tdi Arms collapsible, CAR butt, a standard A2 pistol grip and the newer/deeper oval plastic carbine forend. To complete the look there was a cage flash hider, A-frame front sight and a D-handle/rear sight unit. The majority of this is pleasing cosmetics, as the basic V22 action remains. What is however different is the magazine, as SGC for a few years have been making their own 25-shot design. Machined from solid stock it offers a single column feed and is dimensioned to fit the standard AR mag well. As I said before, if you already own a standard AR15 rifle, you can just order the upper and it will drop straight on to your lower, or for more money you can have a complete rifle just how you want it to look.

My one concern with any semi-auto 22 are reliability and for that read ammunition compatibility and fouling build up that causes jams; as many semis start off doing well then gradually go down hill due to the lack of cleaning, which causes stoppages. To this end when testing I always run a good selection of ammo through the gun and note what type it prefers and when/what stuff-ups occur. But first the rifle…

From the box the gun comes with a standard weight trigger; nothing amazing but this example was easy to get on with and broke at around 4-5 lbs. Though configured to look like an AR15 upper, the V22 is simpler, as the action cocks on the right side, as opposed to a rear-mounted T-handle of the 223 version.

The one aspect of the controls I did not like was the fact that even though the lower receiver has its standard bolt hold open catch, it does not function with the new upper. So there is no way of locking the action open, short of jamming something in the ejection port. I find it odd that even though the V22 was expressly produced for AR15s, the designers never incorporated what I consider a mandatory safety feature.

The 16” barrel offers a medium/heavy profile and shows the standard A2 flash hider on the end. Removing it exposed a ½ x 28” UNAEF thread, which means just about any 22 moddy will not fit as they are ½ X 20” UNF. This is not a problem as if you ask SGC will cut this form instead, though it means no A2 unit. Fortunately I had a B R Tuote T8 AR Reflex 223 moddy from Jackson Rifles, which went straight on and gave the rifle a certain look…

The SGC magazine uses the standard mag well and release catch, which is nice, as is the capacity that puts it on par with the 10/22 unit from Butler Creek. It is surprisingly heavy, so free falls from the well when the button is pressed. Also it can be easily disassembled for cleaning, which is another important consideration for a rimfire semi!

Though liking the look of the iron sights, they do have their limitations, which is around 50 yards on a good day. Though at that distance the V22 was keeping it at 1 – 1 ½”. However, you can take off the D-Handle to fit a scope. Conversely keep it on and get an optic that uses the handle’s sight gutter as a mount, which was how it was done in the old days. Quite by chance I found an old AGS SAS 6x32, Mil-Dot that offers this configuration. Looking not unlike a Trijicon ACOG it proved effective and really suits the military styling of this rifle. The X6 of the AGs means it’s easy enough to use unsupported, yet offers enough magnification for good accuracy. The scope over bore measurement is high, but the Tdi butt can be fitted with an adjustable comb, which sorts out that problem. Off a rest the V22 was shooting ¾” at 50 yards, so well up for it… Not sure if the AGS is still available, but it’s a good bet if you can get one.

Ammo consisted of Winchester’s Superspeed (H/V), sub-sonic and their Xpert Match loading, plus Lapua Standard Club. Initially filling the magazine was a bit awkward and though advertising a payload of 25, if loaded to this capacity the first 5-6-rounds would not feed, but nose dive into the breech face. However, after a few clips and using the old AR tactic of slapping the rear of the mag every few rounds loaded, the clip sorted itself out and would feed and load to full capacity without a hitch. Filling effort was not too bad and the SGC design is certainly easier to fill than a comparable Butler Creek unit. The V22 cycled this reasonably diverse cross section of ammo; even the Winchester subs and I reckon I put over 400-rounds through the gun in the course of the testing. It seemed best with the Lapua Club, even though you might automatically pick a higher velocity loading, due to the nature of the action.

In terms of stoppages I had one, where the fired case managed to get stuck behind the return spring rod, which caused the bolt to stop short of battery. More common was a failure for the hammer to cock; even though the case had ejected and the live round chambered. Initially I put this down to a low powered cartridge, as happens with 22 Long Rifle, but it showed this with all types and almost seemed to happen at a set time. I think I had five of these over 400-shots, so not a bad average and in terms of IA (immediate action) drills it was a simple matter of cycling the action to eject, re-cock and chamber.

Generally the gun ran well and I found myself enjoying it, as rimfires - especially hi-cap semi-autos - are addictive. Using the issue iron sights again initially felt odd, but I soon got back into their post and aperture system. Apart from paper punching, picking small bits of broken clay pigeon off the back stop reminded me of how practical irons actually are, though I’m as guilty as the next shooter about not even bothering with this sort of equipment.

Out of interest I also swapped the V22 upper onto my Speedmaster Mk 5 lower, which has an ACE skeleton stock and vice versa. As expected both rifles mixed and matched no problem. So from my point of view no need to buy a complete rifle, just the go faster bit.

Generally the V22 ran well and even the occasional and expected stoppages were not a problem to sort. The iron sights were good, as the rear unit is micro adjustable so you can get the gun to shoot where you want it to at sensible distances. The collapsible stock is just one option, as you could also opt for the standard fixed butt, or ACE skeleton unit, as I have on mine. The new style forend fills the hand well and provides good hold, though I found the A2 pistol grip a bit skinny.

The irons were kinda’ fun, but on reflection a scope is far more useful and the AGS 6x32 was an ideal solution that suited the V22 perfectly. Likewise you might want to put a can on, despite its range-orientated build, so forget the flash hider and get the muzzle cut ½ x 20” UNF. These days you can get all sorts of brakes cut to this thread form that are both cosmetic and in some cases effective too.

Though mechanically no different the SGC V22/CAR15 is for those who know what they want. From my experience the semi-auto, rimfire upper is a nice addition to your 223 Rem AR15 and I have to say that though not starting the test with the intention I am now quite tempted by one…