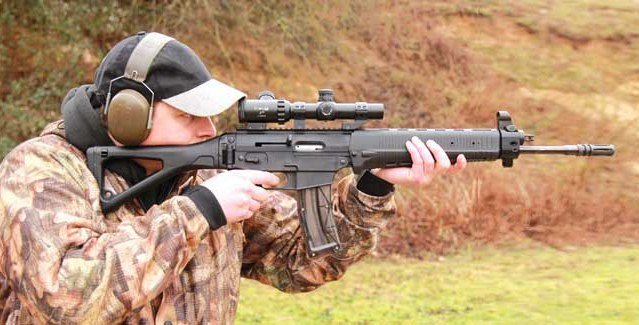 Though not the first military 22 look-alike the SIG522 is one of the better off-the-shelf designs that to a degree has withstood the test of time and newer guns coming into this group. The rimfire 522 is based on the centrefire SIG556 (5.56x45/223 Rem) service rifle popular with both military and law enforcement.

These can be used as cost-effective trainers but have become massively popular with the civilian market in America where they are designed and built by SIG Sauer Inc USA. The layout goes for a right side folding butt, with a polymer forend and 16.6” barrel.

The major difference was the 556 used a gas/piston operating system and the 522 as befits the calibre was a blow-back. Plus and though both guns use a side-folder the 522’s was telescopic so gave a variable length of pull (LOP). It was quite short and a 1” spacer/pad was included should you need to extend the LOP. The 556 has what is called a Swiss stock which is a fixed length.

Since their introduction into the UK around five years ago the 522 has gone through some changes in terms of importer, build and price as we shall see. Originally distributed by Garlands Ltd this changed last year to the Sportsman Gun Centre and on test here is the new version of the 522 Classic, which could be termed the base model. More pleasing and unusual in this day and age the price has gone down considerably in some cases too and a few extras have now become standard issue!

Sportsman also distribute the SWAT version, which is identical to the Classic apart from an alloy 4-way, Picatinny forend rail. Please note this is not a free-float despite how it looks due to the way it attaches to the forward/dummy gas block.

Newest of all is the Target, which differs by having a Hogue, free-float forend and a 20” medium/heavy barrel and a 1” bodied, 1.75-5 x 20 scope with Dual-X reticule in a set of medium-height rings. Turrets are capped and offer ½ MOA @ 100 yard corrections. The Classic and SWAT now come with iron sights, which were originally - and from what I could make out - an extra with feed from a 25-round Black Dog magazine. The Target has no irons and feeds from a 10-rounder. But in terms of controls etc all models are identical.

The build goes for a hinge-open receiver much like an AR15 with the lower section being polymer and the upper being extruded aluminium with an integral Picatinny rail. Cocking is by a large, plastic-covered handle on the right that reciprocates with the action. At a push it can be used as a forward assist if you get a short round (bolt not closed properly). On the left is a manual-only, bolt hold open catch, last round hold open is accomplished by the mag platform rising to block the bolt. Both the magazine release button and safety catch are ambidextrous and are similar to an AR15 in operation, position and function.

Rear left of the receiver is a large, D-shaped button that unlocks the butt, which swings forward and to the right, and locks by a lug at the base of the forend. Early rifles had a habit of the locking clip in the butt staying attached to the forend when you swung them open, this does not happen now. The Swiss stock now fitted is a skeleton-type with a slim rubber pad and offers a 13 ¼” LOP, a tad short but workable. I thought SIG would have included the original extension pad as the fitting looks the same and it would be useful for people with longer arms.

The lightly tapering forend is both deep and wide and provides a decent hold as does the pistol grip, which has a storage trap in the base. Also included are a set of three short Picatinny rail sections that fit up front, useful for lights, lasers or a forward grip. As I recall these too were extras on the originals.

The 16” barrel is profiled at the front and ends in a cage-type AR15 flash hider and is threaded ½ x 28 UNEF (Unified National Extra Fine). These days some 22 rimfire moderators are cut for this thread. The dummy gas block is now aluminium, whereas the original was cast steel and also offered a forward sling loop. Now instead the left side is threaded and I would guess will accept an Uncle Mike’s machine QD sling stud or similar. An eye is moulded into the butt cut-out will accept a QD clip as a rear sling fixing point. Extra storage is also provided in the forend, as the dummy gas regulator is in fact a plug that when removed allows access to a tube inside and above the barrel.

I used to own an original 522 and one of the things I always wanted was a set of iron sights for it. For 90% of the shooting I did with it I fitted a low power variable scope, but I do like irons and feel they are a discipline that should be embraced and not ignored like the majority of British shooters do.

At the time there were none forthcoming from SIG even though pictures of the early rifles showed them. I opted for a set of fold-down Samson sights. Now though the rifle comes with its own set! Up front is the same as the 556 with a one-piece steel, hooded A-frame with integral blade. At the rear and unlike the multi-aperture dioptre type of the 556 is a Williams Gunsight unit that clamps onto the rear Picatinny rail. It’s a simple, angled block that is windage and elevation adjustable by jam screws. The small aperture can be unscrewed if you want a bigger hole to let in more light. They are more than adequate for task and also mean your good to go straight from the box; I set them up for a 50 yard zero.

Weighing in at 7 lbs loaded and 35.1” long the new SIG522 Classic is a handy little piece that visually looks and handles better than the earlier version. I ran the rifle on a number of brands of 22 LR – Fiocchi standard velocity (40-grains), Winchester Laser high velocity (36-grains) and the RWS SEMI AUTO (42-grains) this last is a purpose-built load for this type of rifle. As an aside I have also heard that Eley will soon be offering their own 22 semi-automatic load too. I fitted a C-More x10 1-10x24 compact scope in Sportsmatch, medium/high, reach-forward, 30mm mounts.

The trigger shows about ½” of springy take up followed by a reasonable 4-5 lb break, it could be a tad lighter, but it’s manageable and readable. Shooting at 50 yards supported off the bench the Classic was holding an inch with the scope and did not seem to have a preference towards any particular ammo make. Experience has shown me that most of these rifles seem to work better with standard velocity ammunition. HV is good but it uses a lighter bullet to achieve the extra speed and when the action gets gummed up as they all do they do not seem to have the rearwards energy to overcome the bolt so easily. But with the few unavoidable exceptions of duff ammo, which happens with 22 LR the 522 performed reliably enough.

Control-wise the left side safety catch lever is a tad short for easy operation by the firing hand thumb, I found it easier to use the R/H paddle instead. The ambi mag release is good with the empty free falling from the well. I have never liked the ersatz hold open provided by the mag platform but it’s better than nothing. Be aware the bolt will shut when you remove it!

The SIG ran reliably and I put about 400-rounds through it with no serious problems. Stripping is like an AR – push out the rear body pin, open the receiver and pull back the bolt until the cocking handle is in the square cut out at the rear of its slot then pull it free and slide the assembly out.

Having shot all three rifles in the past my choice would be the Classic, however, I think the SWAT will be top choice just for the look, though the longer/heavier and true free-float barrel of the Target will also have an appeal. Whatever, prices are little short of amazing when compared to a few years ago. The Classic today is £499.99 compared to £745 and the SWAT is £599 compared to £849. Oddly enough the Target has gone up from £659 to £700 but given you get a scope and bases you can’t really complain!