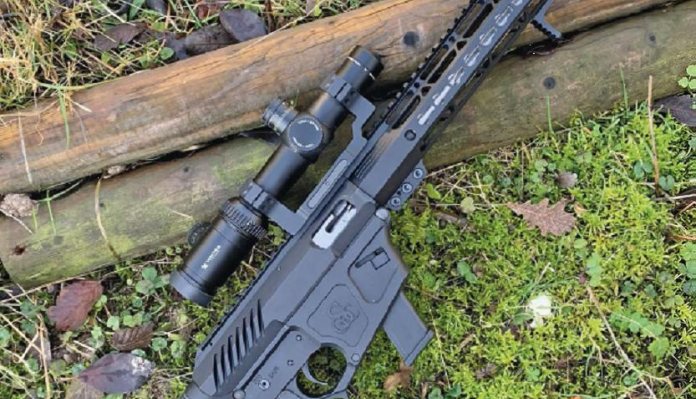 Southern Gun Co (SGC) first came to my attention with their radical Speedmaster straight-pull AR15. Manually-operated (Section 1) ARs have been around since the 1988 self-loading rifle ban, but not like this! SGC realised that operation by the original, rear-mounted T-handle was not ideal, due to the lack of leverage and the effort required to overcome primary extraction.

The solution was a new and improved upper receiver with ambidextrous, side-cocking handles and a stainless/fluted, 20”, heavy, free-float barrel which made them tack-drivers.

Over the years SGC has offered some unusual items, including the longbarrelled (Competitor) single-shot pistol in .44 Magnum, a .22 rimfire semi-auto AR and .22 upper receiver conversion as well as the ill-fated, LR (Lever Release) series. But, you might know less about their LA (Lever Action) line, which in a world of shooters using lever-action designs over 150-year old, stands out as a serious leap forward in technology.

The LAs were pistol calibre only, available in 9mm Parabellum (LA9) and US .30 Carbine (LA30), although, 10mm AUTO and even .45ACP were possibilities too. I have owned both models, again built around an AR chassis, they used a fully hinged pistol grip. This connected to the bolt carrier by a linkage that passed up through the action to cycle it. Feed was from an Uzi mag (9mm) or M1 Carbine clip (.30) then, later on, SGC designed and produced their own systems.

Of the two, the LA9 proved the most awkward to operate, as initially, they stuck with the spring/plunger ejector in the bolt face. This meant that unless you operated the action really fast, the empty case would clear the chamber too soon and drop into the action. This was partially remedied by changing to a bladetype ejector behind the magazine. The longer, .30 Carbine case had no such problems. And just as the Speedmaster was created to offer an improved and more practical manually-operated AR, the LAs were a modern lever-action that would make the older types redundant.

However, the advent of the LR guns in both pistol and rifle calibres would have seemed to be the ultimate evolution of both designs. But their banning forced SGC to think again and has led to their latest product; the 9mm Lever Action Rifle (LAR), or LA9 2.0 as I like to call it.

I remember Bob sending me a picture and some information on the LAR before the COVID-19 lockdown last year, with a promise of getting me a tester ASAP. The LAR is AR-like but uses new, purpose-built upper and lower receiver halves along with the swept-back mag well of the LR9. Feed is from a Glock 17 magazine, which is a smart idea. Although 9mm is currently the only option, Bob is not ruling out similar calibres for the future. My choice would be 10mm AUTO!

Although I liked the original LA guns, I always thought the operating stroke of their hinged pistol grips as to movement, length and angle was not ideal. The LAR does away with this and literally takes the old Winchester 94-style operating lever and mounts it vertically in front of the pistol grip, to offer a shorter and more practical system. Inside is a simple, sliding bolt that locks by a rising lug into a steel pocket in the underside of the upper receiver. This is operated by a set of rollers on arms that connect to the block’s toggle-like linkages. The end result is a shorter and more efficient stroke.

Taking the rifle apart shows that the LAR has gone back to using a spring/ plunger ejector, but as the operating stroke is short and for that matter faster, ejection is much improved. Although, I would say, as with any lever, or pump-action mechanism; cycle it fast and hard for best reliability.

The trigger mech is standard AR and is workable from the off, although it seems likely ‘drop-in’ options will fit. To accommodate the position of the operating lever, the standard A2 pistol grip has had its front strap machined flat, Bob is working on an improved design. Build quality is as ever, excellent, the lower receiver features a swept-back mag well with the SGC logo machined either side. Currently, the release catch is on the left, but there’s an ambidextrous version in development, as the Glock mag is compatible as standard now. Up-front is an in-house, free-float, K-Mod forend with full-length Picatinny rail that encases the 16”, heavy/ fluted barrel with 1-10” twist rate.

At the rear is a standard buffer tube (no spring) with a CAR15 telescopic butt that is basic but functional. The LAR is built as an entry level gun with options on improvements, furniture, and accessories. For example, this one wears a multi-port muzzle brake, hardly needed on a 9mm, but check out their GUN BUILDER facility on the website, where you can create something to your personal needs. On that point, the standard gun is around £1850, with prices rising to £2400 given what you want.

As expected; this is a well-made, presented, and conceived firearm that offers a shooting dimension far above its peer group! Although no Marlin 1894, it’s none the less a bona fide, Section 1 lever-action mechanism. Yes, it feeds from a box magazine, but so do other modern and classic firearms in this class: Browning BLR, Ruger 96/44, Savage 99C, Sako Finnwolf and Winchester’s 1895 etc.

The LAR comes bare-backed, but the Pic rails will allow the fitting of iron sights, a low power compact variable scope or a red dot. All have their pros and cons, but I feel a 1-6x24 or similar with illumination would be the best bet. Ammo initially went to PPU and Remington 115-grain plus MagTech 124-grains, all FMJ. Later, I added some 124-grain Remington Golden Sabre jacketed hollow points (JHP) and two reloads.

The operating stroke describes an approximate arc of 40º with 3” of movement that keeps it more in the vertical plane, offering a more natural and comfortable cycle over the original LA series. This also translates into a short feed and ejection cycle, as the 19mm case exits the chamber cleanly without problems.

I scoped up for the accuracy test and found at 50 yards the gun shot around the inch but seemed to do a bit better with the heavier 124-grain load. At 100 it was doing 2-3” without too much problem. I was keen to see what reloads would do and contacted Henry Krank & Co, who kindly supplied Lee’s Deluxe, four-die set with carbide sizer and taper crimp units. Bullets went to GM lead hard cast round nose (LRN) and Sierra jacketed hollow point (JHP) both being 125-grains, powered by 5-grains of Ram Shot True Blue powder.

The reloads and the Golden Sabres proved interesting. All shot well, and surprisingly the LRN came out the best with a 1” group at 50 yards. Both JHPs had issues with feed, as their large nose cavities tended to occasionally catch on the chamber face if you operated the action fast, they fed fine with a slower movement. None of the FMJs or the LRN had any problems at all.

9x19mm is hardly a ballistically efficient cartridge, with low BCs, but that was never its purpose. However, I feel heavier bullets (125-grains +) might prove better for other uses like long range Gallery Rifle. Although not its primary purpose, I can see a few thoughts turning to a short range foxing tool, as it would be easy enough to fit a moddy, with something like the 124-grain Golden Sabre JHPs, or similar reload. But, for general use out to 100 yards your average 115-125-grain loads are fine.

In use, the LAR impressed! Reliability with RN/FMJ was 100%. Recoil is minimal, so control is improved, which is very evident in the slowmotion video I did, which is now posted on Gun Mart TV; check it out. The Glock mags feed well but are initially stiff to fill to capacity, I’d recommend leaving them loaded for a week or so to get the kinks out.

With a full mag, loading is best done with the bolt open, otherwise, insertion is hard. The operating stroke is short, but you still need to ensure you fully cycle it, which is just a matter of practice. Bob Clark has not disappointed with his new LAR 9mm rifle and has built a better mousetrap! The classification is Section 1, so no different to other lever-action designs, old or new.